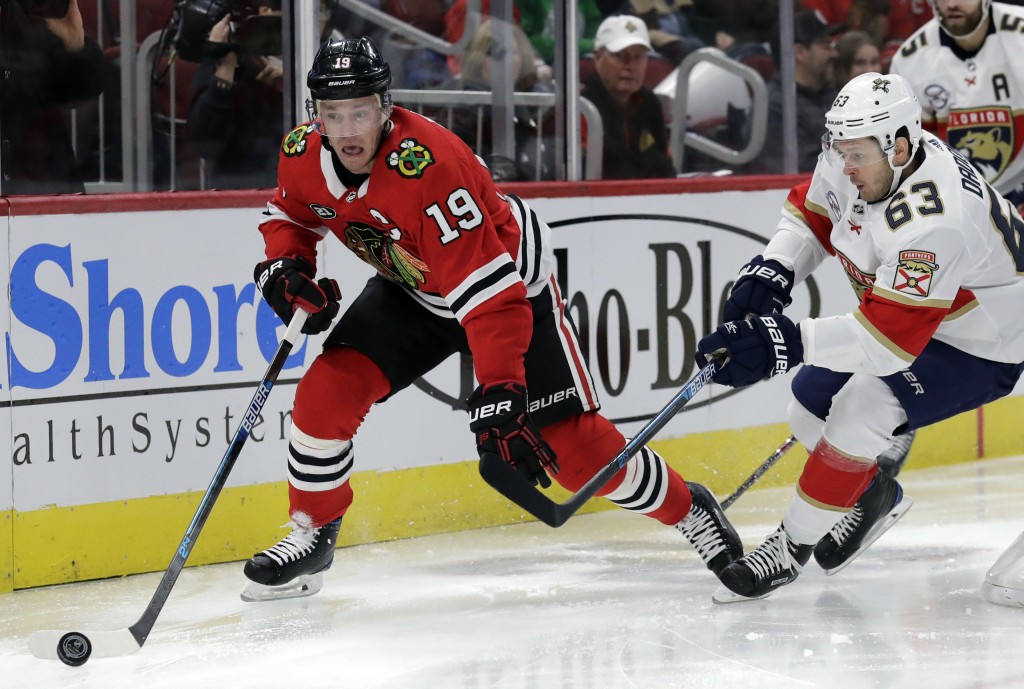 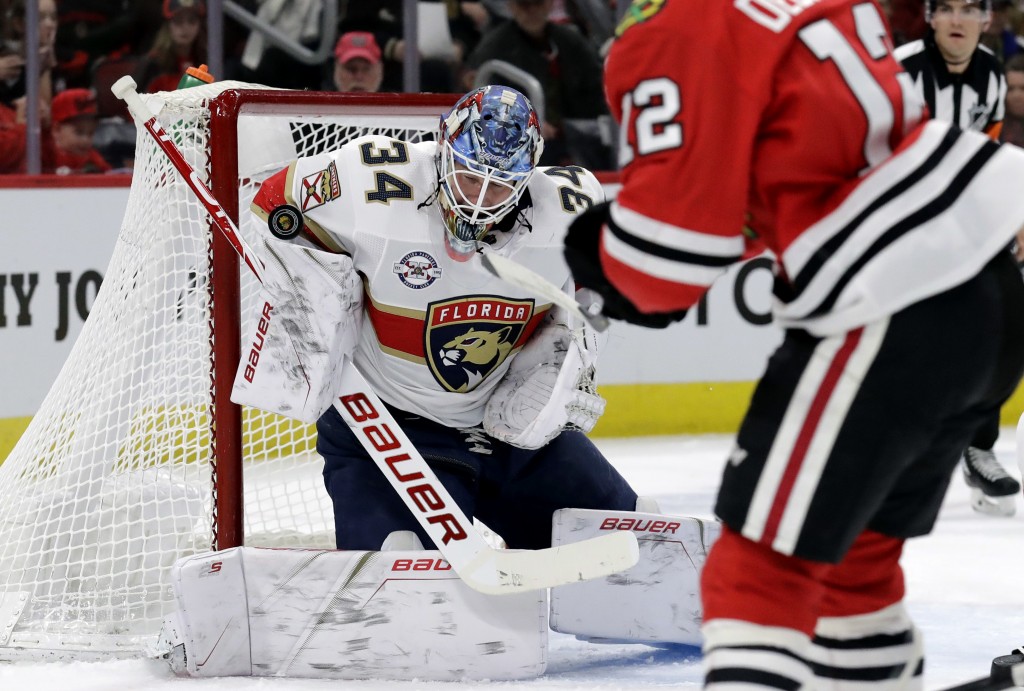 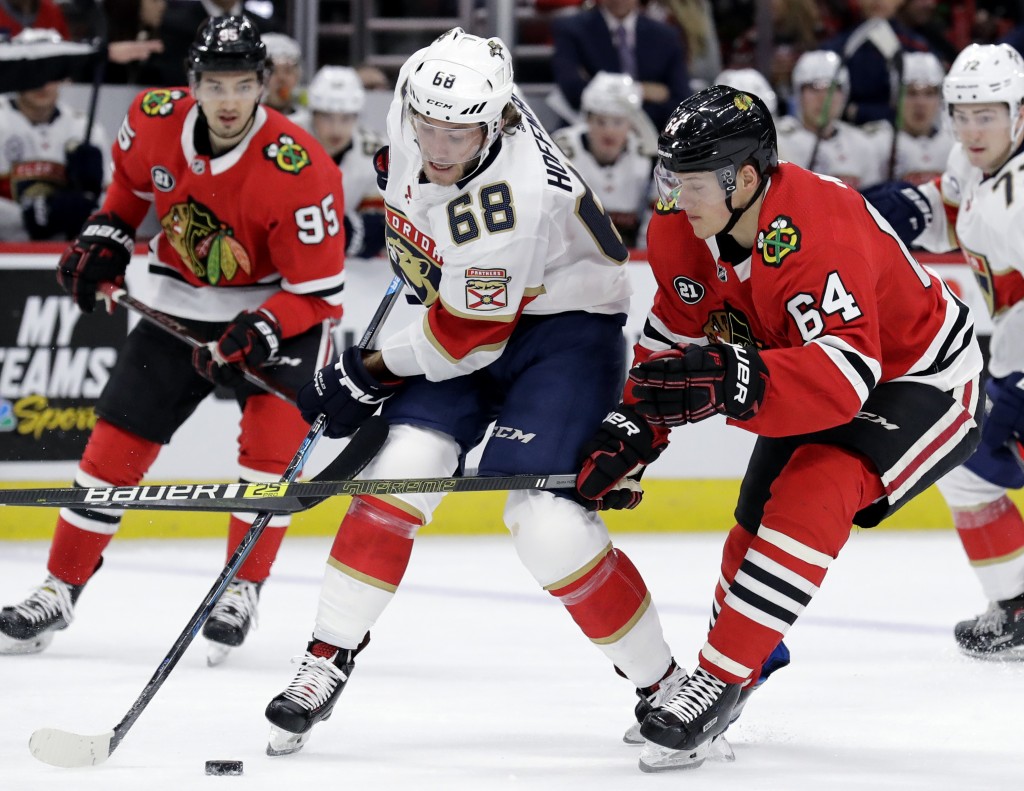 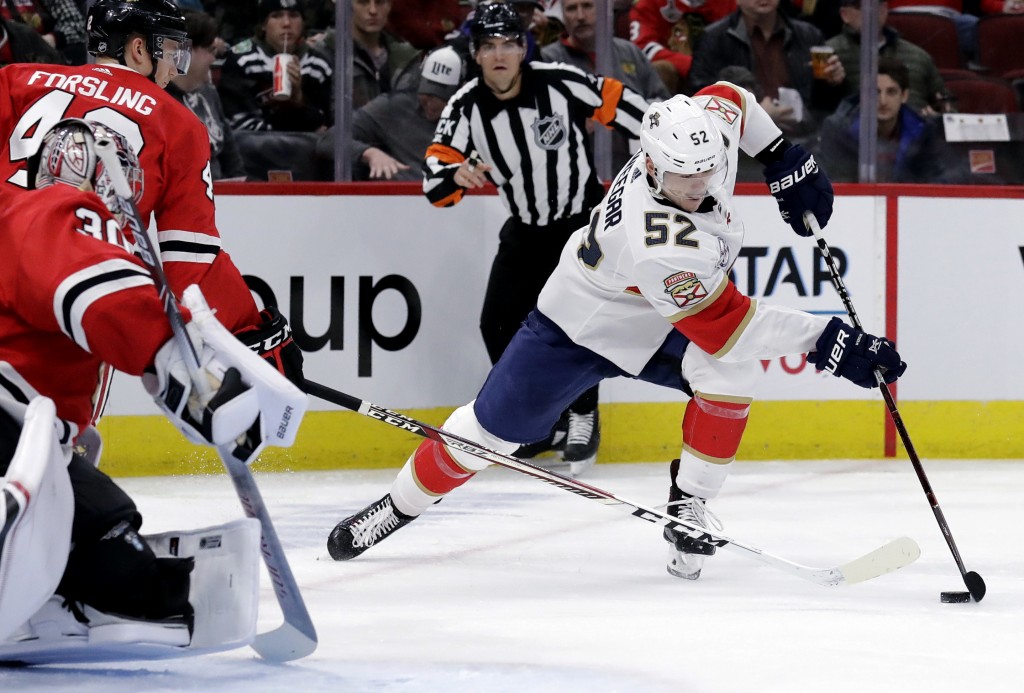 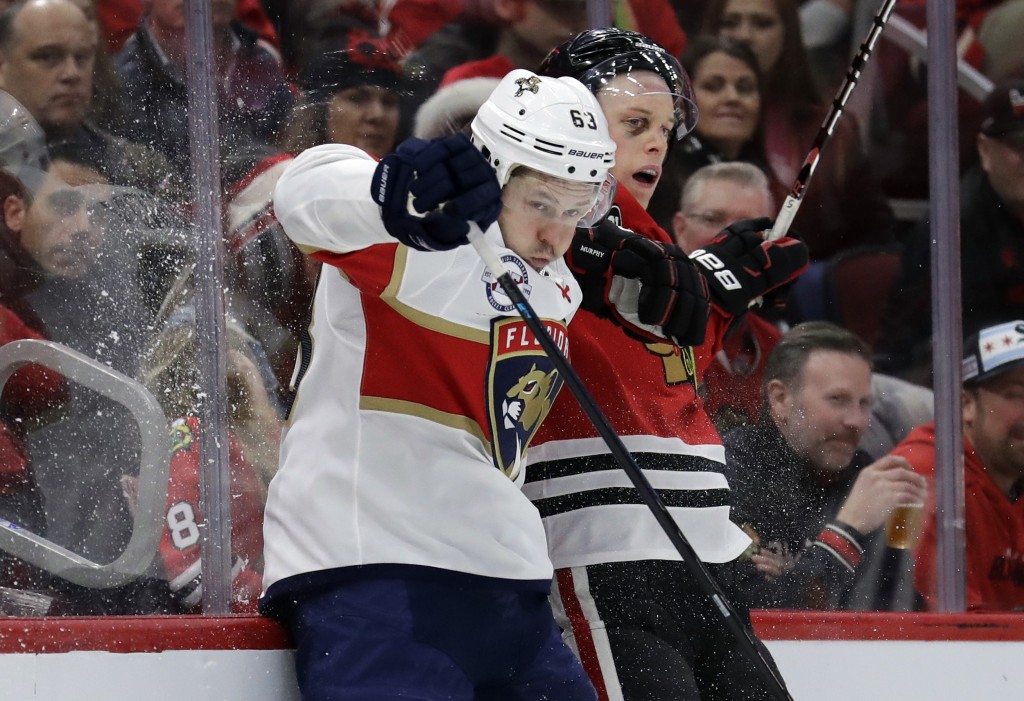 Denis Malgin also scored and Frank Vatrano added an empty-netter as the Panthers won road games on consecutive night and prevailed for the fourth time in five games overall. Hoffman's goal was his 17th, tying him for the team lead.

Dylan Strome had a goal and two assists for the last-place Blackhawks, who had their season-high, three-game winning streak snapped. Connor Murphy scored his first goal of the season and Alex DeBrincat netted his 17th, moving into a tie with Patrick Kane for the team lead.

James Reimer made 26 saves for Florida and Cam Ward stopped 21 shots for Chicago, as No. 1 goalie Corey Crawford missed his fourth game with a concussion.

Hawryluk, a 22-year-old center, skated in his fifth game since being recalled from Springfield of the American Hockey League.

Murphy opened the scoring at 13:32 of the first period, connecting in his ninth game after missing Chicago's first 30 while recovering a back injury. After taking Strome's feed from behind the net, his shot from the right circle beat Reimer on the glove side.

Hawryluk tied it just under three minutes later with his first goal and point.

After hustling past Chicago defenseman Carl Dahlstrom, Hawryluk narrowly beat Ward to a loose puck as the goalie came out. Hawryluk skated to the right and fired into an empty net.

Hawryluk put Florida ahead 2-1 at 2:35 of the second. He skated behind Chicago defensemen Duncan Keith and Erik Gustafsson, took a long pass from Mike Matheson and beat Ward on the stick side after breaking in alone.

DeBrincat scored a power-play goal off a series of bounces at 4:56 to tie it at 2. DeBrincat's pass across the crease caromed off Strome, Matheson and the right post before bounding back to him at the left side of the crease.

Hoffman's power-play goal, on a rising screened shot from the point, put Florida ahead 3-2 with 3:11 left in the second. McCann buried a rebound of a long shot by MacKenzie Weegar, scoring past a diving Ward 31 seconds later to make it 4-2.

Malgin was wide open at the right side of the crease and converted a feed from McCann to make it 5-2 just 59 seconds into the third. Strome tipped in a pinpoint backhanded feed from Kane at 9:35 of the third to cut it to 5-3.

Vatrano's empty-netter with 1:01 sealed it.

NOTES: Hawryluk, drafted by Florida 32nd overall in 2014, led Springfield of the AHL with 28 points (seven goals, 21 assists) when he was recalled. . Blackhawks 25-year-old C Jacob Nilsson, recalled Saturday from Rockford of the AHL, played in his first NHL game. ... The Blackhawks beat the Panthers 5-4 in overtime on Nov. 24 at Sunrise, Florida, in the other regular-season meeting. . Chicago C Marcus Kruger sat out his third game (concussion). . Florida was without LW Jamie McGinn (back), C Derek MacKenzie (shoulder), C Vincent Trocheck (ankle) and C Nick Bjugstad (upper body).