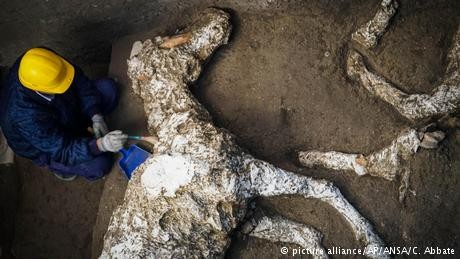 Italian archaeologists have unearthed the petrified remains of a harnessed and saddled horse in a stable tied to an ancient villa outside Pompeii.

Osanna said that the remains of two or three other horses were also found.

The news agency speculated that the horse may have been prepared to allow the military officer to escape or run to the rescue of citizens when the volcanic eruption of Mount Vesuvius destroyed Pompeii, near present-day Naples, in 79 A.D.

The eruption buried the once prosperous city in ash and rock, preserving buildings and even the petrified bodies of people in their final moments.