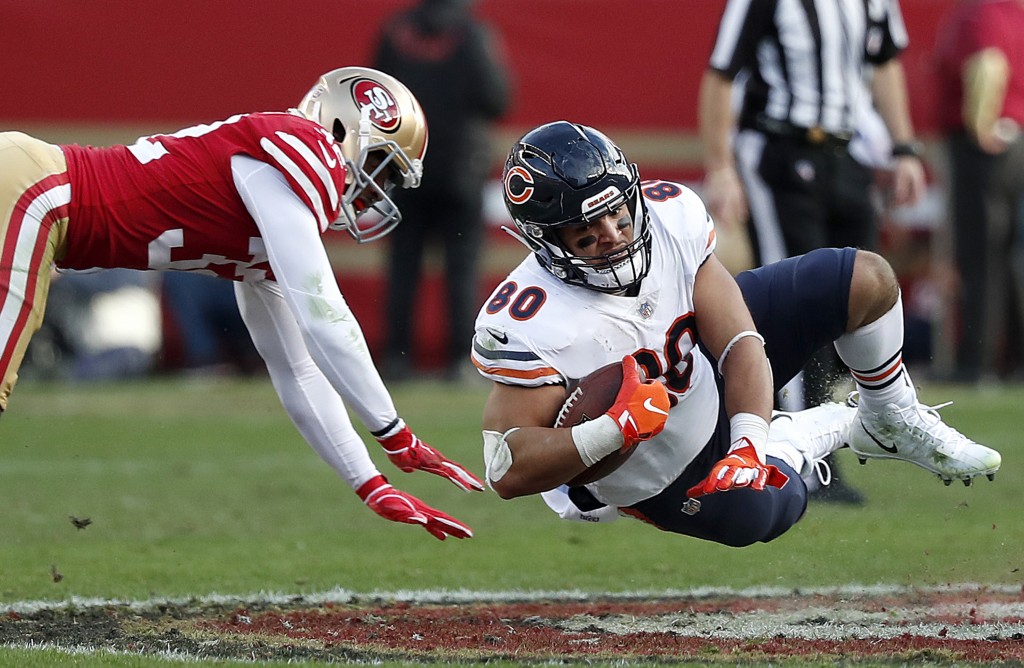 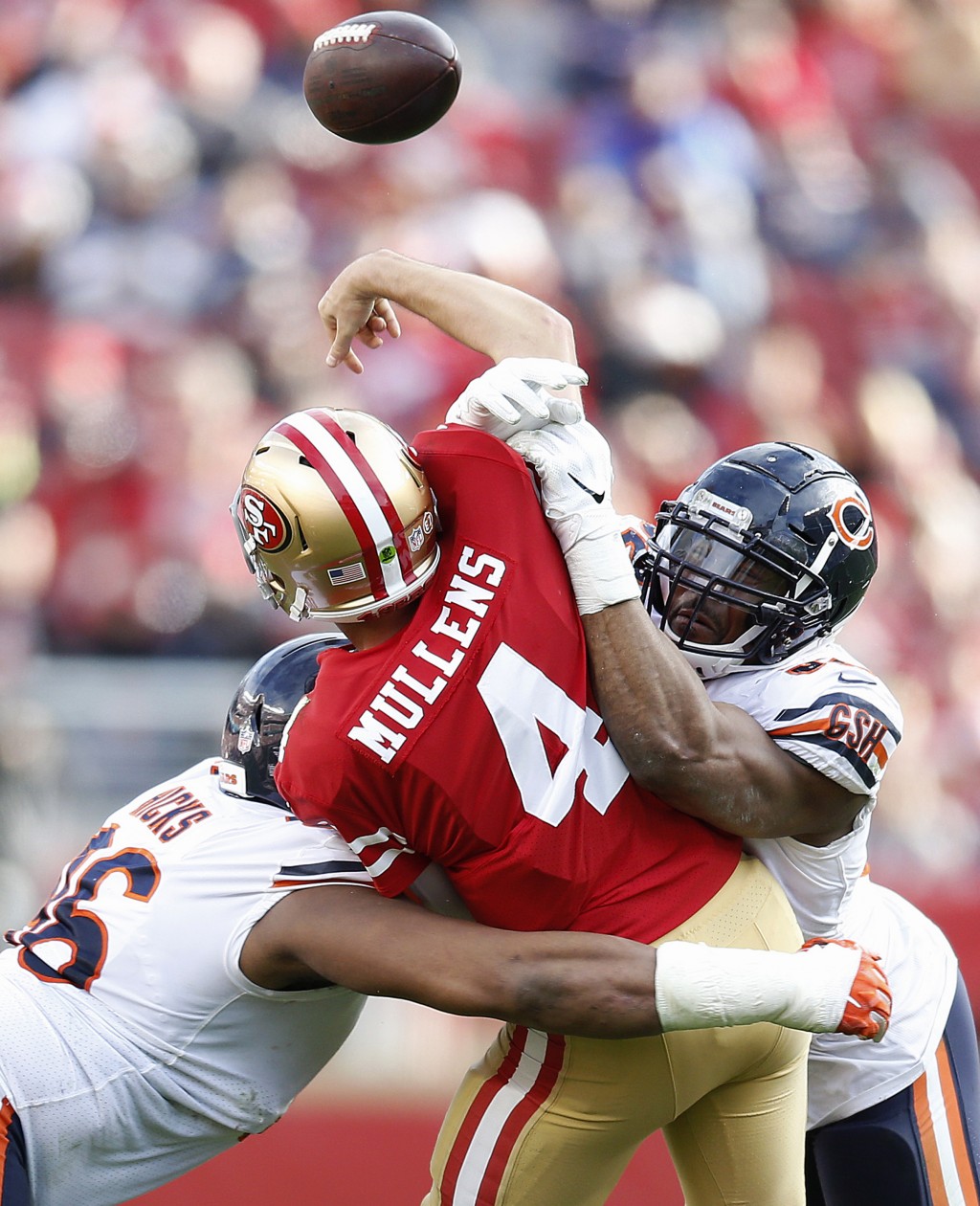 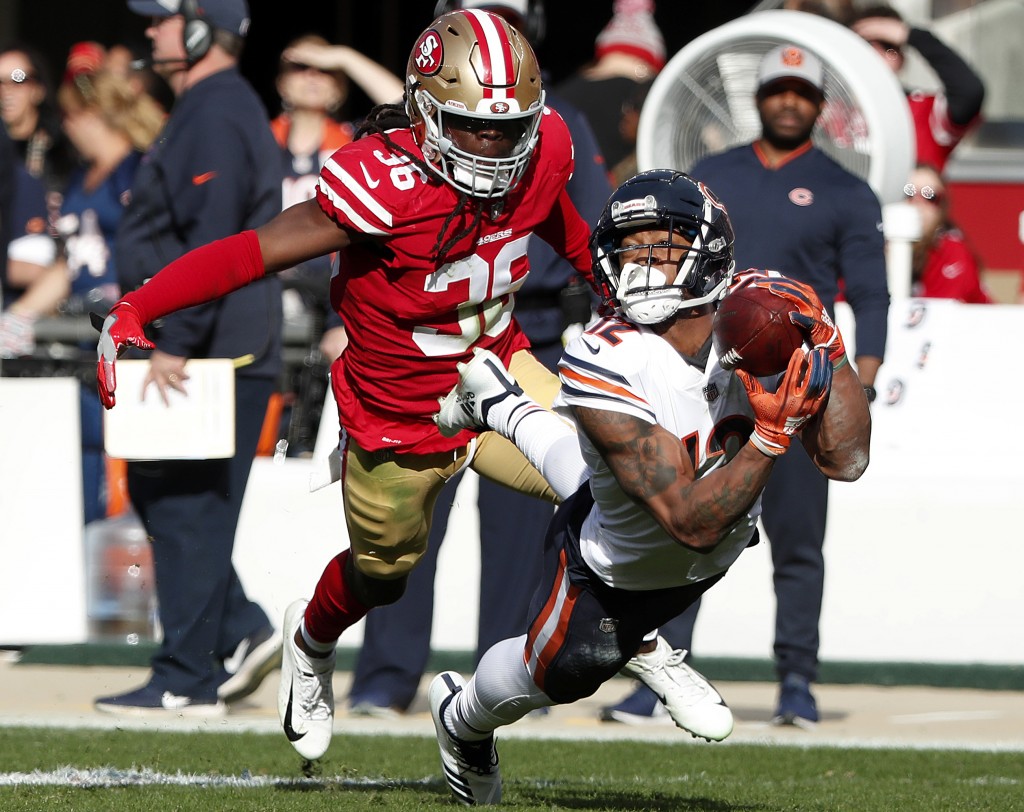 SANTA CLARA, Calif. (AP) — Mitchell Trubisky threw one touchdown pass, Jordan Howard ran for another score and the Chicago Bears survived a fight and a late fumble to earn their eighth win in nine games, 14-9 over the San Francisco 49ers on Sunday.

Danny Trevathan made a key interception in the fourth quarter and Chicago's stout defense kept the 49ers out of the end zone to clinch at least the third seed in the NFC playoffs. The Bears (11-4) can earn a first-round bye with a win in the season finale and a loss by the Rams.

Robbie Gould kicked three field goals for the 49ers (4-11), who had their two-game winning streak snapped.

The game turned feisty in the fourth quarter, when San Francisco safety Marcell Harris hit Trubisky after he started sliding on a scramble near the Bears bench. Trubisky's teammates took exception to the hit and a scuffle ensued with punches being thrown and San Francisco cornerback Richard Sherman and Chicago receivers Joshua Bellamy and Anthony Miller all getting ejected.

The Bears converted a fourth-and-1 sneak by Trubisky from their own 35 with 4:19 to go shortly after that. After the two-minute warning, Chicago appeared ready to ice the game on a third-down completion to Allen Robinson. But instead of going down to allow the Bears to run out the clock, Robinson kept running and had the ball knocked out of his hands by Tarvarius Moore.

Greg Mabin recovered at the San Francisco 24 with 1:52 to play, but the Niners were unable to convert when Nick Mullens threw a deep incompletion on fourth-and-4 from the Chicago 45 instead of scrambling for the first down.

The Bears struggled to do much offensively all game but managed a TD drive on their final possession of the second quarter and first of the third quarter.

Trubisky capped the first with a 4-yard pass to Miller and then completed all seven passes on a 90-yard drive that took 7:43 and ended when Howard scored on a 2-yard run that made it 14-9.

The Niners got in position for a possible go-ahead score in the fourth quarter before Mullens' pass deflected off Marquise Goodwin's hands for an interception by Trevathan with 7:37 to play.

Gould kicked three field goals in the first half against his former team after making all five in a 15-14 win at Chicago last year. Gould was cut by the Bears before the 2016 season. Cody Parkey missed a 37-yard field goal for Chicago in the first quarter.

The 49ers finally got a takeaway. Trubisky threw a lateral to Tarik Cohen in the second quarter that ended up in a fumble recovery by DeForest Buckner. The Niners had gone a record six full games and 399 defensive plays without a takeaway since last recording one Oct. 28 at Arizona. San Francisco added the second fumble recovery and has just seven takeaways on the year, on pace for its fewest in a season.

Bears: Robinson left the game after making a diving 43-yard catch in the first quarter before returning.

49ers: RB Matt Breida (ankle), WR Dante Pettis (left knee) and TE Garrett Celek (concussion) all left the game with injuries in the first half and didn't return. CB K'Waun Williams left in the second half with a knee injury.