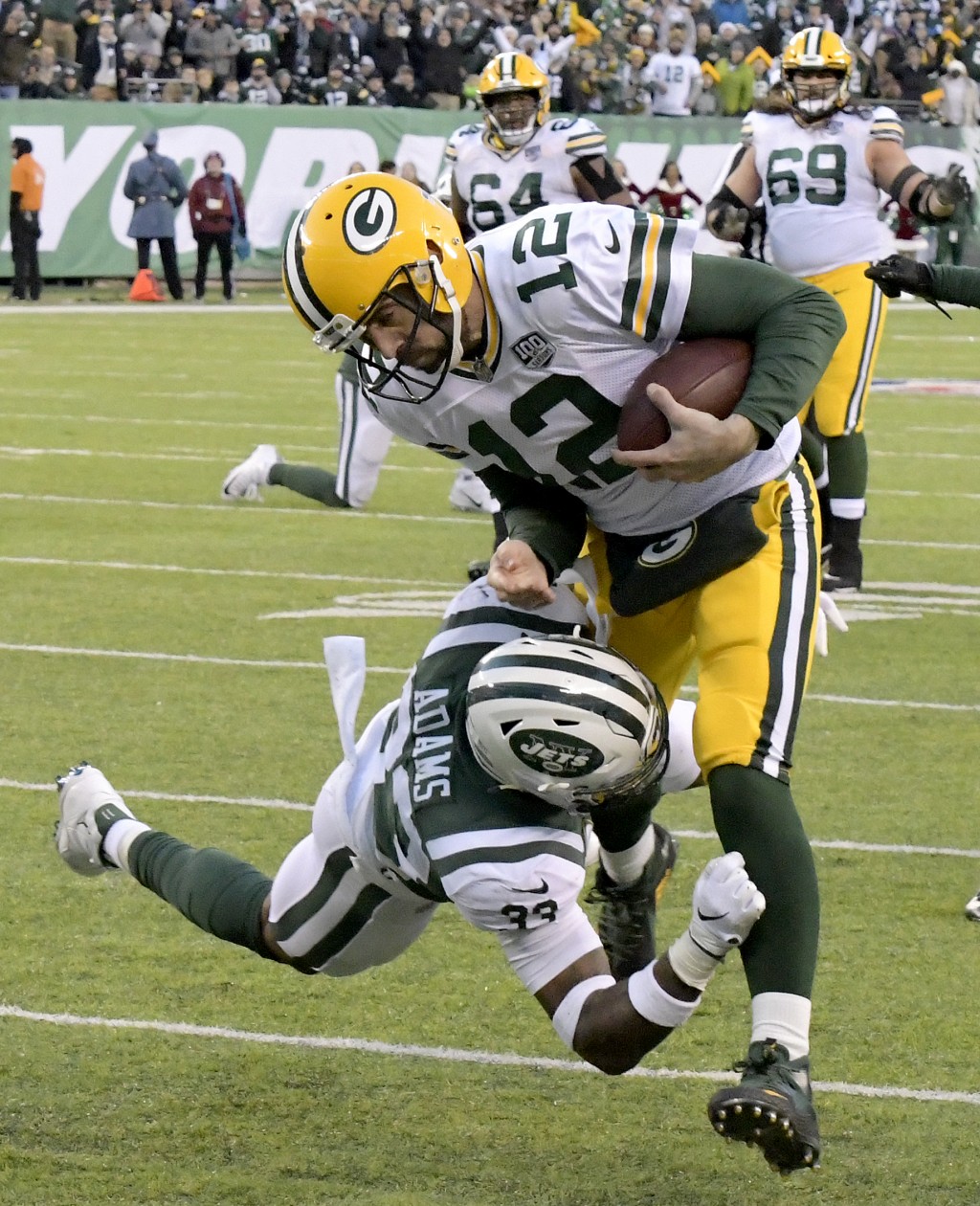 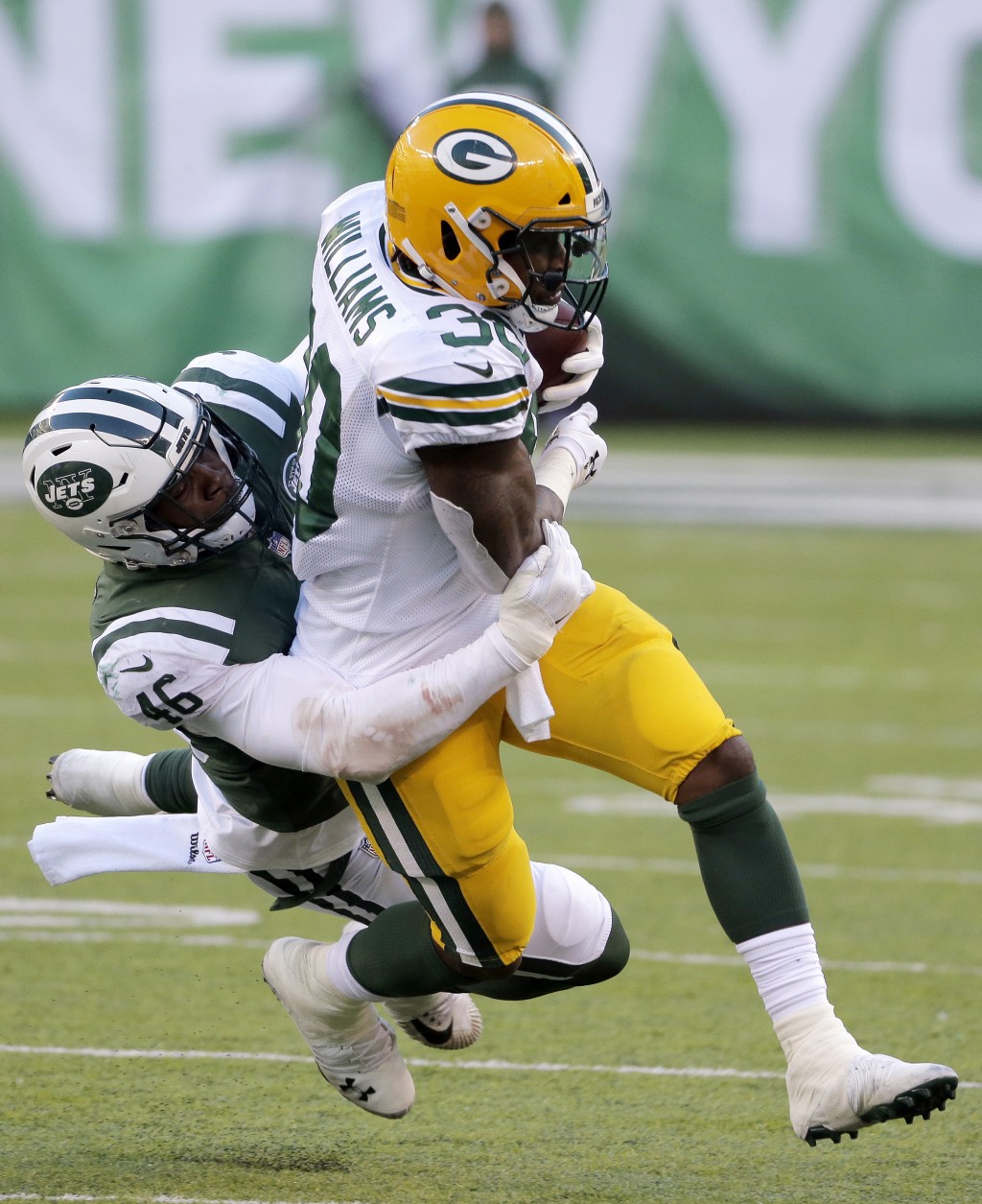 The victory was the Packers' first on the road this season — snapping a nine-game skid away from Lambeau Field dating to last season — and it prevented them from becoming the first Green Bay squad since 1958 to go an entire season without a win away from home.

And this one was all on Rodgers, who was masterful in the fourth quarter and the overtime period for the Packers (6-8-1). He threw for 442 yards and two touchdowns, and also ran for two scores.

The loss for the Jets (4-11) overshadowed a dazzling performance by rookie quarterback Sam Darnold, who threw for a career-high 341 yards with three touchdowns — but never got a chance with the ball in overtime. It was likely the final home game for coach Todd Bowles, who is expected to be fired after next week's game at New England.

The Jets were done in by penalties, getting called for a whopping 16 that cost them 172 yards. Bowles was critical of the officiating crew, saying some of the calls against New York shouldn't have happened.

After the Packers won the OT toss and elected to receive, Rodgers took over — as he has so many times throughout his career.

Rodgers ran it in — but right tackle Bryan Bulaga was called for holding. On the next play, Rodgers found Adams in the back of the end zone for the victory.

That all came after Rodgers went over a pile and reached past the goal line for a go-ahead 1-yard touchdown with 1:13 left in regulation, giving Green Bay its first lead of the game. Rodgers then ran it in for the 2-point conversion to make it 38-35, finishing off a terrific drive during that included a 23-yard run to get the ball to the 1.

Andre Roberts, selected to his first Pro Bowl earlier in the week, returned the ensuing kickoff 51 yards to put the Jets in good shape. Darnold completed passes of 9 and 14 yards to get the Jets to the Green Bay 15. But three straight passes fell incomplete and New York settled for a tying 33-yard field goal by Jason Myers with 17 seconds left in regulation.

Rodgers took a knee, sending it to overtime.

Darnold was 24 of 35 passing with TDs to Robby Anderson, Chris Herndon and Elijah McGuire, who also ran for a score.

With the Jets leading by one, Darnold marched New York down the field on its first possession of the second half to stretch the lead to 28-20 on a 5-yard TD pass to a wide-open Herndon with 4:21 remaining in the third quarter.

New York's special teams unit then came up big when Anthony Wint — just promoted from the practice squad — forced J'Mon Moore to fumble and Rashard Robinson recovered for the Jets at the Packers' 18. Three plays later, Darnold tossed a short pass to McGuire, who took off to the outside and scampered down the sideline into the end zone for a 20-yard touchdown that made it 35-20 with 3:50 left in the third quarter.

Mason Crosby's 38-yard field goal cut the Packers' deficit to 12 with 11:45 remaining in the game.

Rodgers' 1-yard run with 6:32 left made it 35-30, capping a drive that was helped by consecutive pass interference penalties on Skrine and Jamal Adams to get the ball down to the 1.

Roberts returned a kickoff 99 yards for a score late in the first half, the second of his career, to highlight a solid outing by New York's special teams unit.

Rontez Miles took a direct snap on a punt on fourth-and-1 from the Jets' 31 in the fourth quarter and ran up the middle for 4 yards and a first down. Wint also had the forced fumble earlier in the game.

The one hiccup came on the opening drive of the game, when Jason Myers — picked for his first Pro Bowl — was wide left on a 45-yard attempt.

During a 14-yard reception by Equanimeous St. Brown late in the first half, Bulaga and Jets defensive end Leonard Williams got into a shoving match — and Williams was ejected for throwing a punch. That gave the Packers the ball at the Jets' 7.

Jamaal Williams took the ensuing handoff, cut down the left sideline and was hit by Jamal Adams. But he stayed in bounds and stretched his body — and the ball — over the goal line for a TD that made it 21-14 with 1:33 left.

Packers: LG Lane Taylor hurt a knee in the first quarter. ... CB Jaire Alexander injured his groin in the first half and didn't return.

Jets: At New England next Sunday.