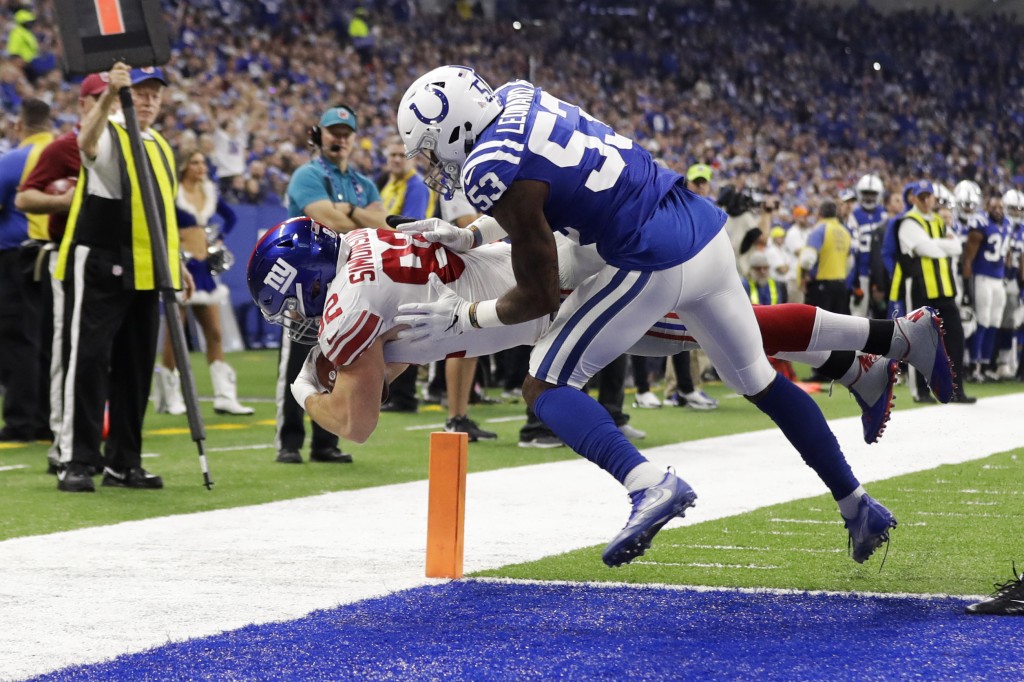 INDIANAPOLIS (AP) — Andrew Luck hooked up with Chester Rogers for a 1-yard TD pass with 55 seconds left Sunday to give the Colts their only lead of the game and a 28-27 win over the New York Giants.

Indy (9-6) has won eight of nine to keep itself in the playoff hunt heading into the regular-season finale at Tennessee. The Colts, who won their last six home games after starting 0-2, would win the AFC South with a victory over the Titans and a loss by the Houston Texans. Indianapolis would also earn a wild card if they beat Tennessee and Baltimore loses.

The Giants (5-10) lost their second straight — on a day they committed too many late miscues.

After driving to the Colts' 7-yard line early in the fourth quarter, New York wound up settling for a 27-yard field goal that kept it a one-possession game at 27-21.

New York's last gasp ended when Eli Manning was picked off on a deep ball over the middle.

Luck was 31 of 47 for 357 yards, two touchdowns and one interception. Rogers had seven receptions for 54 yards and T.Y. Hilton caught seven passes for 138 yards.

Manning finished 25 of 53 for 309 yards and one touchdown. Saquon Barkley rushed 21 times for 43 yards and a TD while catching five passes for 34 yards. Sterling Shepard had six receptions for 113 yards.

For most of the day, it sure didn't look like things would end well for Indy.

After forcing three-and-outs on each of Indy's first two possessions, a first for the Giants this season, Barkley scored on a 1-yard run and Scott Simonson caught a 3-yard TD pass from Manning to give New York a 14-0 lead. Curtis Riley then picked off Luck in the end zone to snuff out Indy's first scoring chance.

The Colts finally answered with Nyheim Hines' 1-yard TD run to make it 14-7. The Giants closed out the half with a 40-yard field goal from Aldrick Rosas for a 17-7 lead.

Luck changed everything in the second half.

His 55-yard pass to T.Y. Hilton set up a 2-yard TD pass to Dontrelle Inman. After Manning scored on a 1-yard run with 3:42 left in the third quarter, Luck answered with a 74-yard drive that ended with Marlon Mack scoring on a 3-yard run to get the Colts within 24-21.

Colts: Put their playoff hopes on the line next Sunday at Tennessee.