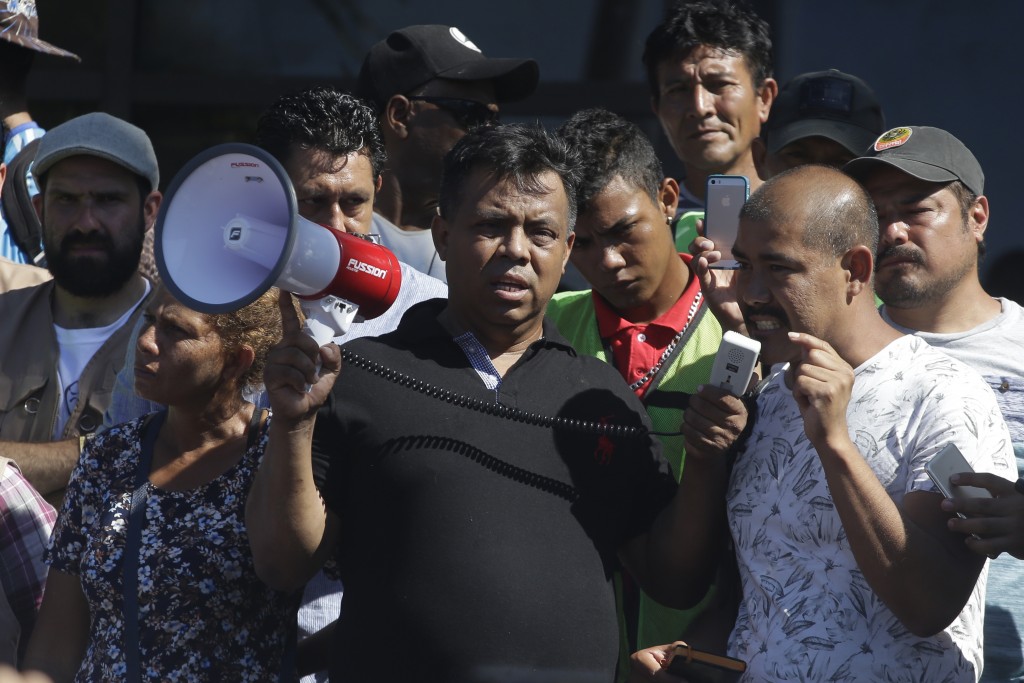 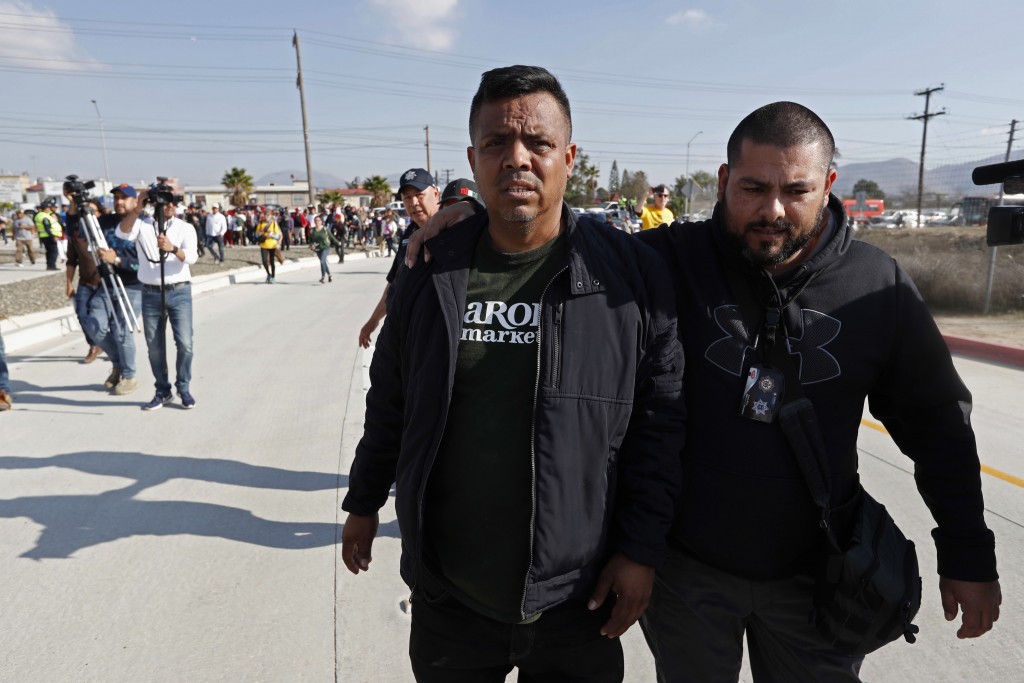 TIJUANA, Mexico (AP) — Two weeks into their journey on a blistering hot October day some 2,400 miles from the U.S. border in San Diego, Mexico invited Central American migrants to remain in Southern Mexico and work — marking a pivotal moment for the largest caravan of asylum seekers ever headed to the U.S.

Irineo Mujica of Pueblo Sin Fronteras told several thousand migrants camped in the central plaza of Arriaga after walking and hitchhiking 60 miles that day that then-President Enrique Pena Nieto was about to leave office, and that Mexico in the past rejected eight of 10 applicants for asylum. He briefly mentioned the U.S. would also try to block their efforts but that the decision was up to the migrants.

"We agree that the refugee system is broken? That this is more of the same," Mujica said of Mexico's offer.

Applause erupted and the crowd chanted, "Let's keep going!" ''We can do it!"

Rejecting Mexico's offer was a vote of confidence in Pueblo Sin Fronteras, or People Without Borders, that has escorted large groups of Central Americans to the U.S. border in San Diego, where many claim asylum or other form of protection. It would be the fourth time in two years that the group accompanied a caravan to the same destination, Tijuana, a traditional spot for migrants with a network of shelters and nonprofits to help.

For the migrants, there is safety in numbers when traveling through crime-ridden Mexico. Such journeys would be near-impossible without the help of Pueblo Sin Fronteras, a collective of about 40 U.S. and Mexican activists that is most closely associated with the U.S.-bound caravan phenomenon. Mujica, a dual U.S.-Mexican citizen who grew up in Arizona, is one of their leading voices.

Pueblo Sin Fronteras activists maintain they simply accompany what they call an "exodus" from Central America and want to ensure migrant rights are respected. But they have drawn increasing criticism, even from one-time allies, who say they play a much larger role than they claim, downplay the dangers of such treks, especially for families and small children, and encourage illegal immigration.

The most recent caravan brought more than 6,000 people to Tijuana, Mexico, last month, where they lived in a squalid, city-funded shelter for two weeks and got a chilly reception from the mayor and some residents. Some may wait months to seek asylum in the U.S. because officials are processing only 60 to 100 claims at San Diego's main border crossing, and the waiting list stood at around 3,000 before the caravan even arrived.

Mujica helped organize a march on Nov. 25 that turned violent, with demonstrators hurling rocks at U.S. Border Patrol agents and tearing down a panel of border fencing to get through. U.S. authorities closed the nation's busiest border crossing for five hours on the Sunday of a Thanksgiving Day weekend and fired tear gas into Mexico, dispersing crowds that sent people, including children, running and screaming.

Esmeralda Siu, who leads a loose-knit group of shelters in Tijuana, said Pueblo Sin Fronteras found a receptive audience with migrants who had never tried to go to the U.S. and who know nothing about the law.

"(The migrants) come in desperation and so they hear what they want to hear," said Siu, coordinator of the Defense of the Migrant Coalition. "Everyone has their own way of doing things, so I don't want to cast judgment, but it seems like they are putting the migrants at great risk."

Linda Romero, coordinator of the Juventud 2000 shelter in Tijuana, said Pueblo Sin Fronteras gives migrants "false illusions" about their quest to get legal status in the United States. She said organizers may be well-intentioned but that the large caravans jeopardize the safety of young children.

Alejandro Solalinde - a highly respected Mexican priest recognized for his work with Central American migrants - alleges the group impeded him from warning caravan members that it's not the time to go to the U.S. border and turned a blind eye to migrant smugglers among the caravans.

"Pueblo Sin Fronteras has no scruples," he told the Mexican newspaper SinEmbargo.

Only about 10 percent of asylum seekers from Guatemala, El Salvador and Honduras are ultimately successful and they may be detained in the U.S., though many are released while their cases wind through immigration court, which can take several years. Pueblo Sin Fronteras deflects criticism that it failed to tell migrants about the long odds, noting that volunteer U.S. attorneys accompanied the caravan along the route to dispense information.

The group says the caravan has no leaders, but many migrants deferred to what Mujica and other members proposed at nightly assemblies along the route. The group's leaders interacted with Mexican officials on migrants' behalf, requested buses to take them to Mexico City and asked human rights officials to protect them. They also gave megaphones to a few migrants who kept bad behavior in check.

Pueblo Sin Fronteras raised $46,000 in donations for the latest caravan, which channels the donations through Oakland, California-based Freedom for Immigrants, a tax-exempt organization that advocates for abolishing immigration detention centers, said Roberto Corona. Corona founded the group in 2009 at Southern Methodist University where he helped day laborers in the Dallas-Fort Worth area. The group runs two migrant shelters in the violent Mexican border state of Sonora, across from Arizona, which Mujica helped open in 2015 and 2016 with funds from friends, churches and organizations

Pueblo Sin Fronteras members supported Solalinde and his annual "Via Crucis" or "Way of the Cross" caravans during the Easter season when migrants did a short march in Mexico to highlight their plight.

But the group decided to accompany migrant caravans to the US border in 2017 after President Donald Trump temporarily halted refugee admissions and Mexico cracked down on immigration. Only a few hundred joined the caravans that drew little attention until last March when one attracted more than 1,000 people as Trump called them a national security threat and ordered National Guard troops to the border.

Pueblos Sin Fronteras did not plan on more caravans but then a group of thousands left Honduras in October, Corona said. Honduran activist Bartolo Fuentes, who had traveled with a previous caravan, told reporters he spread the word on social media but did not organize it.

The caravan forced its way into Mexico as Trump warned of ending aid to Central America if the "lawlessness" wasn't stopped. Mujica, joined by other Pueblo Sin Fronteras members, was detained by Mexican authorities in a march near the Guatemalan border. Mexican officials say he attacked them when they asked for identification, which he denies. He was later released.

Sergio Tamai, a founder of Angels Sin Fronteras that operates shelters for migrants in Tijuana and Mexicali, said he worked with Mujica on previous caravans.

But when caravan members clashed with Mexican police at the Guatemalan border, Tamai called Mujica to say he wanted nothing to do with them. Mujica accused him of being a sellout to the Mexican government, Tamai said.

Tamai said he called Mujica again last month when the caravan reached Tijuana to express his concerns about plans to march to the U.S. border on Nov. 25.

"It was the worst time to do it," Tamai said. "That's when we practically ended our relationship. And we all saw what happened — a disaster."

Migrants carrying megaphones walked through the squalid city-run shelter, pressuring others to join. They pressed the message that their numbers were their power. One mocked those still in their tents suggesting they must like to eat dirt.

Mujica, who had warned the migrants to keep it peaceful and avoid closing the San Diego crossing, walked with migrants as federal police tried to block them. A short time later, demonstrators rushed the border.

Four days later, Mujica accompanied migrants to present their demands to Mexican immigration officials but they were stopped by a federal police officer.

"What an embarrassment," Mujica told the officer. "You have your duties to fulfill but don't disguise what this is. You know that they do not represent any threat against the federal police or the state."

Corona, who now lives in San Diego, said the idea was never to bring everyone to the border. US pro-bono attorneys explained the US asylum process and told the migrants they could be held in detention centers for months and possibly separated from their children, Corona said.

But in the end, the migrants decide.

"They know the wall is very big, and they will not be very welcome in the U.S. by many people, but still they have hope of coming here, that at least their rights will be more protected and they will be able to make a living," he said.

Migrants say they are grateful for all Pueblo Sin Fronteras has done, but they were not prepared for the long wait in Tijuana, where residents have protested their presence.

"We feel let down now that we're here," said Adelaida Gonzalez, 37, of Guatemala City who joined the caravan with her 15-year-old son and neighbor, and now wants the offer to work in Chiapas after seeing the border wall topped with razor wire and the long list of asylum seekers. "We were never told along the way that it would be this hard."

"I do not see us accompanying another caravan. I don't see that fixing the problem," he said. "If we really want to go forward, we need to find out how can we reach the hearts and minds of the American people and Mexican people and mostly the policy makers who can come up with a permanent solution."