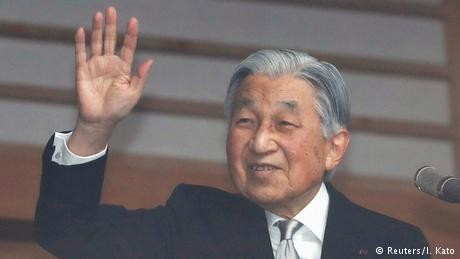 Japan's Emperor Akihito told his compatriots in a recorded address on Sunday he was relieved that his country had avoided military conflict during his 29-year reign.

"It gives me deep comfort that the current era is coming to an end, free of war in Japan," Akihito said, in a rare speech at Tokyo's Imperial Palace to mark his 85th birthday, six months ahead of his abdication.

He added that it was vital that younger generations were educated, so they didn't "forget that countless lives were lost in World War II and that the peace and prosperity of postwar Japan was built upon the numerous sacrifices and tireless efforts made by the Japanese people."

Akihito's voice trembled as he discussed the legacy of World War II, fought under the name of his father Hirohito, who was revered as a god in his early reign, and who died in 1989.

Akihito was the first emperor to take the throne under Japan's postwar pacifist constitution, in a largely ceremonial role. Along with Empress Michiko, he has made it his career mission to urge peace and make amends for Japan's aggressive expansionist policies of the last century.

Akihito has made visits to the Philippines and other Pacific islands conquered and devastated by Japan during the war, and although he has avoided a direct apology, he has subtly stepped up his expressions of regret in recent years in carefully scripted statements.

His conciliatory stance contrasts with Japanese political leaders, including current Prime Minister Shinzo Abe, who is often criticized for attempting to gloss over the country's wartime record.

During Sunday's speech, Akihito also paid tribute to the Japanese people for their support during his reign.

"As I come to the end of my journey as emperor, I would like to thank from the bottom of my heart the many people who accepted and continued to support me as the symbol of the state," he said.

The imperial household said a crowd of more than 75,000 turned out to mark the emperor's birthday, the largest attendance during his reign, known as the "Heisei" era, which means "achieving peace" in Japanese.

Akihito is set to abdicate on April 30 and will be be succeeded by his eldest son, Crown Prince Naruhito, on May 1. In doing so, he'll become the first Japanese emperor in more than two centuries to step down.

A row has broken out over whether the undisclosed cost of the lavish enthronement ceremony for Naruhito — which is likely to run to tens of millions of euros — should be borne by Japanese taxpayers.

Although Japan has not fought in conflicts since World War II, its military was involved in reconstruction efforts following the 2002 US-led invasion of Iraq and joined an international effort to tackle piracy off the coast of Somalia.