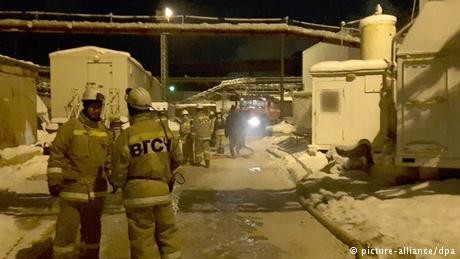 Rescue workers on Sunday retrieved dead bodies of nine workers after a fire broke out at a potash mine in Russia the day before.

The construction workers were trapped underground in the mine after smoke and fire erupted in the mine operated by Uralkali in Solikamsk, some 1,500 kilometers (930 miles) northeast of the capital Moscow.

According to Russia's Interfax news agency, there were 17 workers in the mine at the time of the accident. Eight managed to escape unharmed, it confirmed.

State news agency TASS cited local authorities as saying that the fire broke out as workers were installing a concrete line at a depth of 340 meters.

It is unclear what caused the fire. Investigators denied initial reports that a methane explosion took place in the mine.

Russia's mining industry has been plagued by deadly accidents. In February 2016, 36 miners and rescue workers were killed in a coal mine above the Arctic Circle.