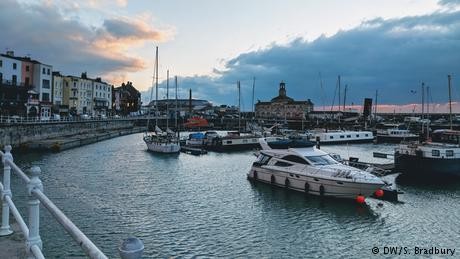 Threatening clouds over Ramsgate harbor gradually give way to a crisp blue sky as the coastal town in eastern Kent comes to life on a chilly winter's morning. Street sellers erect their market stalls and begin their trade of wares from bric-a-brac and shoes, to flowers and fruit. Vintage shops and record stores open their doors alongside pound shops and barbers on the quintessentially British high street that snakes down to the boat-stacked water's edge, with pubs and fish-and-chip shops lining the way.

Two-and-a-half years ago people here voted overwhelmingly in support of Brexit: Thanet constituency, which includes Ramsgate, voted to leave 46,047 to 26,065 — a 64 percent majority based on a 73 percent turnout, one of the highest in the UK.

So how do those in a Brexit-heartland feel about the current political quagmire, with Prime Minister Theresa May struggling to get parliamentary backing for her negotiated deal, not least over the thorny issue of a backstop to prevent a hard border with Ireland, amid increasing calls for a People's Vote?

It doesn't take long to find those who will proudly share they voted for Brexit, or to hit upon some common reasons why, often reminiscent of the mantras of the vociferous Leave campaign of 2016: immigration, jobs and border control.

"We get too many illegal immigrants, they take over everything. Why should they get our housing and services?" retiree Les Shewery asked rhetorically. Frustration with the perceived corruption of the EU institutions and a lack of British political clout to influence EU laws often boils over. "The EU's got 44,000 different legislation over things from straight bananas to stopping us digging out our rivers to prevent floods. It's just crazy. It's corrupt. Unelected people in power telling us what to do," Paul Dolton, a 52-year-old former soldier, told DW.

In a region hit hard by economic downturn over recent decades, austerity measures have tugged at the threads of the social fabric of such communities. The port, formerly Ramsgate's thriving economic center, sees very little trade. Levels of fishing are in decline, jobs are few, low-paid and insecure, and affordable housing is hard to come by. While neighboring seaside towns such as Margate have enjoyed regeneration by attracting a young artistic crowd looking to escape the sky-high rents and squeezed quality of life in London, Ramsgate as had no so such injection of life and spending and the sense of a town being "left behind" is palpable.

However, to suggest all those who voted to leave in such places did so for the same reasons would be to over-simplify the debate.

Chris Bygrave, a 51-year-old railway supervisor, for example, believes the issue of immigration has been vastly exaggerated and was misused as a political tool by campaigners: "I voted leave because the laws implemented by the EU seemed daft and unfair. And the sheer amount it costs the country. But it's nonsense what the idiot brigade and Nigel Farage were saying: 'All the foreigners are taking all the jobs.' It doesn't really wash."

Bygrave, like many others, has "had enough," and now feels utterly disillusioned with the status of the process, even going as far to suggest the country may end up staying in the EU. He thinks that for a community like Ramsgate, Brexit is of little consequence, with social issues and deprivation running much deeper than EU-related issues.

"Look around you, it makes no difference. People with a lot of money, it makes a difference to them. But people on the wrong end of that scale, it ain't going to affect people's lives around here. What, they're going to cut the benefits even more than what they get now? They can't give them any less because they'd starve. They're already going to food banks so they can't threaten them with anything. The jobs don't sustain the houses. You can't earn the money."

Many feel the process for leaving has been grossly mishandled or was flawed from the start, yet the complexity and reports of negative impacts have not deterred voters such as Tracy (who didn't want to give her full name), a 53-year-old market seller. "I'd still say leave, I just wish they'd get on with it. We'll pay a price in the short term, some will suffer more than others, but eventually, it will iron itself out and people will find their way."

'Make the best out of a bad situation'

Thirty-year-old Lucy Monks, a remainer who works in a Ramsgate record store with her father, believes "leaving is kind of going backwards" but recognizes not everyone in the region feels the same. "There are a lot of UKIP-ers around here, we found that out when Nigel Farage came around. They all just came out the woodwork, if you will. As my dad says, there's a generation who are old-fashioned and have their bubble here they live in and don't want that disturbed. I think it's a fear of change really."

Interestingly, those ostensibly divided are now becoming united in their impatience for the process to be completed and for life to continue, as 24-year old Ben Toner suggests. "We should probably go ahead with May's deal now just because I feel like otherwise it would undermine democracy a bit after the vote has been done. Even if I don't agree with the outcome: We've voted, we can't back out of it. You've just got to make the best out of a bad situation."