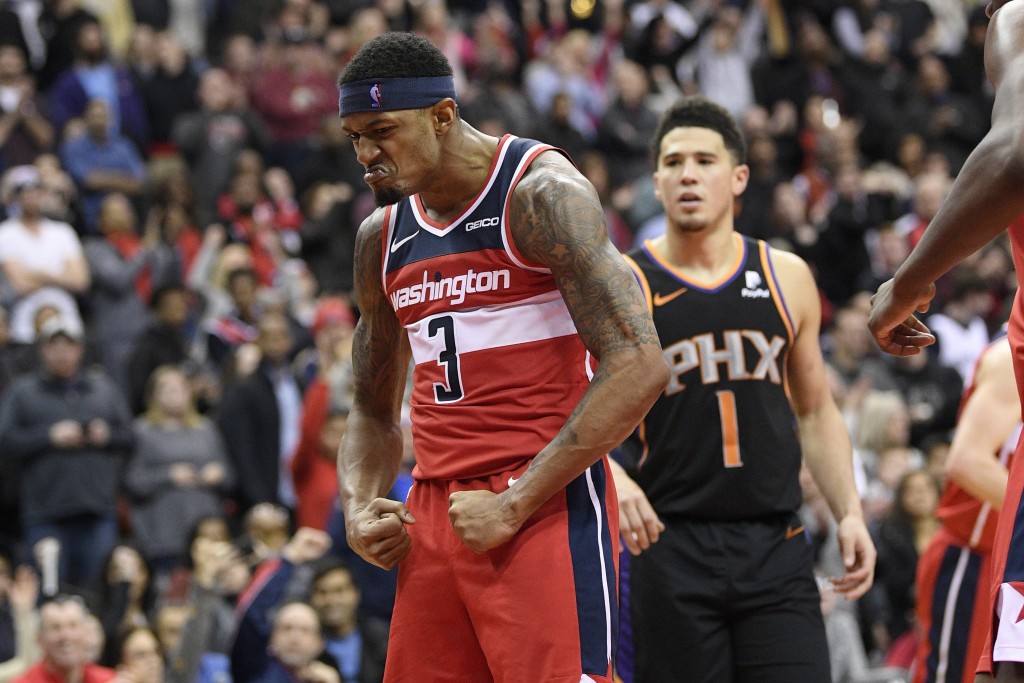 WASHINGTON (AP) — Bradley Beal had 40 points and his first career triple-double to lift the Washington Wizards over the Phoenix Suns 149-146 in triple-overtime Saturday night.

With All-Star point guard John Wall sidelined due to illness, Beal scored 10 points in the third overtime, including a slicing layup that made it 146-144 with 40 seconds to play. He also had a career-high 15 assists and 11 rebounds.

Thomas Bryant added a career-high 31 points, hit all 14 of his shots and made all three of his free throws. At one point, Bryant scored 16 of 18 points for Washington across a stretch of the first and second overtime. He also had 13 rebounds.

Devin Booker had 33 points and 14 assists for the Suns, who ended their four-game winning streak after giving back a seven-point lead late in the fourth quarter. Deandre Ayton had 26 points and 17 rebounds for his fifth consecutive double-double, but fouled out midway through the second overtime.

JJ Redick added 22 points for the 76ers, who pulled within 2½ games of first-place Toronto in the Atlantic Division.

Pascal Siakam scored 26 points and Kyle Lowry added 20 for the Raptors, who slipped to 25-10. Toronto played without two-time defensive player of the year Kawhi Leonard, as well as Serge Ibaka and Jonas Valanciunas.

It was Philadelphia's third victory in the last 23 games against the Raptors.

Nikola Jokic led the Nuggets with 19 points in 20 minutes before being ejected. Jamal Murray added 18 points and Monte Morris 15.

The Clippers outscored the Nuggets in the paint 80-50.

Wade finished with 13 points for Miami, which extended its season-high winning streak to four games. Hassan Whiteside had 11 points and 13 rebounds, and Kelly Olynyk and James Johnson each scored 11 points for the Heat.

Antetokounmpo was held to a season-low nine points — his previous was 12 — on 3 for 12 shooting, though he did have 13 rebounds. Khris Middleton scored 18 points and Eric Bledsoe added 17 for the Bucks, who shot 37 percent — and 9 for 43 from 3-point range. It was the sixth-worst 3-point percentage in NBA history for a team taking at least 40 shots from beyond the arc.

Clint Capela had 21 points and a season-high 23 rebounds, and Eric Gordon had 18 points on 4-of-12 shooting from 3-point range.

The Rockets were playing without point guard Chris Paul, who suffered a Grade-2 left hamstring strain on Thursday night in Miami and is expected to be out at least two-to-four weeks. Houston entered Saturday winless in five games without Paul this season.

OAKLAND, Calif. (AP) — Kevin Durant had 29 points with a key 3-pointer with 15 seconds left, and added 12 rebounds and eight assists, as Golden State held off a fourth-quarter rally.

Stephen Curry contributed 22 points, five rebounds and five assists and Jonas Jerebko provided a nice boost with a season-high 23 points on 10-for-12 shooting with six rebounds in 21 minutes off the bench. The made field goals also were his most this season, and Jerebko received a rousing ovation when he took a seat with 6:39 to play.

Mavericks rookie sensation Luka Doncic made 5 of 11 shots with three 3-pointers in the first half for 14 of his 19 points. DeAndre Jordan matched his season high with 23 rebounds, getting 12 before the break.

Draymond Green had 14 points, 10 rebounds and five assists in Golden State's 12th straight victory against the Mavericks at Oracle Arena.