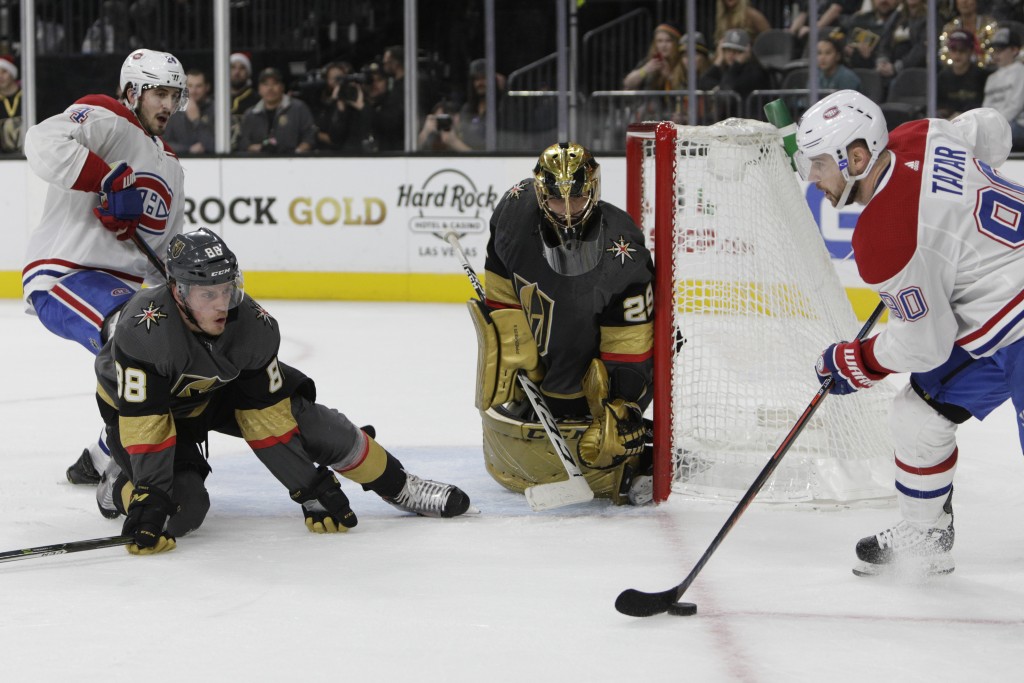 Danault entered the game with two goals this season. His third score of the game came with 1:25 left in the third period, setting up Byron's backhand goal 1:59 into OT.

Carey Price made 23 saves, and the Canadiens swept the season series against Vegas.

Brandon Pirri scored twice and Jonathan Marchessault also scored for Vegas. William Karlsson, who leads Vegas with 29 points, had two assists. Marc-Andre Fleury, one win shy of his 50th as a Golden Knight, made 43 saves.

Pirri has three goals in two games since being recalled from the American Hockey League's Chicago Wolves on Dec. 19.

CALGARY, Alberta (AP) — David Perron had a goal and an assist and Jake Allen made 28 saves to lead St. Louis.

Perron has nine goals and 11 assists in 16 games against Calgary since the start of the 2014-15 season.

Matthew Tkachuk scored his 16th goal for Calgary. The Flames have lost three straight. Calgary lost for the first time in regulation at home since Nov. 15, ending a 7-0-2 string.

SAN JOSE, Calif. (AP) — Ilya Kovalchuk scored in overtime in his return from an ankle injury and lifted Los Angeles.

Kovalchuk also scored in the first period, and Alex Iafallo had a goal and an assist. Kovalchuk had missed 10 games after having an ankle bursectomy.

Kovalchuk hadn't recorded a point in his previous 11 games before the procedure. Jonathan Quick made 29 saves.

Thomas Vanek scored for Detroit and Jimmy Howard had 21 saves.

James van Riemsdyk had a goal and an assist and Sean Couturier and Phil Varone netted goals for Philadelphia, which lost its first game since interim coach Scott Gordon replaced the fired Dave Hakstol and 20-year-old Carter Hart took over the goaltending duties.

Hart allowed four goals on the first 15 shots he faced and finished with 15 saves.

Sergei Bobrovsky made 34 saves for Columbus.

BOSTON (AP) — Patrice Bergeron returned to the lineup after missing 16 games and scored two goals, reaching 300 for his career in leading Boston.

Jaroslav Halak stopped 28 shots in his third start for Boston and assisted on Sean Kuraly's empty-netter.

Ryan Johansen and Kyle Turris scored for Nashville, which lost its fourth straight (0-3-1) for the first time this season. Pekka Rinne made 27 saves.