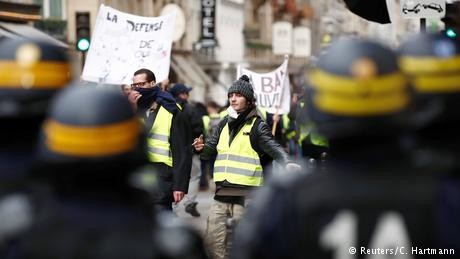 The French 'yellow vest' protest movement was reduced from a roar to a whimper on Saturday, when just a few hundred people rallied in central Paris against President Emmanuel Macron's government.

Despite dozens of arrests, mostly peaceful protests were reported on the streets of the French capital, where life on the Champs-Elysees shopping street — the scene of major violence and vandalism over five previous weekends — returned to normal.

Concerns that protesters would disrupt proceedings outside the Palace of Versailles, on the edge of Paris, came to nothing when only 60 people turned up. Many of the protesters gathered at the foot of the Sacre-Coeur basilica in the picturesque neighborhood of Montmartre near the center of the capital.

Disruption was more noticeable elsewhere in France, where 'yellow vests' blocked the toll booth on the A9 motorway close to the French-Spanish border, near Perpignon. At one point, police used tear gas to disperse protesters and get traffic moving again.

Overnight into Saturday, a motorist was killed after hitting a truck stuck in a traffic jam, also close to Perpignan.

The driver became the tenth person to die during the 'yellow vest' movement, which began on November 17, initially in opposition to a rising fuel tax but later over a skyrocketing cost of living. Most of the victims died in traffic accidents.

Another border highway, that links France and northwest Italy, also saw a blockade by some 200 demonstrators.

Roadblocks were also reported in northern France near the border with Belgium, while about 100 people blocked Strasbourg's Europe Bridge, near the German border, until police arrived.

Across the country, some 200 roundabouts remained occupied by protesters, and further demonstrations were planned for Saturday in Lyon, Toulouse, Orleans and Brittany.

In response to a six-week campaign of public anger, the French parliament, meanwhile, passed €10 billion ($11.3 billion) of emergency measures on Friday to reduce the tax burden and increase purchasing power.

Although the nationwide demonstrations have lost momentum as the weeks have gone on, many observers expect the 'yellow vests' to be out in force once again after the Christmas holidays.