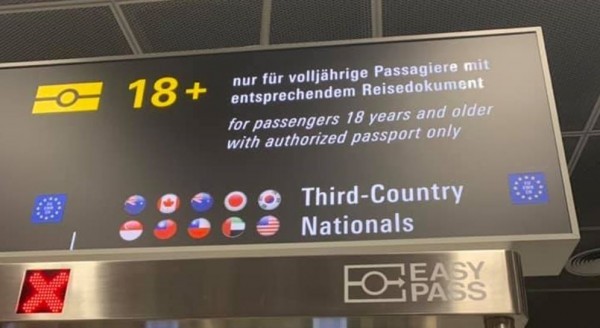 TAIPEI (Taiwan News) -- Taiwanese netizens are thrilled to see the Frankfurt Airport in Germany include Taiwan, along with its official flag, among the 10 non-EU countries eligible for its easy pass system.

After having to deal with China's "Orwellian Nonsense" over the past year or so with every instance of Taiwan on corporate websites being forcibly changed to "Taiwan, China," Taiwanese are relieved to finally see an organization with the backbone to state the reality that Taiwan has its own identity as a country that issues it own passports.

In response to the post, many Taiwanese netizens are gearing up for a trip to Germany over the Lunar New Year holiday to reward the country for its bold stance on Taiwan's sovereignty and the increased ease of travel.

Many netizens then mocked the inevitable backlash from Beijing and its legion of trolls:

"Just wait, there will soon be many broken glass hearts climbing over the wall to curse."

"Soon to be strongly condemned by China's Ministry of Foreign Affairs."

"The communist party will be angry."

"Doing it like this will make certain people collapse."

"Can everyone give applause for Germany's Ministry of Foreign Affairs?"

The special privileges afforded Taiwanese passengers is consistent with Taiwan's ranking as having the 28th most powerful passport in the world. Taiwan listed among countries eligible for easy pass in Germany. (Image from 爆廢公社)