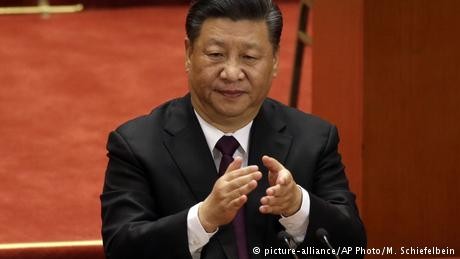 In a highly anticipated speech at the Great Hall of the People on Tuesday, Chinese President Xi Jinping hailed the 40th anniversary of China's "reform and opening up" policy, while also making it clear that Beijing would not diverge from its one-party system.

The 1978 reforms by former Communist leader Deng Xiaoping marked China's move towards economic liberalization and helped transform the country from one of the world's poorest to the world's second-largest economy.

"We have made a historic transition from a closed and semi-closed country to one that embraces overall opening up," Xi said.

He added, however, that "no one is in a position to dictate to the Chinese people what should or should not be done."

Although Xi vowed to implement economic reforms, he did not offer any new specific measures in his speech.

Read more: What will keep China and Russia from building a new world order?

Xi's speech comes as China is in the midst of a trade war with the United States, which is already impacting China's economy and is expected to affect economic growth around the world.

Some Chinese government advisers and entrepreneurs in the country have called for faster economic reforms and loosening up the private sector, which has been stifled by state controls.

In a bid to quell concerns about China's economic influence, he said that Beijing would not develop itself "at the expense of other countries' interests."

Earlier this month, US President Donald Trump and Xi agreed to a 90-day truce in the trade dispute to give both sides time to continue negotiations.

The US has imposed tariffs on $250 billion (€194 billion) worth of Chinese goods, while China responded with duties on $110 billion of US imports. The truce halted a threatened escalation of the tariffs.