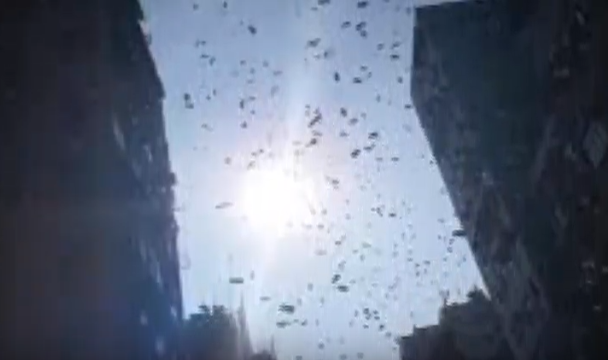 At around 2:40 p.m., police officers in Hong Kong received a report that someone was distributing money to people on the street. There have been multiple videos of HK$100 (US$18) banknotes fluttering from the sky and passersby excitedly grabbing for them.

When Police arrived at the scene, they instructed people not to pick up the money. No arrests were made at the scene, but officers reportedly collected about HK$5,000 (US$640) from the street.

Eyewitnesses at the scene reported that a man dressed in black was tossing the banknotes from the top of a building. Videos show pedestrians climbing on top of a subway exit to snatch up the bills that had fallen from above.

AFP reports that a man named Wong Ching-kit was arrested on Sunday, Dec. 16 for causing public disorder. The event was reportedly live streamed from the Epoch Cryptocurrency page, which is run by Wong.

Wong is the founder of Epoch Cryptocurreny, and is known online by the name of Coin Young Master. In a post made on FB the day of the incident, he reportedly said that he wanted to “help the poor by robbing the rich.”

In the video streamed by Epoch Cryptocurrency, a man in black carrying an archer’s bow across his back, who is presumed to be Wong, can be heard saying in Cantonese, “I hope everyone here will pay attention to this important event. I wonder if any of you believe money could fall from the sky?”​

The money then begins to fall from a nearby building to the astonishment of the crowd.

The Epoch Cryptocurrency video can be viewed here on FB.

A video recorded by a passerby can be seen below.