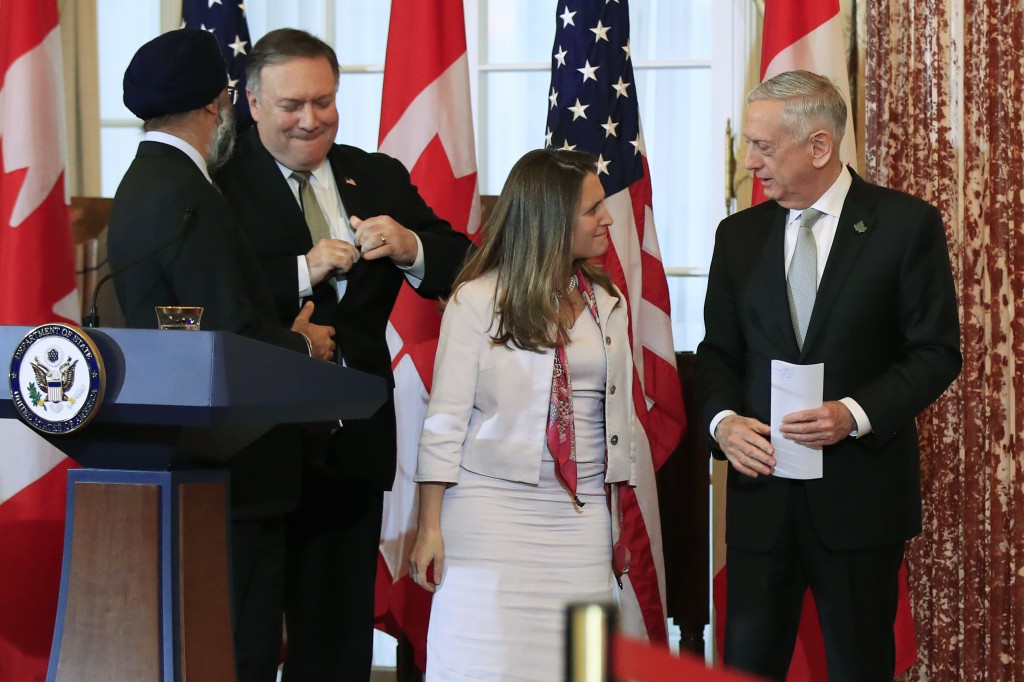 WASHINGTON (AP) — By detaining two Canadians in an apparent act of retaliation, China is looking like the country its harshest critics say it is: one unbound by the laws, rules and procedures that govern other major industrial nations.

Canada's arrest of a top Chinese technology executive at the request of the United States has set off a diplomatic furor with Beijing.

And the way the countries have acted in the controversy draws a clear distinction between their political and legal systems — at a time when the United States, Canada and other advanced economies are rethinking the way they do business with China.

Canada gave Huawei chief financial officer Meng Wanzhou — daughter of the telecom giant's founder — three days of public hearings before releasing her on bail to the cheers of members of Vancouver's large Chinese community who came to court to show their support.

By contrast, the Chinese secretly detained two Canadians on vague suspicions of "engaging in activities that endanger the national security" of China. Beijing didn't allow Canadian officials to see Michael Kovrig, a former diplomat in China, for four days. And it has yet to allow them access to detained entrepreneur Michael Spavor.

On Friday, U.S. Secretary of State Mike Pompeo spoke out against the arrests and called on China to release them. "The unlawful detention of two Canadian citizens is unacceptable. They ought to be returned," Pompeo said after meeting with his Canadian counterpart.

"What does this say to Canadians?" David Mulroney, Canada's former ambassador to China, said of China's move. "It says to Canadians that China isn't a country that respects the rule of law. This means that when we engage China, we do it carefully and probably in a limited way."

"They are trying to teach us a lesson, and I don't think we should put up with it," agreed Robert Bothwell, a University of Toronto historian. "Sadly, we have to diminish contact with China."

Bothwell concedes that disengaging with China "obviously has economic implications." Like consumers in the United States and elsewhere, Canadians have come to rely on cheap imports from China — everything from sneakers to electronics.

The Huawei clash comes at a tense time. The United States has slapped tariffs on $250 billion worth of Chinese exports to punish Beijing for its sharp-elbowed drive to challenge American technological dominance.

The U.S. says China uses predatory tactics, including outright cybertheft and coercing U.S. and other foreign countries into handing over their technology as the price of admission to the Chinese market. China has lashed back with retaliatory tariffs on $110 billion in U.S. goods.

Over dinner in Buenos Aires, Argentina, Presidents Donald Trump and Xi Jinping agreed to a 90-day cease-fire in the trade dispute, buying time to resolve their differences.

In a sign of progress, China on Friday announced a 90-day suspension of planned tariff hikes on U.S. cars, trucks and auto parts. And China has resumed buying American soybeans, which had plunged as trade tensions worsened.

The Dec. 1 Trump-Xi meeting came on the same day Canadian officials, acting at the request of the U.S., detained Meng during a layover at the Vancouver airport. Washington wants her extradited to the U.S. to face bank fraud charges. The U.S. accuses Huawei of using a Hong Kong shell company to deceive banks and do business with Iran in violation of U.S. sanctions.

On Monday, China took the two Canadians into custody.

"They're innocent. She's probably guilty of fraud. So in that sense, China has arrested innocent people, or relatively innocent people, as a way to pressure Canada to let someone who may be guilty of a crime go free," said David Zweig, a Canadian political scientist at the Hong Kong University of Science and Technology and director of its Center on China's Transnational Relations.

But, Zweig noted, "the Americans moved first" in issuing the warrant for Meng's arrest and therefore must share blame for the fallout.

And Trump may have surrendered the moral high ground by saying he would consider intervening in Meng's case if it would help clinch a good trade deal with Beijing. His comments in an interview with Reuters suggested that he might view Meng as a political pawn.

"What you can't do is make our rule of law negotiable with China," said Derek Scissors, a China specialist at the conservative American Enterprise Institute.

The backdrop to the controversy is a growing disillusionment in Washington with U.S.-Chinese relations. When China entered the World Trade Organization in 2001, many American policymakers expected it to open its markets and perhaps its political system as its economy and its global integration expanded. That hasn't happened.

The Chinese government continues to restrict foreign investment and imports and to closely oversee commerce in the world's second-biggest economy. And under President Xi, the Communist Party has tightened its grip on politics.

The detention of the Canadians "telegraphs once again China's refusal to follow the rule of law and reform its system," said Michael Wessel, a member of the U.S.-China Economic and Security Review Commission, a congressional watchdog on China policy.

"We have to come to grips with the fact that China is a nonmarket economy ruled by a party and president who have solidified if not expanded their grip on power. ... We have to stop thinking that China wants to be more like us."

The Chinese response to Meng's arrest is also having practical repercussions.

"These arrests, if they do have an impact, I imagine it would be a negative one, undermining that campaign to try to win over other developed economies," he said.

"It feeds into the notion that China's arrests are not based on the rule of law but on other factors," said Amanda DeBusk, chair of trade practice at the Dechert law firm and a former U.S. Commerce Department official. "Some of our clients have cancelled trips to China. Business executives are reluctant to go China right now because there is uncertainty as to who will be targeted. ... The arrests are a new escalation in the trade war with China."

They could backfire on Beijing, she said, by discouraging trade and foreign investment in China.

In Hong Kong, professor Zweig, a friend of detainee Kovrig, said: "My 96-year-old mother phoned and told me, 'Don't go to China! You're going to be arrested!' "

Gillies reported from Toronto and McDonald from Beijing.