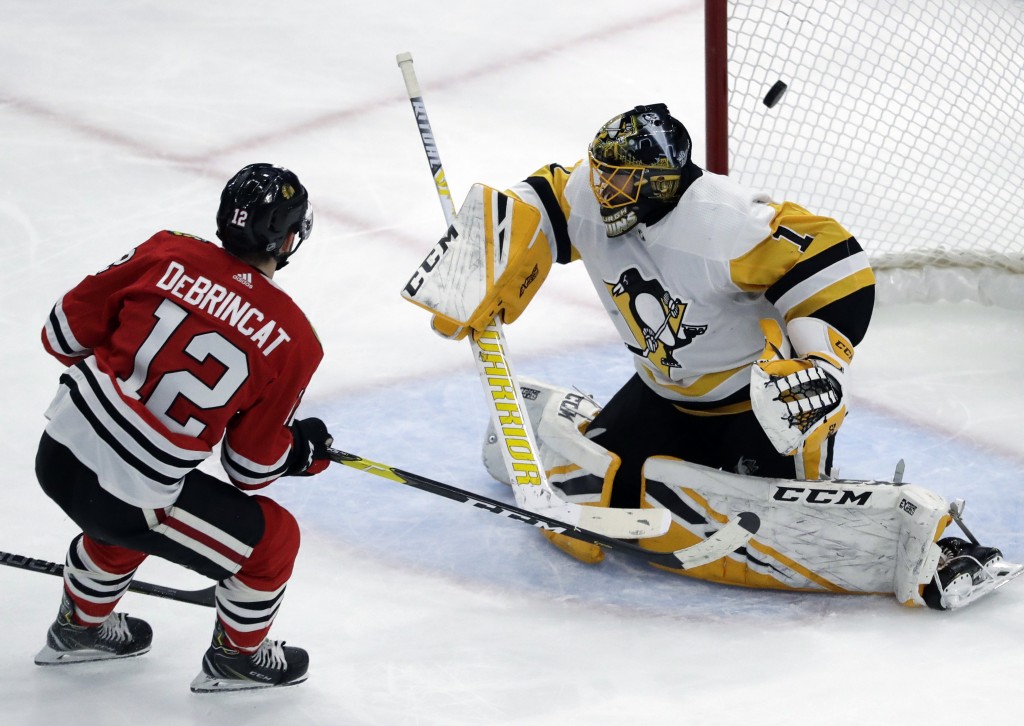 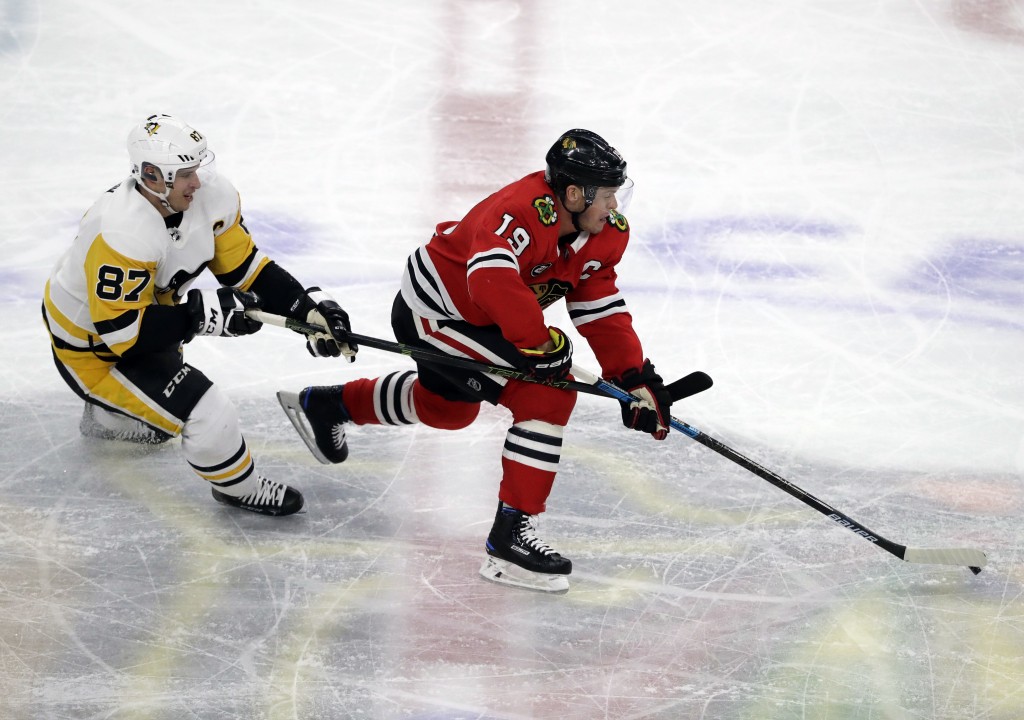 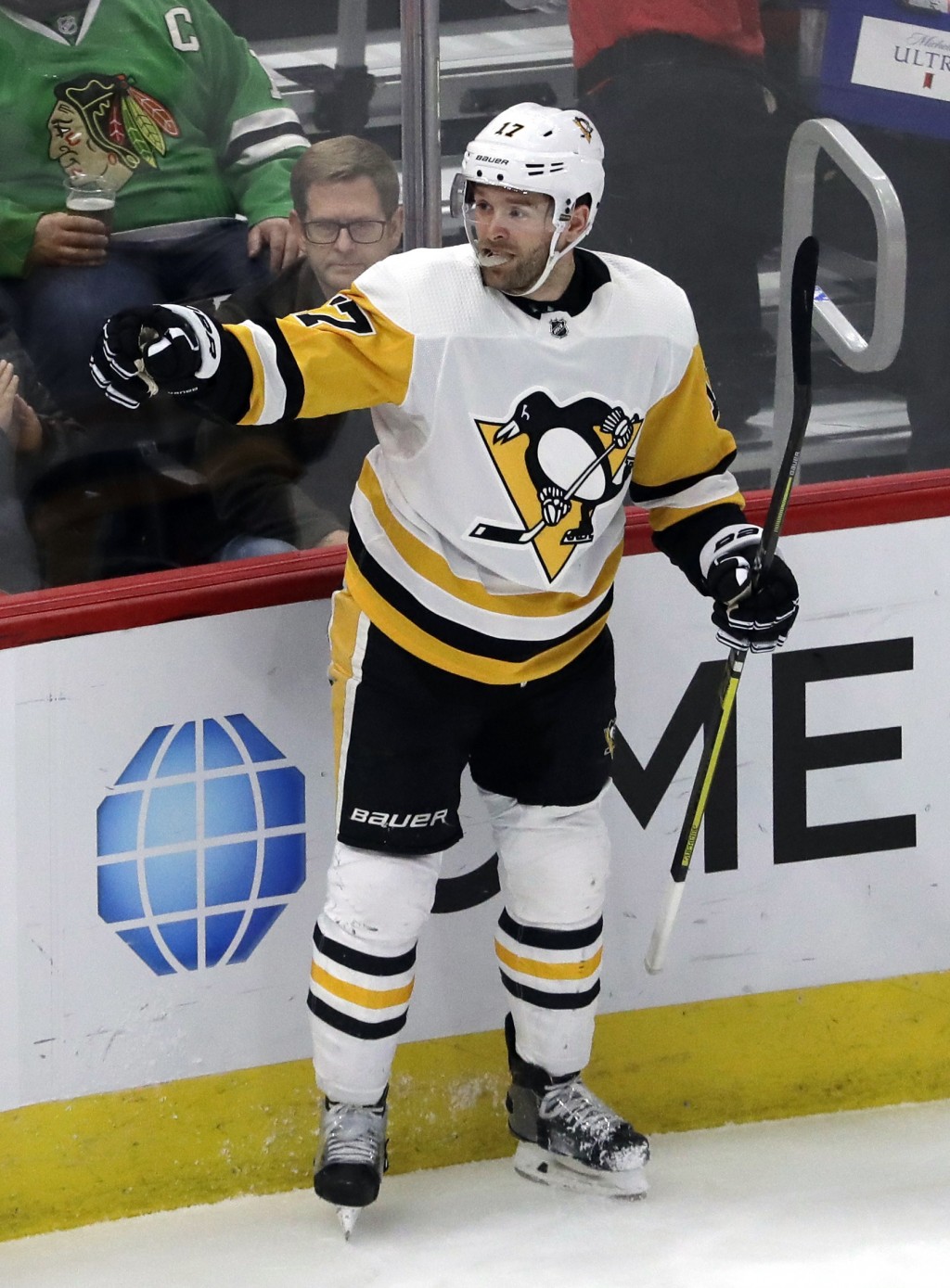 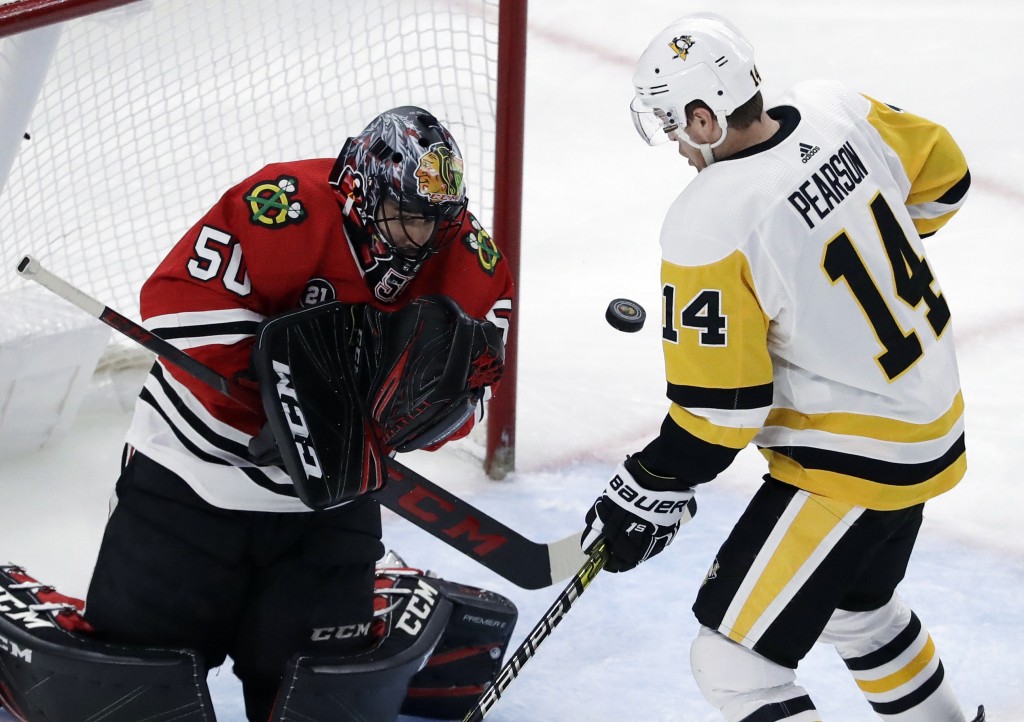 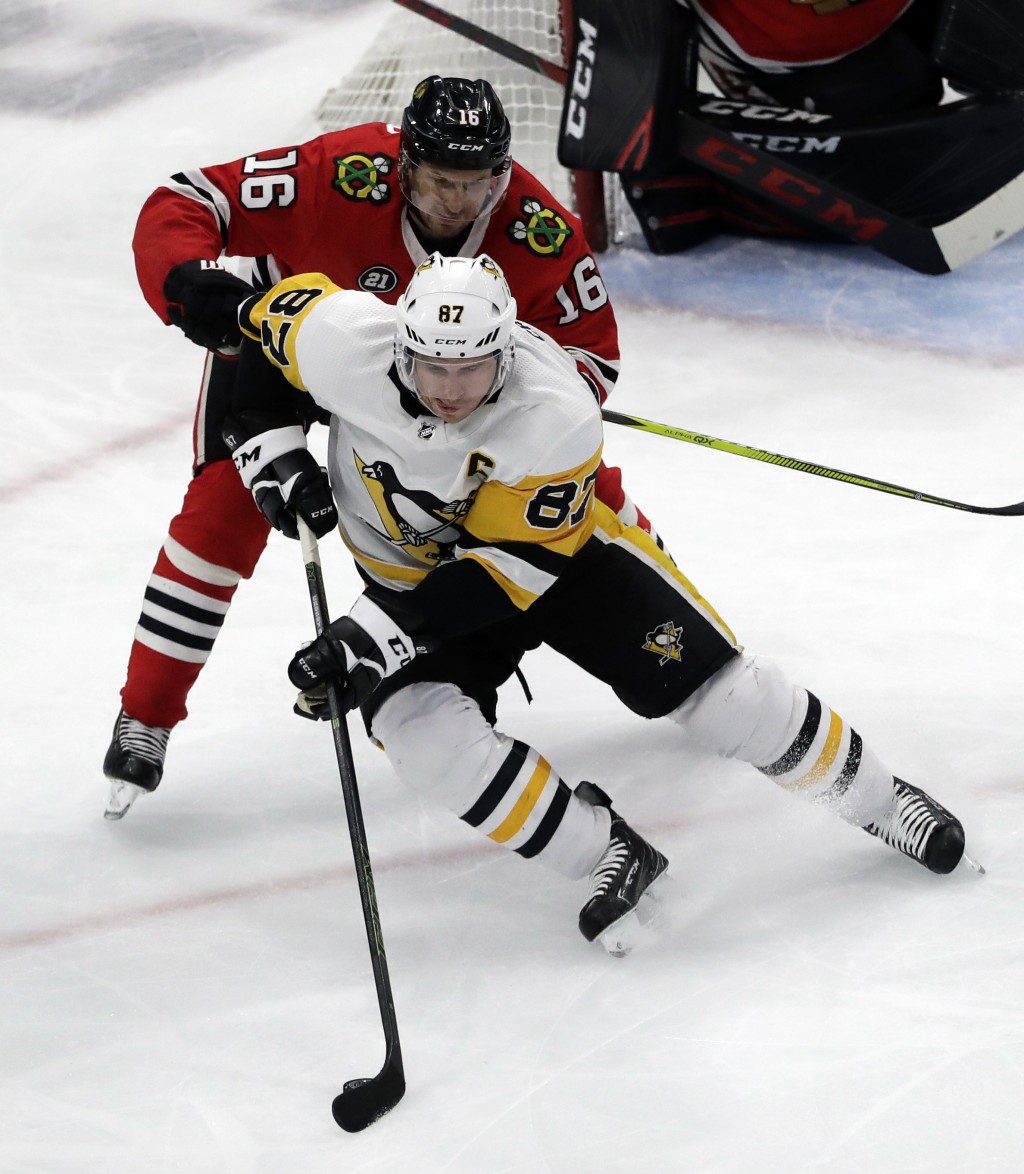 CHICAGO (AP) — Jonathan Toews had a goal and two assists, and the Chicago Blackhawks snapped an eight-game losing streak by topping the Pittsburgh Penguins 6-3 on Wednesday night.

Marcus Kruger, Brent Seabrook, Andreas Martinsen, Brandon Saad each had a goal and an assist for Chicago, which rebounded after blowing 2-0 and 3-2 leads to win for just the second time in 12 contests. Alex DeBrincat scored a power-play goal.

Toews became the 16th active player to reach 700 career points with the same franchise. He assisted on Saad's empty-netter for his 701st point.

Kruger snapped a 3-all tie when he beat Casey DeSmith from the front of the crease 3:49 into the third period. Martinsen set up Kruger's fourth goal of the season with a centering pass from below the goal line.

Toews also had an empty-netter before Saad made it 6-3 with his ninth goal at 19:39.

Bryan Rust scored three times for Pittsburgh in his second career hat trick. The 26-year-old forward, who entered with one goal in 29 games this season, missed on several other prime chances.

Corey Crawford made 40 saves for Chicago. DeSmith blocked 23 shots in his sixth straight start and 10th in the last 12 games.

Matt Murray, who started the season as Pittsburgh's No. 1 goalie, was activated from injured reserve and served as DeSmith's backup. Murray missed 11 games with a lower-body injury.

The Blackhawks shook up their roster on Wednesday morning by recalling forward Dylan Sikura and defenseman Carl Dahlstrom from Rockford of the AHL and sending forward Alexandre Fortin to the minors. Sikura and Dahlstrom played.

Chicago is 4-12-2 under coach Jeremy Colliton, who replaced Joel Quenneville on Nov. 6.

The Blackhawks opened the scoring for the first time since Nov. 18 and led 2-1 after one period. Opponents had scored first in Chicago's last 11 games, outscoring the Blackhawks 25-5 in the first period during that span.

Martinsen skated across the crease and was credited with his first goal of the season on a deflection of Dahlstrom's shot at 14:14. The goal capped a flurry around the Pittsburgh net after Kruger fired a shot off the crossbar and DeSmith lost his stick.

Seabrook put Chicago ahead 2-0 3:37 later when he fired a shot from the right point over DeSmith's glove.

Rust cut it to 2-1 with 1:20 left in the first when he skated from the left corner and beat Crawford on the glove side.

Rust's second goal, at 5:46 of the second, tied it at 2. After Seabrook's turnover, Crawford made a pad save on Derek Grant's drive from the slot, but Rust buried the rebound.

DeBrincat's power-play goal with 4:32 left in the period regained the lead for Chicago. After taking Patrick Kane's feed, DeBrincat skated around Olli Maatta and beat DeSmith on the stick side with a shot just under the crossbar.

Rust tied it at 3 with 56.8 seconds left when his cross-ice pass from the left side of the net deflected off Seabrook's stick and past Crawford.

NOTES: Rust has 37 goals in 211 career games. He scored three times against Ottawa in December 2016. ... Seabrook played in his 1,037th NHL game to move past Bobby Hull and into second place in games played as a Blackhawk. Stan Mikita leads with 1,396. ... Pittsburgh G Tristan Jarry was returned to Wilkes-Barre/Scranton of the AHL to make room for Murray, who practiced Tuesday and participated in the game-day skate Wednesday. "We thought we'd get him a good solid workout again today and then engage him over the next couple of games here," coach Mike Sullivan said. Murray last played at Ottawa on Nov. 17 when he allowed three goals on 10 shots in the first period, then was relieved by DeSmith in a 6-4 loss. ... Pittsburgh F Matt Cullen returned after missing 11 games with a lower-body injury. ... Chicago C Artem Anisimov was placed on injured reserve (concussion protocol) retroactive to Dec. 9, when he left a 3-2 loss to Montreal in the third period. ... Blackhawks D Erik Gustafsson (illness) missed his second game, while Penguins F Patric Hornqvist (upper body) missed his third.