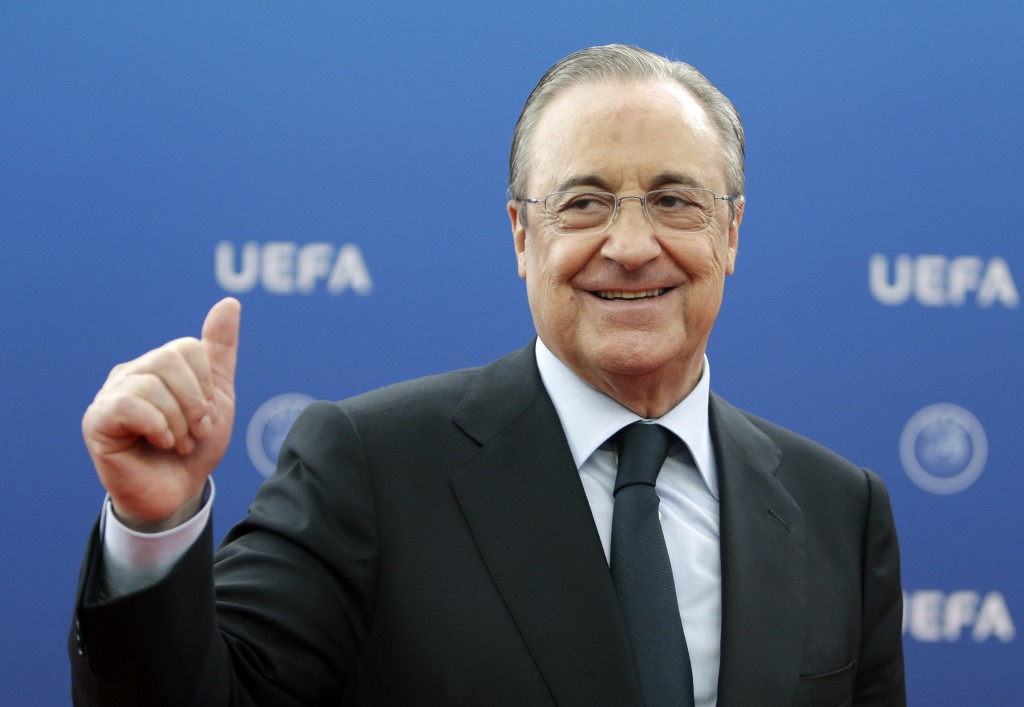 MADRID (AP) — In a speech during Real Madrid's most recent general assembly, club president Florentino Perez spoke proudly about how esports will be part of the club's future.

Perez also talked about plans for a possible Real Madrid theme park to be built in the Spanish capital.

The president took his time to address most of the concerns brought up by club members, but when asked about when Real Madrid was going to create a women's team, Perez didn't answer.

The topic, the club later said, wasn't a priority at that moment.

The question still hasn't been fully answered by Perez or by anybody else. The club that calls itself the best in the world remains far behind other European teams when it comes to women's soccer.

"It's 2018, every modern institution should be thinking about its position on gender issues and gender equality," former FIFA Council member Moya Dodd told The Associated Press. "When such a big team has no accommodation for women players, I think it leaves a big question mark. And in time, history will be the judge of whether maybe they should have acted sooner on this."

Real Madrid is one of the few top clubs still without a women's team in Europe.

In Spain, Atletico Madrid has been the team to beat in recent years, having won the last two women's league titles. Barcelona made it to the quarterfinals of the women's Champions League this season, along with clubs such as Paris Saint-Germain, Bayern Munich and Chelsea. Manchester United recently became the latest English club to add a women's squad, and Roma, AC Milan and Inter Milan did the same in Italy. In Germany, Borussia Dortmund remains without a women's side.

The only team that wears the "all-whites" uniform in Spain's women's first division is the Madrid Club de Futbol Femenino, which has nothing to do with Real Madrid and was created by a businessman disappointed that his daughter couldn't play for the powerful Spanish club.

"The top teams are starting to understand that women's soccer can contribute immensely to the club," said Pedro Malabia, women's soccer director for the Spanish league. "Any modern club which has women's soccer gains a lot in terms of brand, international development and connection with fans. What better way to show that you are a club concerned with women than having a women's division and treating it with respect within a professional structure?"

Real Madrid denied repeated requests for interviews to talk about women's soccer and did not reply to emails requesting comment. The club's press office referred to Perez's comments made in the 2017 general assembly, when he said the club planned to create a women's division but wouldn't do it by signing players and starting a professional team. The initial goal would be to establish a youth system and give opportunities to young players to develop.

Nothing has materialized a year later, with the club saying studies remain underway.

Real Madrid had an opportunity to create a women's team in 2013 when a project was presented to the club by Ana Rossell Granados, a former player who had hoped to play for Madrid.

"Women's soccer is where it is now without Real Madrid, so the club is not essential," said Granados, who operates her team with an annual budget of about 150,000 euros ($170,000). "We shouldn't obligate clubs to have a women's team. Real Madrid will create one when it feels it's the right moment and when it sees that women's soccer is actually a business, not only a social matter. We have shown that women's soccer can be profitable."

There have been rumors that Real Madrid, which reported an operating revenue of 750.9 million euros ($855 million) for 2017-18, could eventually take over a team like Tacon or Madrid Club, buying their licenses and using the structure already in place.

Women's soccer has gained increased attention recently, with players' unions and women's groups pushing for greater equality in the sport. FIFA recently said it was doubling the total prize money for women's World Cup teams to $30 million, and France Football magazine for the first time awarded a Ballon d'Or prize to a woman.

In Spain, government and soccer officials have been attracting more companies to invest in women's events. For the first time, negotiations are underway with Spain's players' association to promote greater equality for men and women in the sport.

Spain's main women's team will be making its second straight World Cup appearance next year in France. It was drawn into a group with Germany, China and South Africa on Saturday.

Barcelona and Atletico added their women's teams in the early 2000s and are currently the only true professional squads in Spain.

Barcelona said its budget for the women's team tripled since it turned professional in 2015.

"We will all benefit if the clubs that are a reference in the men's league start taking women's football into consideration," said Maria Teixidor, the Barcelona director in charge of women's soccer. "If someday a team such as Real Madrid decides to venture into women's football, it will be very welcome."

The consensus is that Real Madrid will eventually join the growing list of clubs with a women's team. What remains to be seen is whether it will be before or after its dreamed theme park is built.