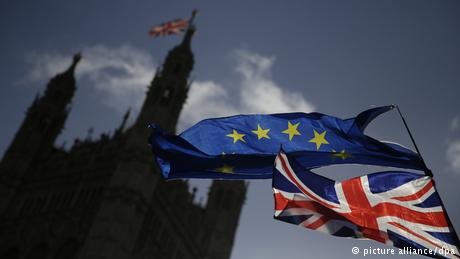 The EU's top court ruled Monday that the United Kingdom could stop its plan to exit the European Union unilaterally without other member states having to approve the decision.

The ruling by the European Court of Justice (ECJ) comes a day before British lawmakers are due to vote on Prime Minister Theresa May's Brexit deal, with MPs expected to reject the proposals.

"The United Kingdom is free to revoke unilaterally the notification of its intention to withdraw from the EU," the ECJ said. It explained that the option of reversing Brexit "exists for as long as a withdrawal agreement concluded between the EU and that member state has not entered into force..." or "for as long as the two-year period from the date of the notification of the intention to withdraw from the EU..."

UK Environment Secretary Michael Gove, who is in favor of Brexit, told BBC radio that "we don't want to stay in the EU."

He added that "this case is very well but it doesn't alter the referendum vote or the clear intention of the government that we leave on March 29."

The British government had twice sought to stop the case being referred to the ECJ, arguing that a Brexit reversal was hypothetical. It had been brought by a group of MPs from various political parties.

Last week, an ECJ advocate general recommended that the UK should have the option of reversing its decision to trigger Article 50 of the Lisbon Treaty in March 2017, which launched the two-year withdrawal process.

Brexit deal could be rejected

May's Conservative party is deeply divided on the deal, which was agreed on after 20 months of talks with the EU. May is facing opposition from Brexiteers, who are pushing for more strident measures as well as Europhiles who demand a second vote on Brexit.

The parliamentary Select Committee on Exiting the European Union on Sunday called May's proposals a "huge step into the unknown" that "fails to offer sufficient clarity or certainty for the future of the UK."

May has repeatedly said that her deal offers the "cleanest break" with Europe. She told Britain's Mail on Sunday newspaper that the UK "would truly be in uncharted waters" if the draft fails to pass the House of Commons less than four months before the March 29 date set for Britain's exit from the EU.

On Sunday, thousands of both pro- and anti-Brexit demonstrators took to the streets of London, with the pro-Brexit group led by members of the far-right UKIP party as well as far-right activist Tommy Robinson. Anti-fascists and Labour party members were among those marching against Brexit.