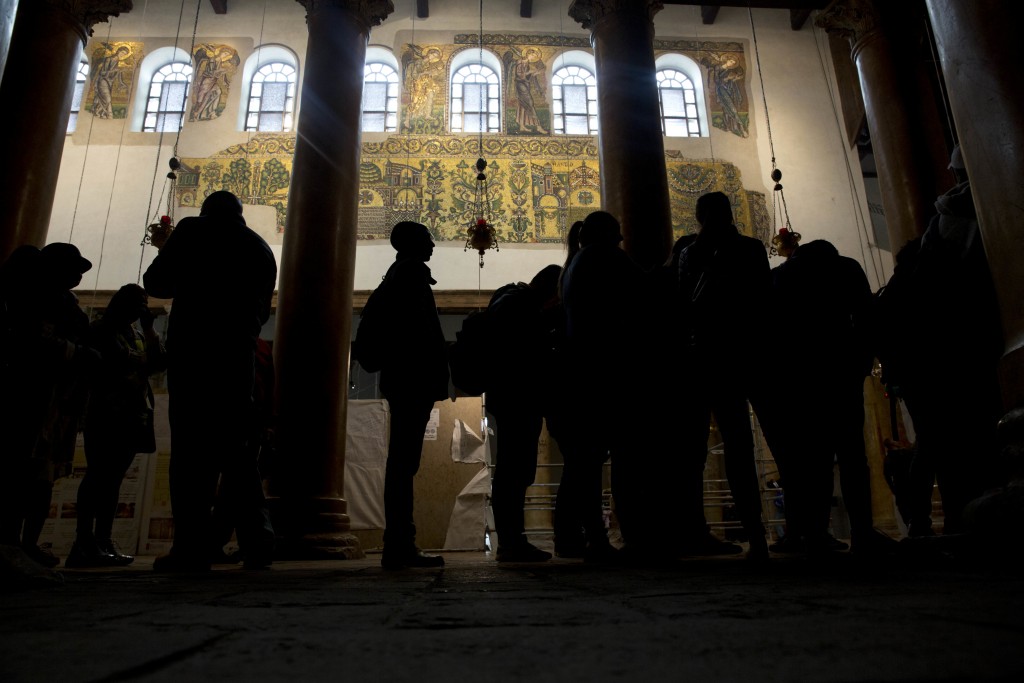 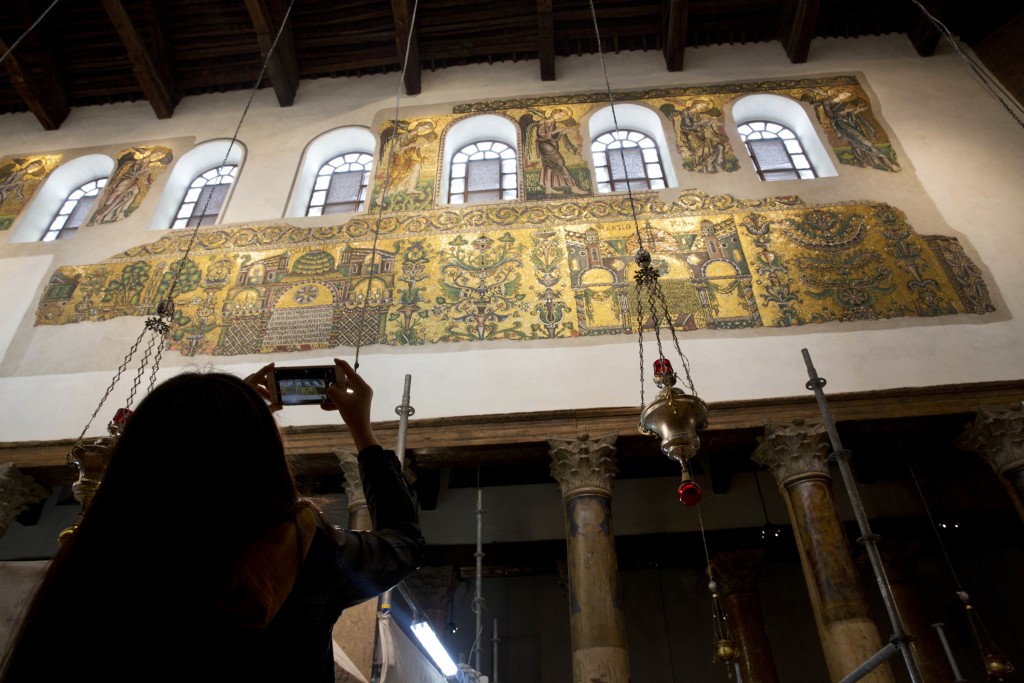 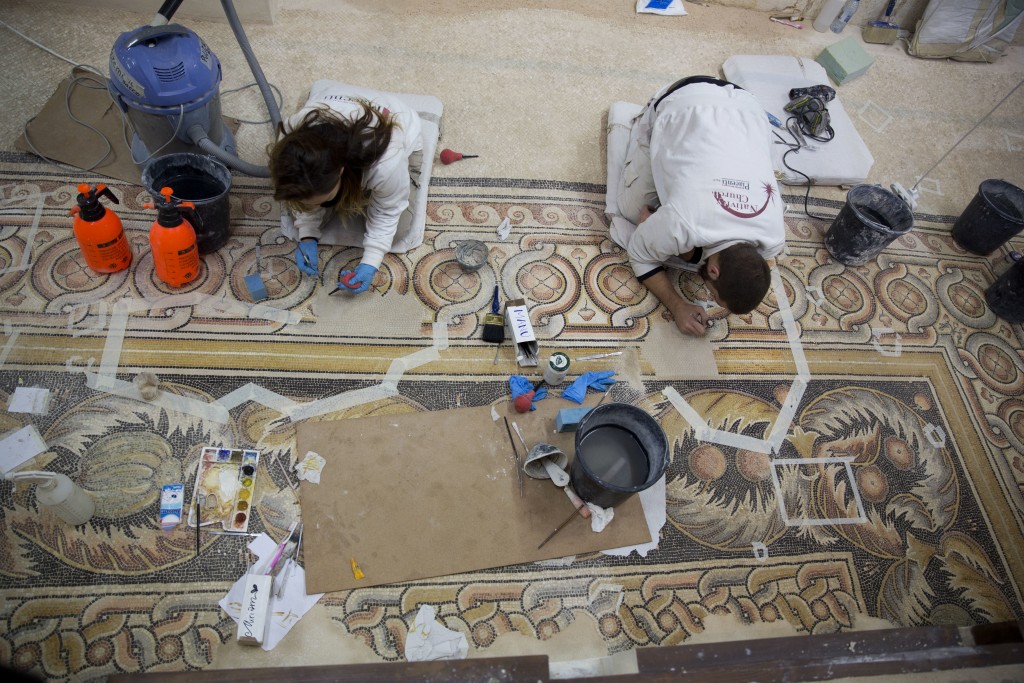 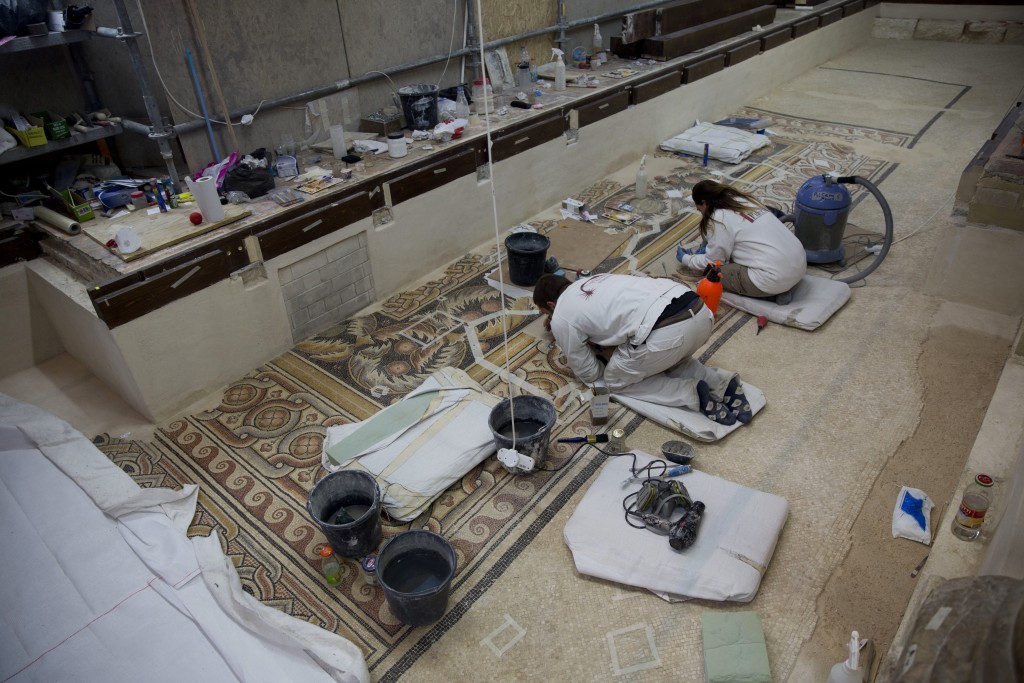 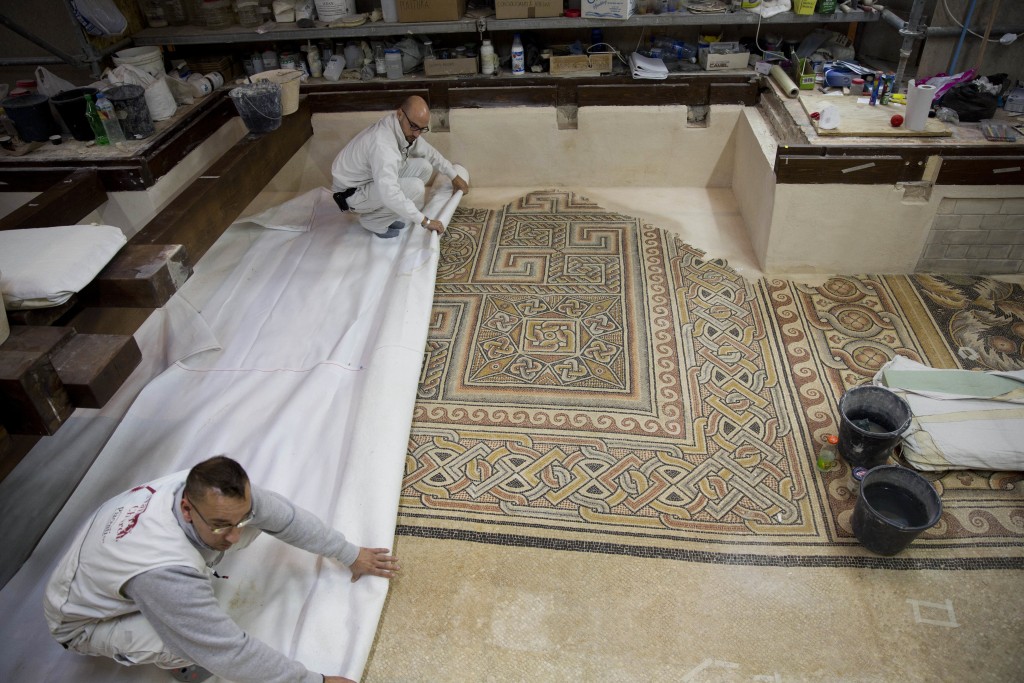 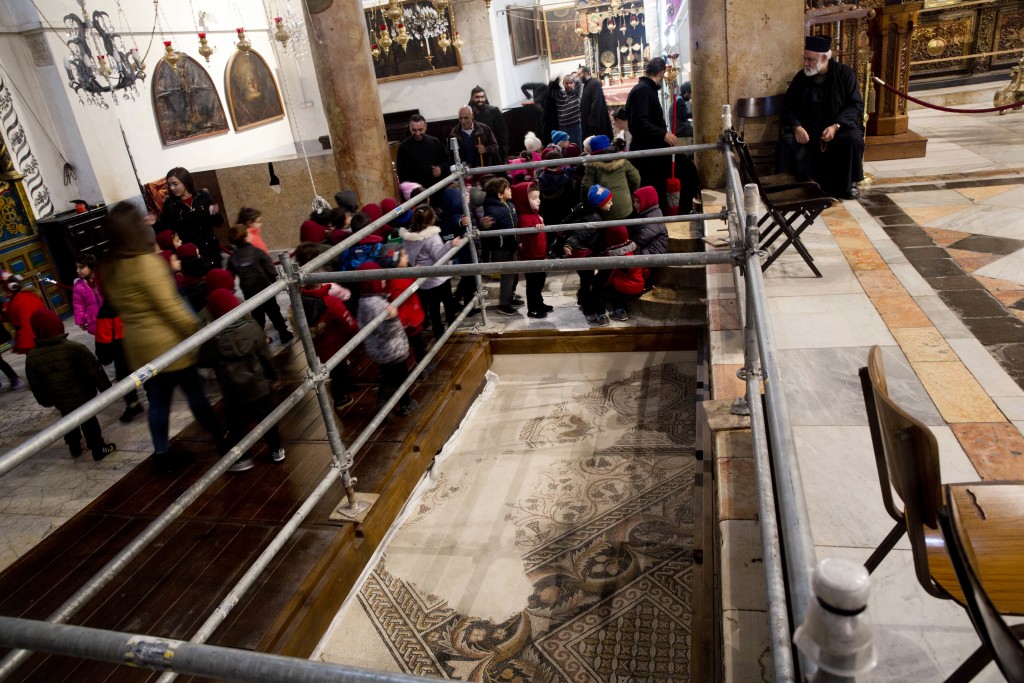 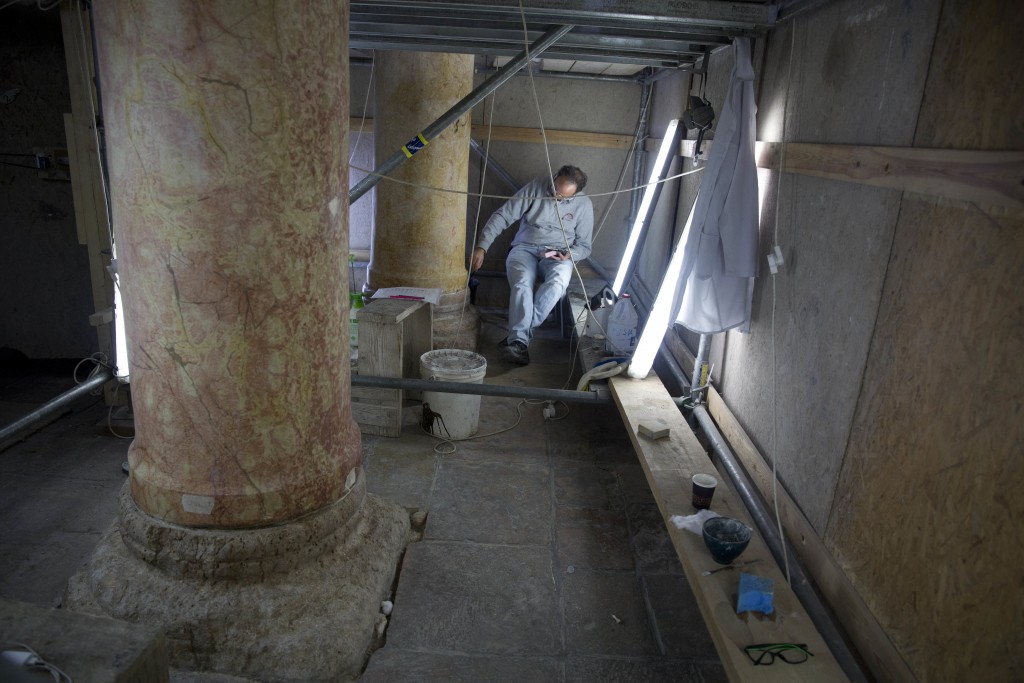 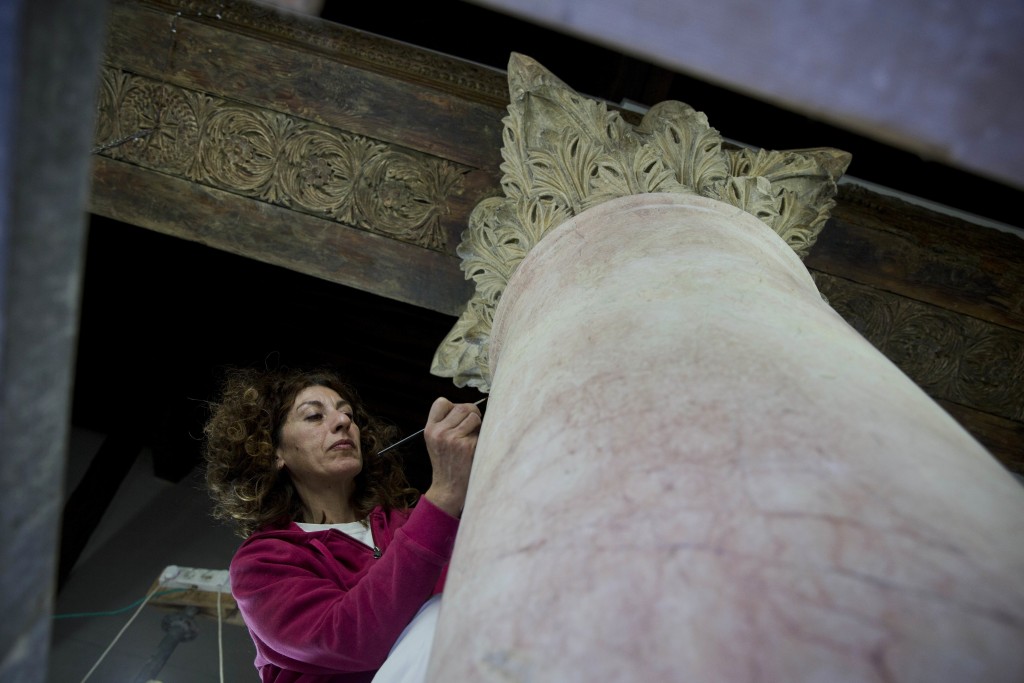 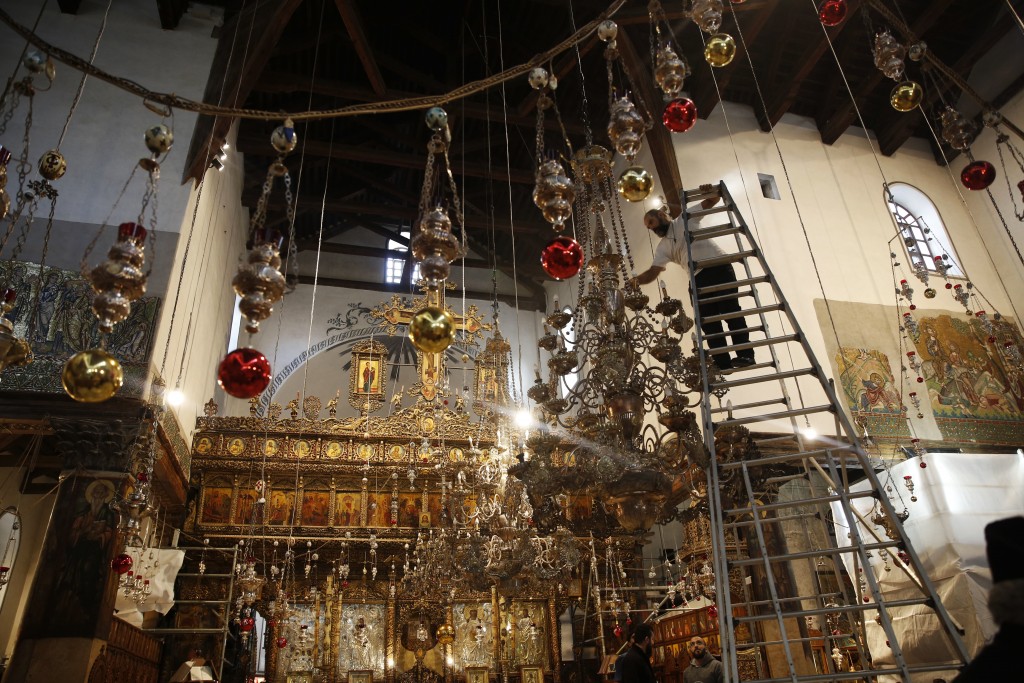 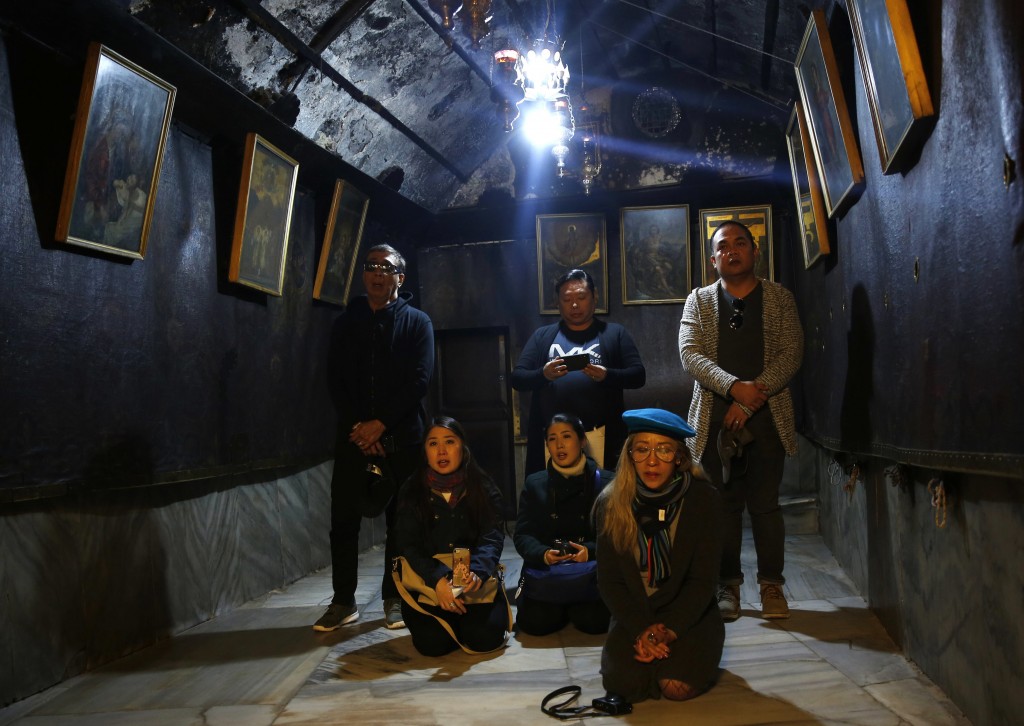 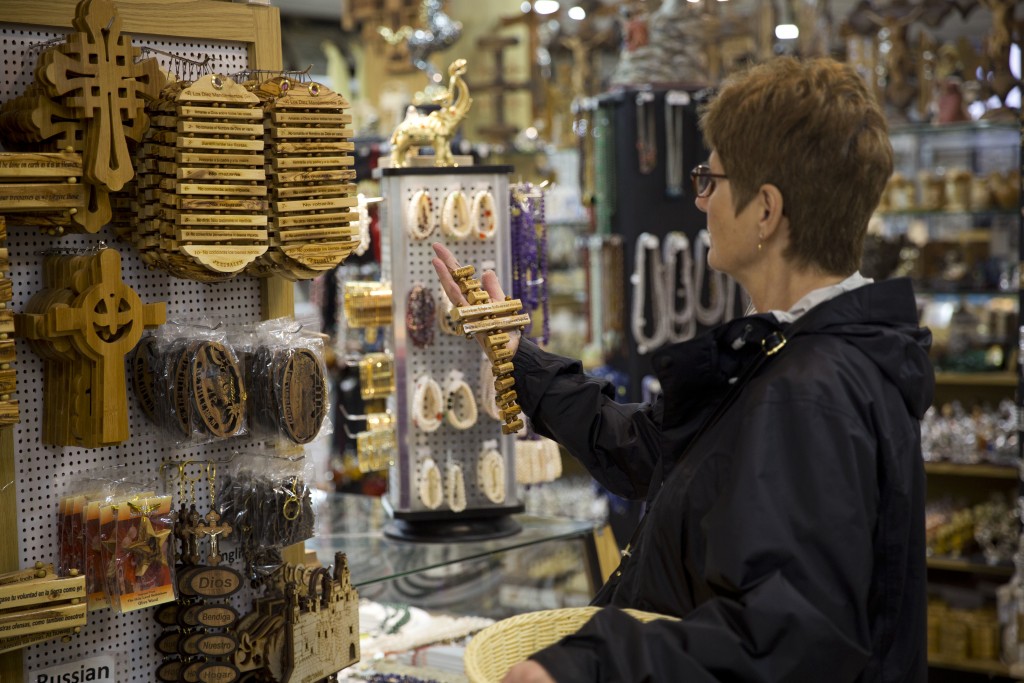 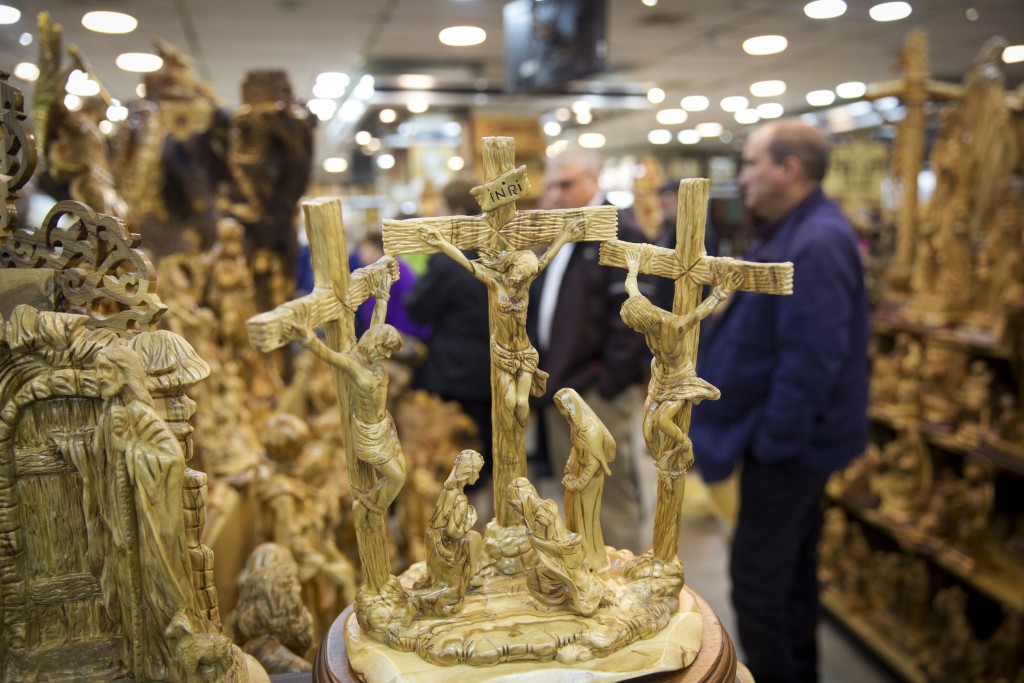 BETHLEHEM, West Bank (AP) — A historic renovation of the Church of the Nativity is lifting spirits in the biblical town of Bethlehem ahead of Christmas, offering visitors a look at ancient mosaics and columns that have been restored to their original glory for the first time in 600 years.

City officials hope the renovation at the traditional birthplace of Jesus will boost tourism and a weak economy in the Israeli-occupied West Bank, and perhaps slow a decades-long drain of the Christian population from the lands where the faith was born.

"Christians are leaving the Holy Land due to the lack of peace and economic hardships and we are struggling to keep them in their homeland," said Bethlehem Mayor Anton Salman. "This is one of the ways."

The renovation started in 2013, a year after UNESCO declared the church a world heritage site, and is expected to be completed by the end of next year. The Palestinian Authority formed a committee of local Christian leaders to oversee the renovation and contracted an Italian company to carry out the project.

Ziad al-Bandak, the committee head, said it has collected $14 million out of $17 million needed. Roughly half of the funding has come from the Palestinian Authority and local Muslim and Christian businesses, and the rest from foreign donors.

"It has become such a beautiful church," he said. "Every Christian in the world would love to see it now."

One of Christianity's most sacred shrines, the church was built in the 4th century by Saint Helena over a cave where the Virgin Mary is said to have given birth. What pilgrims mostly see today is the basilica built by Byzantine Emperor Justinian I, who ruled from A.D. 527 to 565.

Neglected for decades before the renovation, the roof of the church was leaking, windows were broken, mosaics were covered in grime and walls and columns were damaged.

After five years of work, it has been transformed.

Emad Nassar, a Palestinian engineer overseeing the renovations, said the project started with the ceiling. Roughly 10 percent of the beams were replaced with wood imported from old destroyed churches in Italy, windows were fixed, and outside stones and walls were renovated.

The restoration process is meticulous and painstaking. As Nassar spoke, three Italian workers were cleaning a mosaic with tiny brushes and covering them with protective material.

"In the coming year, we are going to continue renovating the columns, the floor mosaic, the tiles and the front yard floor," Nassar said.

The delicate relations between the Holy Land's major Christian denominations have factored into the poor condition of the church. The Roman Catholic, Greek Orthodox and Armenian churches have traditionally viewed each other with deep suspicion.

Under a 19th-century agreement called the Status Quo, each denomination has its own areas and responsibilities. But over the years, turf battles have erupted into arguments and even fistfights among clergymen.

Father Samour, a 70-year-old Greek Orthodox clergyman who has served at the church for nearly half a century, said the Palestinian Authority managed to get the rival churches on board.

The construction did not touch the altar crypt with the 14-point silver star marking the spot where, according to Christian tradition, Jesus was born. Although it also needs renovation, the churches have not yet reached an agreement on the crypt.

Bethlehem is heavily dependent on Christmas tourism, with hotels, restaurants and gift stores doing much of their business during the short holiday season. The renovated church has become a popular destination.

"The mosaic on the walls is very beautiful, and the renovation is very impressive," said Sandris Gradins, a 31-year-old tourist from Latvia.

After dipping in 2015 and 2016, tourism has seen a comeback in the past two years, officials say. The mayor said he expects 1.2 million visitors this year.

Tourism Minister Rula Maayah said she is working with Christian officials to expand visiting hours to accommodate the long lines.

An ambitious program has been set up for Christmas this year, she said. The municipality recently hosted representatives of 14 twin cities from around the world for a Christmas tree lighting ceremony. Foreign musicians performed Christmas songs during the event.

Fifteen European countries participated in a Christmas market in the front yard of the church. The municipality also has been building a Christmas village for children.

But whether the city's efforts can stop the long-term outflow of Bethlehem's Christians remains to be seen. As elsewhere in the Arab world, the local Christian community has struggled for decades, escaping conflict and economic troubles in search of better opportunities abroad.

In the Holy Land, Israel's half-century-old occupation of the West Bank and east Jerusalem, and more than a decade of rule by the Islamic militant group Hamas in Gaza have significantly worsened the situation.

Roughly half of Palestinian Christians live in the Bethlehem area, where their share of the population has also declined significantly.

Wadie Abunassar, a senior adviser to church leaders in the Holy Land, said the Palestinian leadership in the West Bank has treated Christians well, but that lack of progress toward a resolution with Israel and Palestinian statehood have driven emigration.

Despite lack of hope, he urged Christians to stay.

"This is our homeland. We are called to be witnesses for Jesus in his homeland," he said. "This is a great privilege, which most Christians in the world don't have."