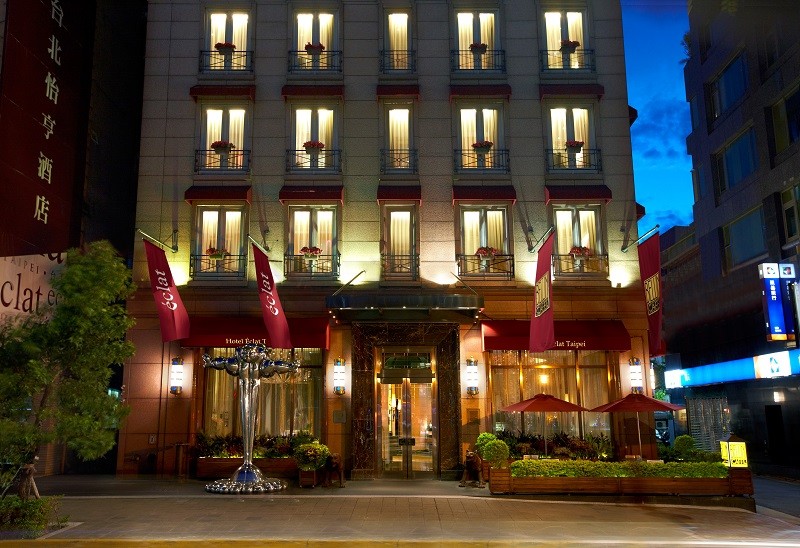 TAIPEI (Taiwan News) – If a hotel strikes you as a luxurious home the moment you walk through the front door, the hotel must be doing something right, and that’s exactly the feeling Hotel Éclat Taipei is conveying to its guests.

Hotel Éclat Taipei is located beside a tree-lined boulevard in a relaxing Taipei area separated from the hustle and bustle of a busy commercial area or a transportation hub, yet the location is blessed with the convenience of being close to two Taipei MRT stations, providing quick and easy links to the rest of the city and the greater region.

The hotel makes its guests feel as if they are living in a luxurious home by decorating the public spaces with very unique artworks, with each being one of a kind. Furnishing every guest room with high-end amenities, such as a comfortable branded bed, high-speed Wi-Fi connection, and a complete set of high quality stationary, as well as the hotel employees’ warm interaction with guests make for a pleasurable stay.

In addition, the hotel also has a meeting space to accommodate the conference needs of between 10 to 100 people, as well as providing catering services for meetings.

As befitting the warm ambience it creates for its guests, Hotel Éclat Taipei is a member of Small Luxury Hotels of the World (SLH), which has over 500 member luxury hotels in more than 80 countries. Currently there are only two SLH hotels in Taipei.

Hotel Éclat Taipei general manager Amy Yu said that the SLH membership has helped bring more guests to their hotel, especially guests from Europe. She said that, in order to keep the membership, the hotel has to maintain its already well-established ability and continue to meet the SLH high standards and scrutiny.

In a sluggish economic environment and increased competition from the opening of several similar hotels in Taipei, Yu said Hotel Éclat Taipei stands up to the competition with an exceptional occupancy rate of 78 – 80 percent. She attributed the hotel’s success to its high return rate of 30 percent, which in her view is a reflection of high customer satisfaction.

The general manager said most of their guests come from the United States, China, Hong Kong, Japan, Taiwan, and Korea, in that order.

Hotel Éclat Taipei also launches occasional promotional offers to boost its already stable business and benefit its guests. At present, the hotel is holding the “Winter Queen” promotional activity, offering extra amenities to female guests of its Grand Deluxe rooms and above, from now until Feb. 28 next year. The extra amenities include one Italian cocktail, organic comfort tea bags, Tesla airport pick up service, one organic facial mask, and a bottle of 50ml body lotion.

For more information about the hotel, please refer to its official website.