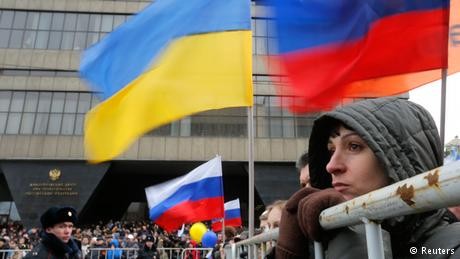 Since February 27, 2014, when the Russian annexation of Crimea first became visible with the occupation of the regional parliament in Simferopol by pro-Russian armed men, the question arose as to whether Ukraine should withdraw from the important friendship treaty with Russia.

In Article 2 of the treaty, which came into force in 1999, both sides agreed to respect their respective territorial integrity and existing borders. From Kyiv's point of view, Russia grossly violated the treaty with the annexation of Crimea and the covert war in the eastern Ukrainian coal-mining region of Donbass.

What many Ukrainians consider long overdue is finally coming to pass: The parliament in Kyiv voted in favor of President Petro Poroshenko's bill not to automatically renew the treaty for another 10 years as originally planned. It will, therefore, expire on April 1, 2019.

In previous months, Ukraine informed both Russia and the UN of its intention not to renew the treaty. The Ukrainian government mainly used legal arguments to explain why Kyiv only now decided to do discontinue the treaty four years after the annexation of Crimea.

The treaty has been referred to during various lawsuits against Russia before international courts. Moreover, there were fears that the withdrawal from the treaty would "unleash" Russia, according to Ukrainian experts. Apparently, Ukraine no longer holds such concerns. The decision was, however, against a formal withdrawal, but in favor of a non-renewal. From Ukraine's point of view, this way is simpler under international law.

A cornerstone of relations

The Treaty on Friendship, Cooperation, and Partnership was dubbed the "Great Treaty" because it laid the foundations for relations between former Soviet sister republics and put an end to years of tensions between Moscow and Kyiv. In short, Russia finally recognized Ukraine as an independent nation, including Crimea.

On May 31, 1997, the treaty was signed in Kyiv by the then-presidents of Russia and Ukraine, Boris Yeltsin and Leonid Kuchma, but it only came into force after both parliaments ratified it in April 1999.

The fact that such an agreement was not reached until six years after the collapse of the Soviet Union was mainly due to the dispute over the Black Sea Fleet. Just three days before the signing of the treaty, Russia and Ukraine signed an agreement on the status and distribution of the Black Sea Fleet, in which Russia received the lion's share of the ships. Ukraine allowed the fleet to be stationed in Crimea until 2017. Only then was the treaty able to be concluded.
Read more: Moscow-Kyiv spat signals storm warning on the Black Sea

Despite its importance, the treaty largely only contains general statements, such as a commitment to a "strategic partnership." Critics complain that it does not contain any mechanisms for conflict resolution. In the years that followed, Russian-Ukrainian friendship was repeatedly tested.

The already seriously crumbling relations were further strained in late 2003. There was a dispute over the Ukrainian island of Tusla in the Kerch Strait when Russia tried to connect it to its mainland by building a dam. Then came the gas dispute in 2006, when Moscow turned off the supplies to Ukraine for the first time, although the treaty expressly forbids economic pressure. On both occasions, Kyiv protested loudly against the Russian measures but still kept to the treaty.

In the summer of 2008, the treaty was on the brink of collapse from the Russian side. The lower house of the Russian parliament, the State Duma, suggested to then-President Dmitry Medvedev that he consider withdrawing from the treaty if Ukraine were to make a bid for NATO membership.

At that time, the NATO summit in Bucharest sidelined the prospect of Ukraine's accession to the distant future. But a Membership Action Plan (MAP), a kind of pre-accession program that Kyiv was striving for, was rejected. Yuri Luzhkov, the then-mayor of Moscow, proposed to let the treaty with Kyiv expire in order to question Ukraine's ownership of Crimea. At the time, the Kremlin decided against allowing an expiration.

No consequences for border issues?

The consequences of ending the treaty in 2019 remain unclear. From Kyiv's point of view, the border issue is unaffected due to a separate treaty on the border between Russia and Ukraine from 2003 that will remain in force.

Read more: Germany offers to mediate between Russia and Ukraine