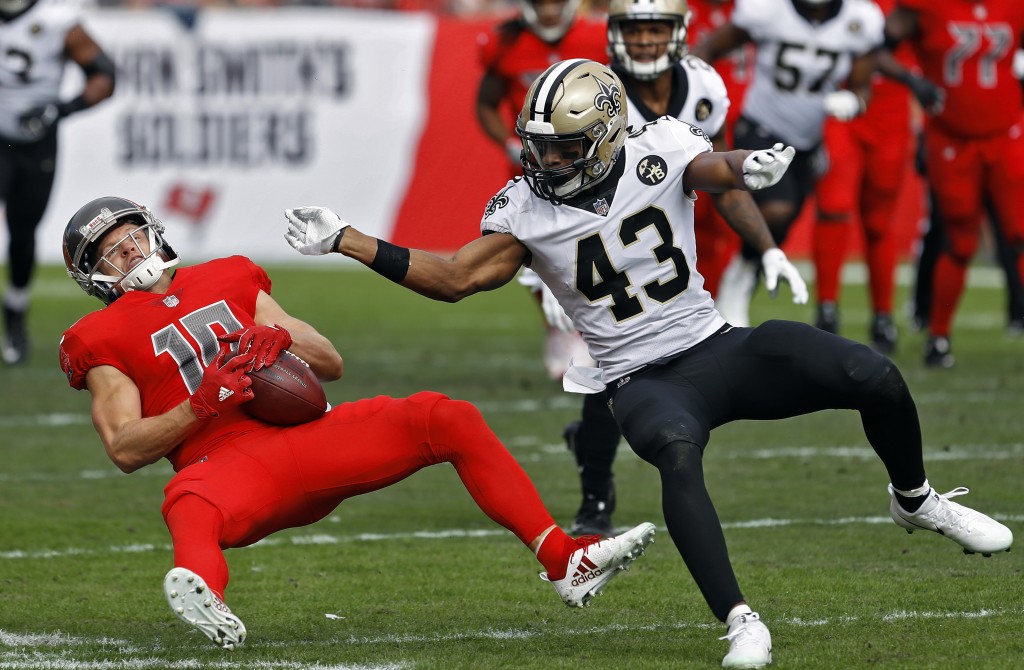 TAMPA, Fla. (AP) — Drew Brees threw for one touchdown and ran another Sunday to help the New Orleans Saints rally from an 11-point halftime deficit to clinch their second straight NFC South title with a 28-14 victory over the Tampa Bay Buccaneers.

Brees shrugged off a pair of turnovers to throw a 1-yard TD pass to Zach Line, then scored on a 1-yard sneak as the Saints (11-2) avenged a season-opening loss to Bucs (5-8) and also rebounded from a defeat last week at Dallas.

New Orleans' defense did its part after allowing two first-half TDs, too, sacking Jameis Winston four times and limiting the NFL's No. 1-ranked offense to 81 yards in the second half — most of that on the final drive of the game.

Brees completed 24 of 31 passes for 201 yards and one interception. Michael Thomas had 11 receptions for 98 yards.

A week after being held to a season-low 176 yards total offense in a 13-10 loss to Dallas that ended a 10-game winning streak, the Saints started slowly again.

Winston threw a pair of TD passes to Cameron Brate, the latter a 1-yarder set up by Adarius Taylor's interception to put the Bucs up 14-3 at halftime. The fourth-year pro also threw an 11-yarder to Brate on the opening drive of the game.

The game turned in the third quarter when Brees weathered losing a fumble at his own 27 and later took advantage of the Saints blocking a punt to set up his TD pass to Line, along with Alvin Kamara's 2-point conversion that trimmed Tampa Bay's lead to 14-11.

In addition to missing a 40-yard field goal after Jason Pierre-Paul recovered Brees' fumble, Cairo Santos also had a 46-yard attempt deflect off the right upright in the first quarter for Tampa Bay, which finished with 279 yards — more than 160 below its league-leading season average.

Brees' TD run put the Saints ahead early in the fourth quarter. Mark Ingram scored on a 17-yard run to make it 25-14.

Winston finished 18 of 38 for 213 yards, two touchdowns and one interception — an end-zone throw picked off by Marshon Lattimore with 1 second remaining.

Since failing to force a turnover on defense for seven consecutive games, the Bucs have 10 takeaways over the last three weeks. The Bucs have seven interceptions over that stretch after only having one in the first 10.

Buccaneers: at Baltimore next Sunday.