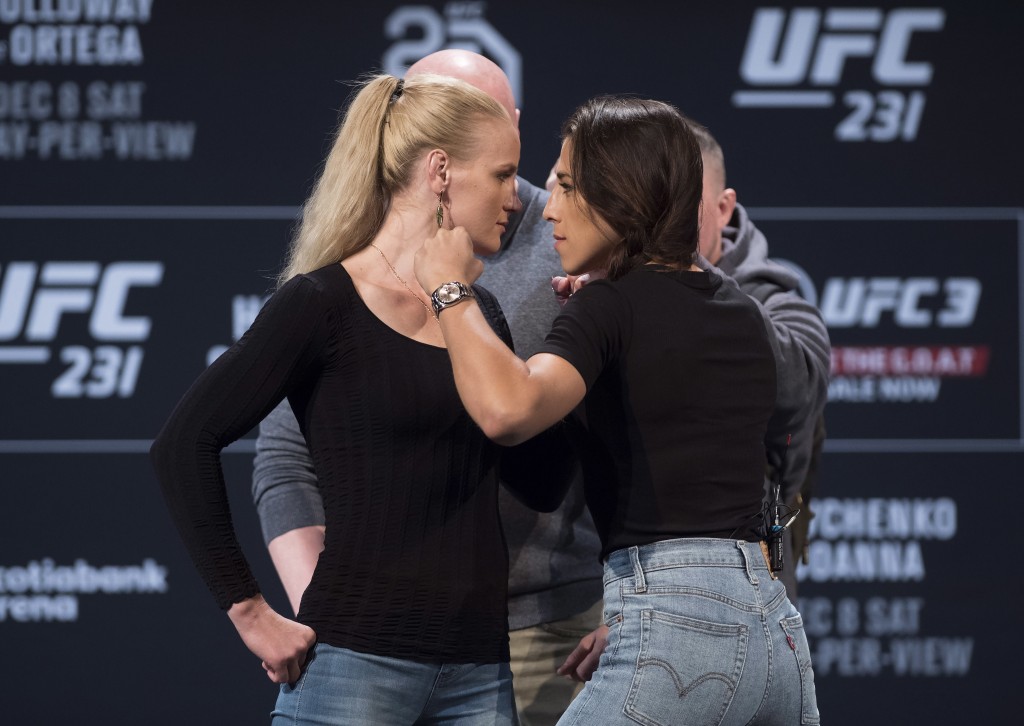 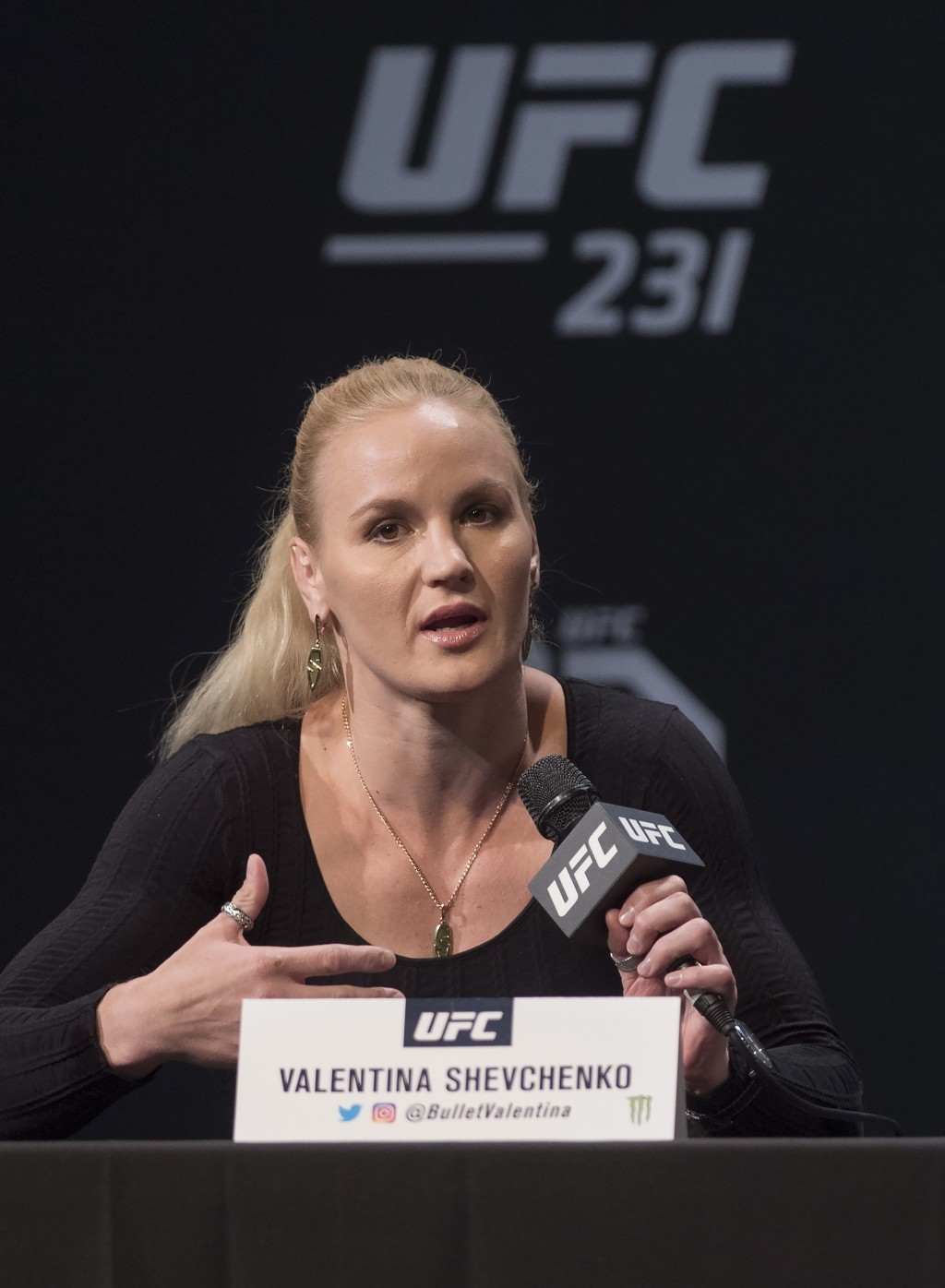 LOS ANGELES (AP) — Valentina Shevchenko and Joanna Jedrzejczyk were teenagers when they first fought at the muay Thai world championships in 2006.

A decade later, the fighters are meeting once again Saturday night, this time under the bigger, brighter spotlight of mixed martial arts at UFC 231.

Shevchenko won't go into this high-profile flyweight title fight with any false confidence, not after everything Jedrzejczyk has accomplished since their first bouts. Yet Shevchenko still thinks those long-ago results will make a difference in the octagon in Toronto.

"She can say that it's not affecting her, but yes, it's affecting her," Shevchenko said. "Fighters can say whatever, but what they're feeling inside, it's totally different. It's affecting everyone, for sure. Of course it was years ago. Of course she changed and improved as a fighter, same as me. All experience will help, and each experience I got from that fight will help me in this fight."

The rekindling of this long-standing rivalry could be exactly what the UFC needs in the women's flyweight division, which has been in upheaval pretty much ever since it opened last year. Shevchenko is eager to establish order among the world's best 125-pounders while earning the UFC belt that has long eluded her.

To get it, Shevchenko (15-3) still has to get through Jedrzejczyk (15-2), the former strawweight champion moving up to claim a second title.

Shevchenko realizes the difficulty of her task, but she can also see her ultimate goal is just five rounds away.

"No one else can pretend to be the best here, because this is my weight," Shevchenko said. "This is my division. This is my place."

Shevchenko has been looking for her place all her life.

Born to a Ukrainian family in Kyrgyzstan three years before the Soviet Union broke up, Shevchenko has been traveling the world on a martial arts quest for over a decade with her sister, Antonina, who is also a fighter. The sisters and longtime coach Pavel Fedotov settled in Peru a decade ago, but Shevchenko still trains in gyms all over the world, working to hone her technique. For this fight, she worked in Thailand and Las Vegas before heading to Canada.

Shevchenko and Jedrzejczyk even trained in the same gym in Thailand for two months earlier in their careers.

"We never were enemies," Shevchenko said. "When we were competing, we didn't talk to each other too much, but it was nothing personal where you hate somebody. Of course, when we were in different weight classes, we were speaking a little bit more."

They haven't fought since Shevchenko decided to stop cutting weight to the 55-kilogram limit for muay Thai after 2008. When the UFC began to add women's divisions six years ago, Jedrzejczyk chose 115 pounds and Shevchenko chose 135 because they were the closest to their desired weights.

The UFC opened a 125-pound women's division last year, but curiously decided to crown its champion from a season of "The Ultimate Fighter," its long-running reality competition TV show.

Nicco Montano won the show and the belt, but nearly everyone in MMA thought the division was Shevchenko's for the taking. Shevchenko's only two losses in the past eight years were narrow decisions against bantamweight champion Amanda Nunes, and the 125-pound weight limit suited her much better.

"I think the 125 division will be the most interesting to watch and the most active," Shevchenko said. "It will be exactly where all the action will be going. We just have to start this action."

Shevchenko was scheduled to fight Montano for the title in September, but Montano was stripped of the belt and hospitalized after a failed weight cut. Nunes also ended up in a hospital right before a scheduled bout with Shevchenko last year, frustrating the challenger.

"I am looking forward to fighting someone who is really a professional," Shevchenko said. "I'm tired of these fighters who aren't professional, who can't cut weight or who are causing all this trouble. I would like to have more really responsible fighters inside of the organization."

Jedrzejczyk had weight cut issues at 115 pounds, but they're unlikely to bother her at 125. Shevchenko says her own cut is simple: "Just don't eat for one day."

Meanwhile, Jedrzejczyk needed a new goal after losing her 115-pound title last year to Rose Namajunas, who also beat her in an April rematch. Although Jedrzejczyk still insists she'll go back down to reclaim her strawweight title at some point, she decided to move up 10 pounds to take on Shevchenko for another belt.

Even without the fighters' backstory and the belt at stake, the fight is a compelling contrast between two elites with markedly differing styles.

Jedrzejczyk is a furious, high-volume striker with a persistent jab and an eagerness to pressure every opponent. Shevchenko is a determined, accurate counterpuncher — and her power could be a problem for Jedrzejczyk, who has taken significant damage in recent fights.

"I think it will be a very good striking fight," Shevchenko said with a grin. "Oh, a lot of hits."