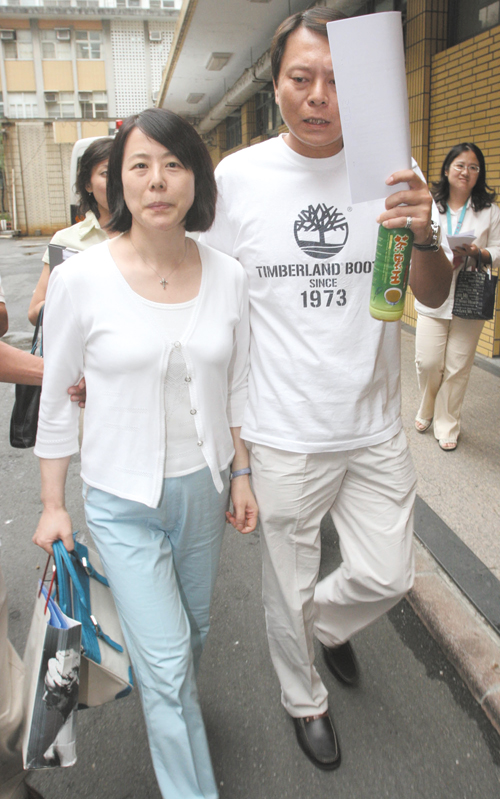 An investor protection agency yesterday won the right to demand compensation from the husband of former Procomp Informatics Ltd. Chairwoman Sophie Yeh on behalf of shareholders who suffered large losses after she was found guilty of embezzling the company's assets.
The Taipei District Court ruled that The Securities and Futures Investors Protection Center could ask Yeh's husband, Walter Lin, for NT$10 million because she gave him a substantial sum of money before the embezzlement scandal was uncovered.
Yeh was sentenced in December 2005 to 14 years in jail and fined NT$180 million by the Shihlin District Court for embezzling NT$500 million in company's assets, although prosecutors put the figure at closer to NT$7 billion.
Procomp, once Taiwan's largest maker of gallium arsenide epitaxial-based communications chips used in mobile phones, was delisted from the nation's major stock market, the Taiwan Stock Exchange, in September 2004 due to the scandal.
In addition to Yeh, the scandal led to the conviction of 27 other Procomp executives at the Procomp.
Judges noted that the chairwoman diverted the company's assets through accounting fraud and inflated the company's sales by illegal means to mislead investors into believing that Procomp was a promising company. After hitting NT$368 in March 2000, the stock price had nearly lost all of its value after rumors of accounting fraud surfaced in mid-2004, resulting in heavy losses for investors.
After accepting complaints filed by several thousands of Procomp shareholders seeking compensation from the bankrupt company, the investor protection center filed suit with the Shihlin District Court to ask Yeh and other high-ranking executives of the company for compensation of NT$5.8 billion.
Yeh's husband, the former head of Waterland Financial Holding Co., became involved in the case based on testimony from Yeh's English secretary Kung Yi-chen, who told investigators that Yeh remitted over NT$90 million to Lin's personal account before the accounting fraud at Procomp came to light.
While Yeh denied she and her husband had a creditor-debtor relationship, the investors' protection center argued that the NT$90 million remittance constituted a loan because no other reason was provided for the transaction.
It therefore requested and obtained the court's approval for a provisional attachment on Lin's assets and asked for compensation from him in the tens of millions of Taiwan dollars.
The Taipei District Court ruled yesterday that Yeh's loan to her husband was NT$10 million, and found that Lin should return that amount to the protection center in compensation to investors.