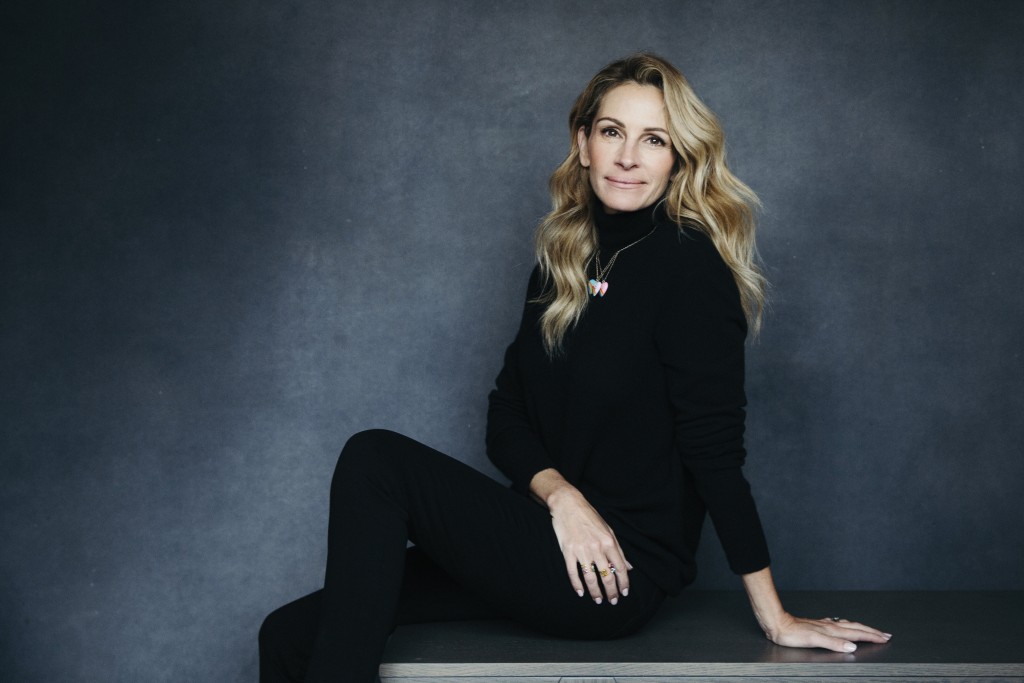 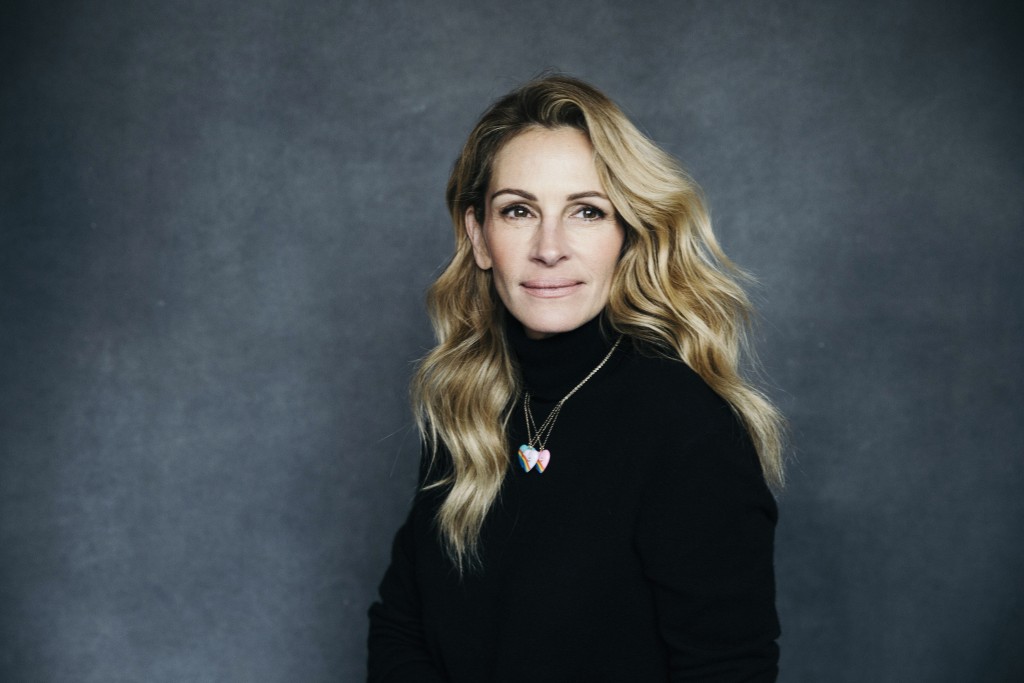 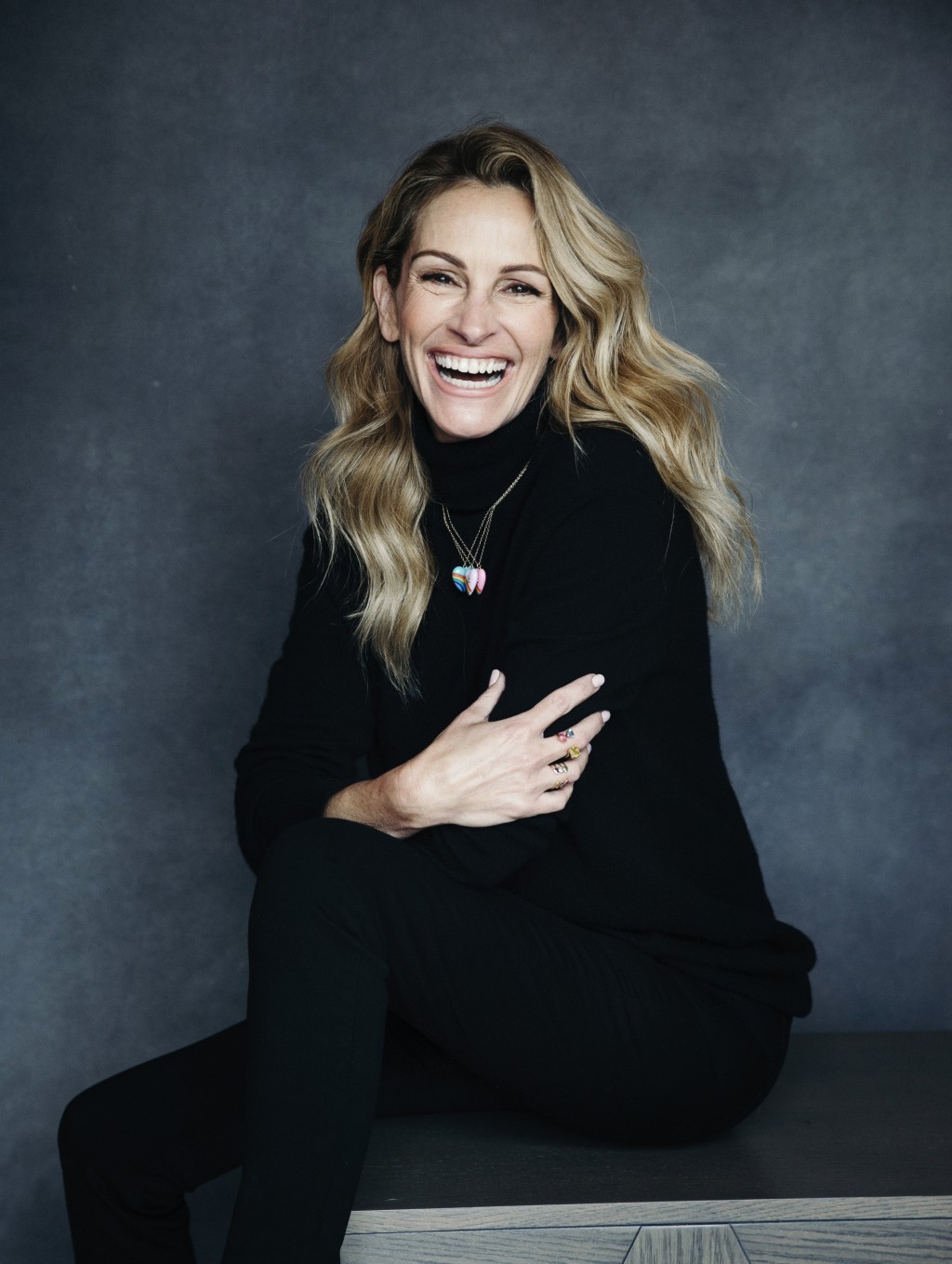 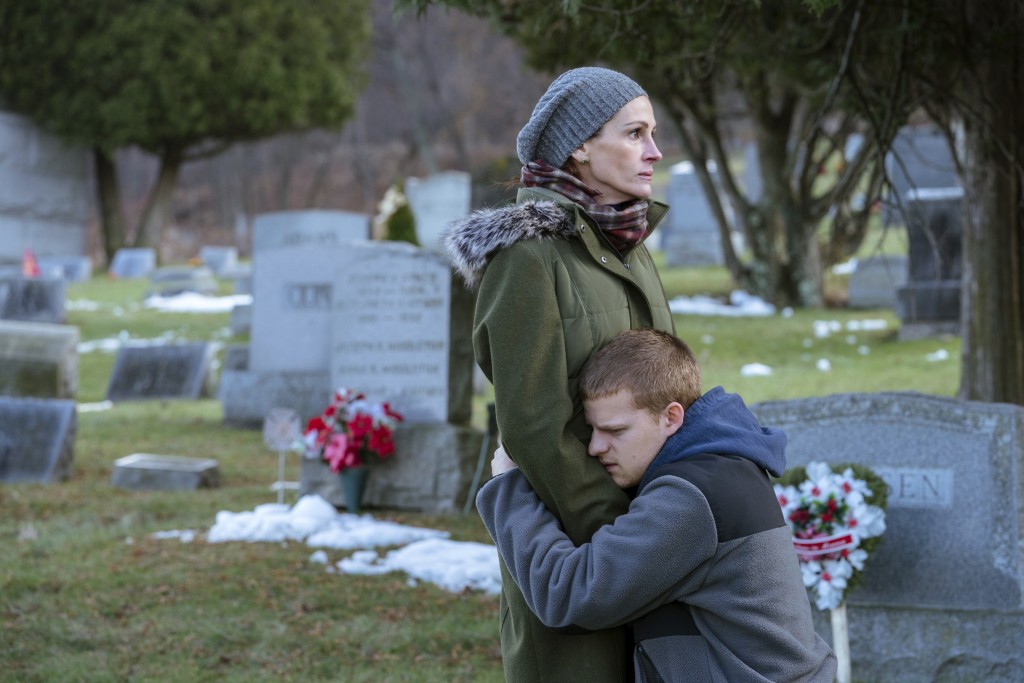 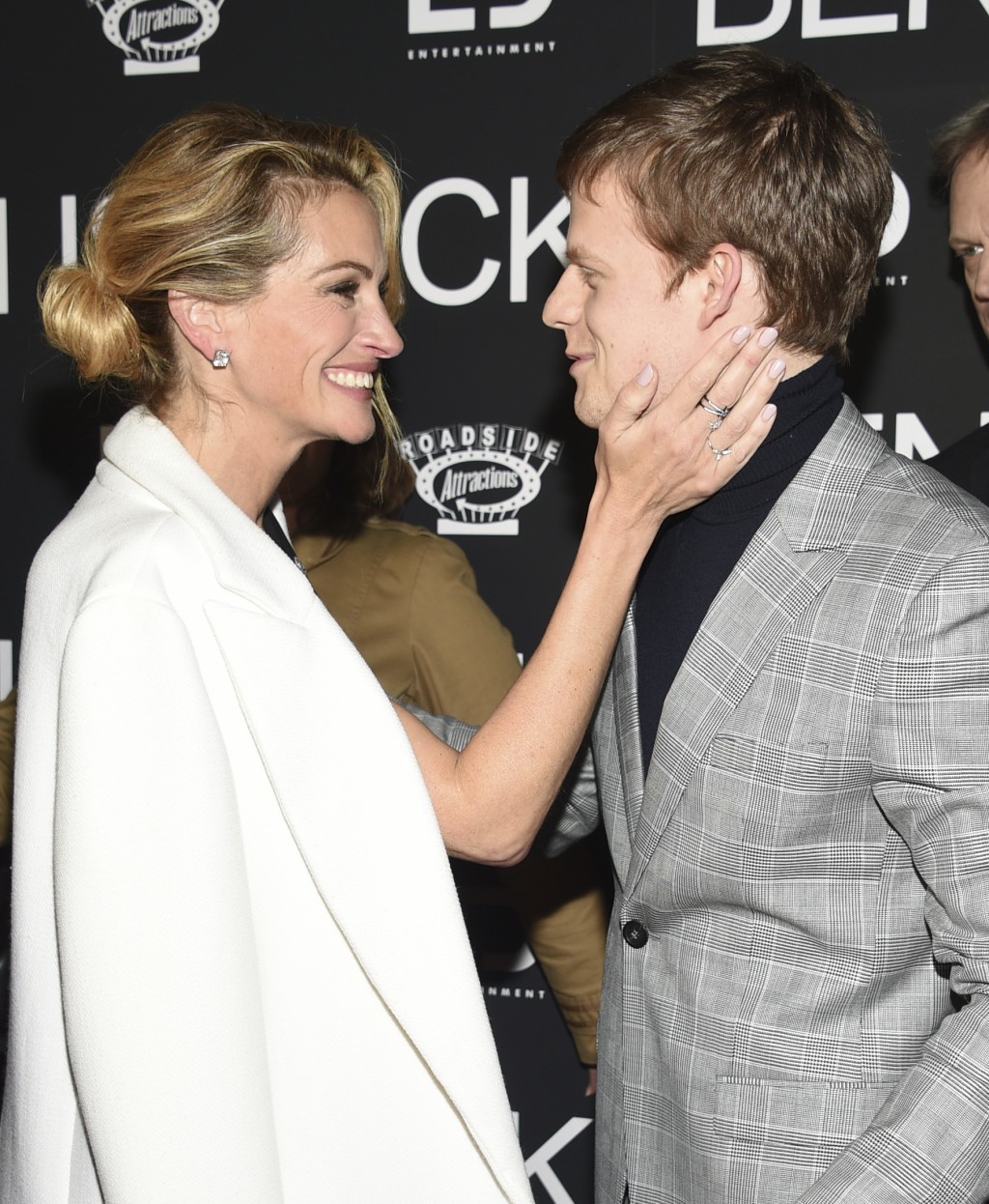 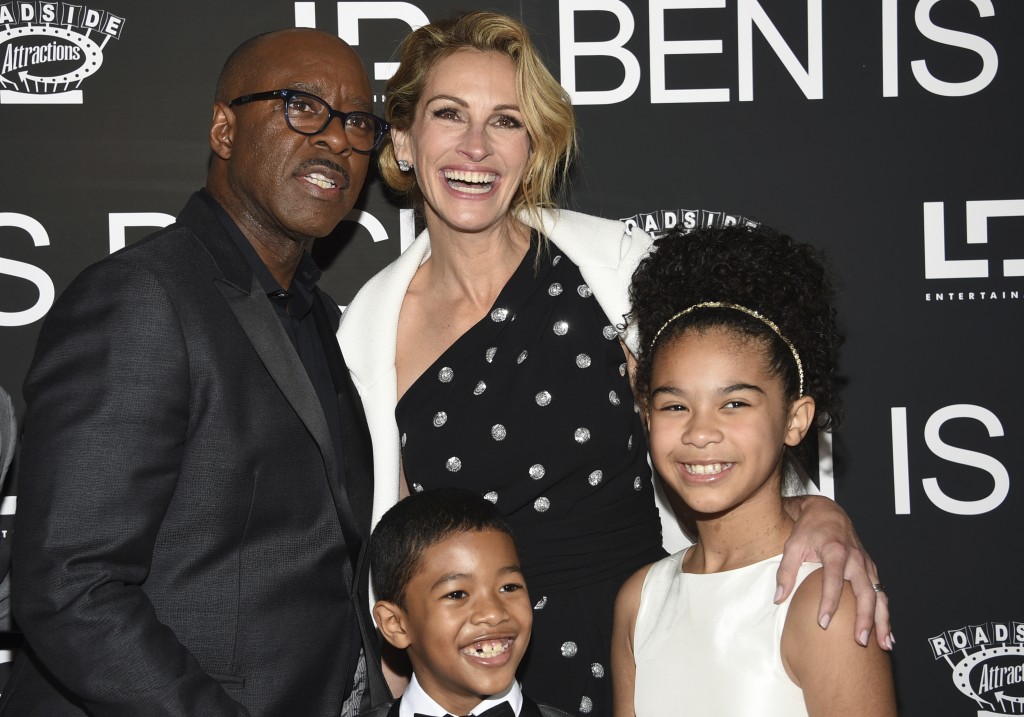 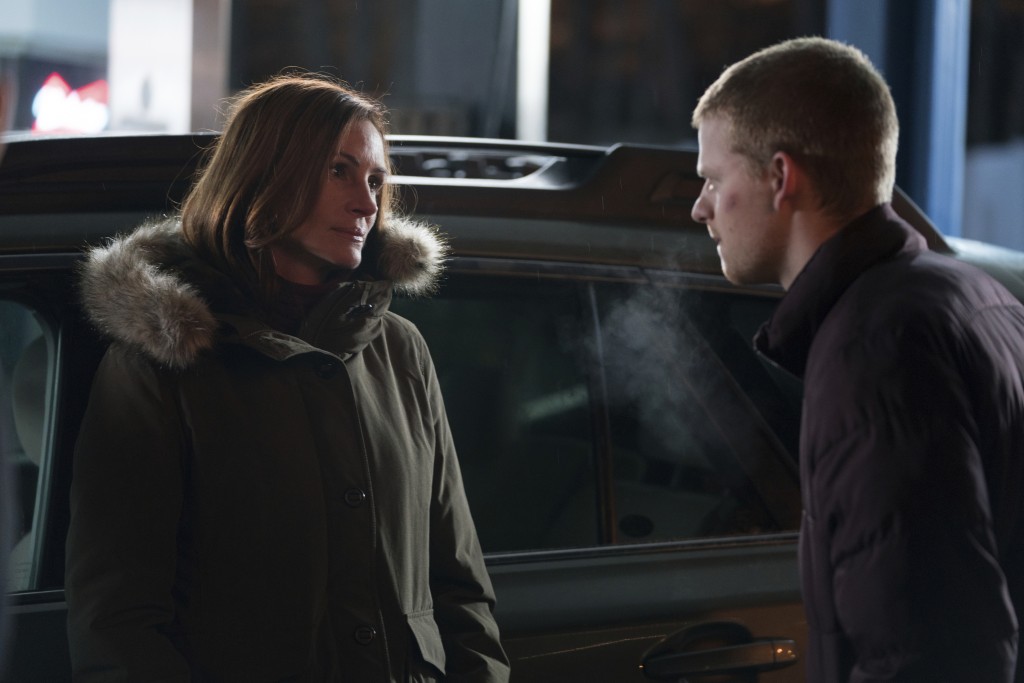 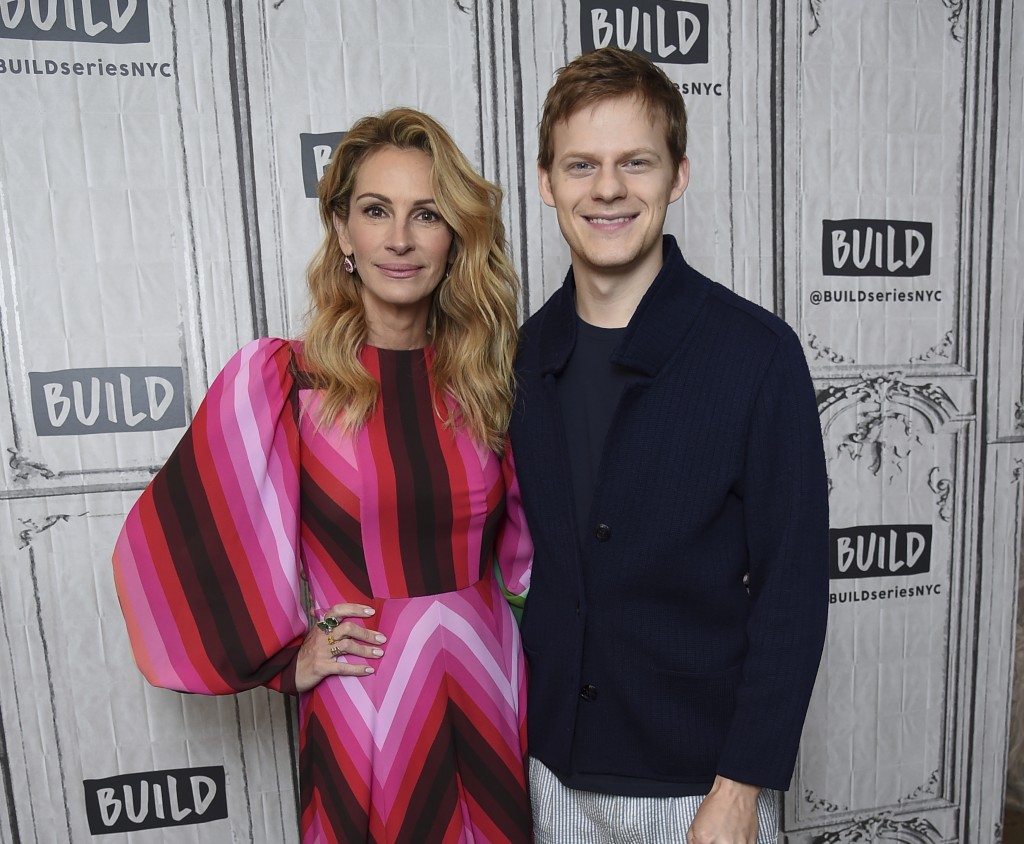 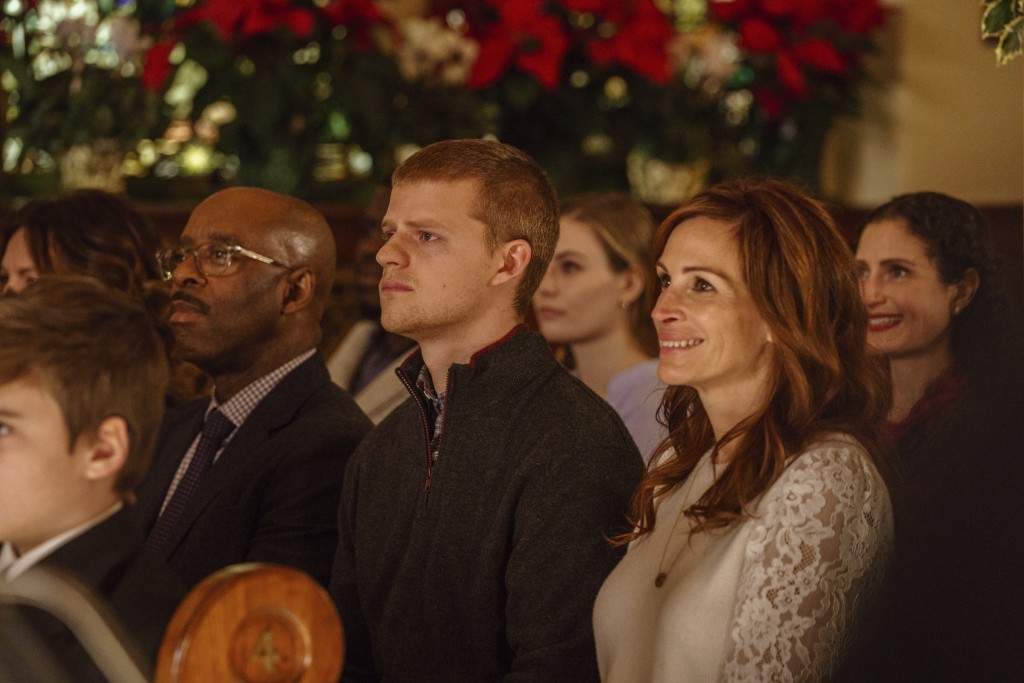 NEW YORK (AP) — Julia Roberts is sitting on a couch in a Soho hotel when Lucas Hedges bursts in and begins frantically searching for his phone, sending pillows flying.

"This is what I say to Finn," Roberts says, referencing one of her three children as she instructs her 21-year-old co-star. "Where did you go from here, honey?"

Roberts' motherly instincts play a big part of her latest film, "Ben Is Back." Written and directed by Peter Hedges ("Dan in Real Life," and the father of Lucas), "Ben Is Back" is about a son (Lucas) home from rehab for Christmas. The short visit resurrects past demons and present temptations for Ben, testing his mother's anxious balance of trust and suspicion.

It's the second standout performance this fall for Roberts, who also stars in Amazon's acclaimed conspiracy thriller "Homecoming" as a government-sponsored caseworker coaxing soldiers back into civilian life. It's a more dramatic chapter for Roberts, the most quintessential of movie stars, who at 51 is stretching in new directions that are increasingly further afield from the frothier romantic comedies she built her career on.

"With age comes more complexity of possible parts," Roberts said in a recent interview. "You know, I'm happy and I have fun at home, so it would take a lot for someone to say: 'Look, you can play this part where you're happy and have fun.' Well, I just do that at home!"

It can take a lot to get Roberts away from home. Hedges at one point jokingly suggested shooting "Ben Is Back" in her backyard. She's notoriously picky, generally acting in one film a year, and that's become iffier considering, as she says, there's "a whole lot of math" that needs to factor her kids' school schedule and that of her husband, cinematographer Danny Moder. Roberts has, quite contentedly, largely withdrawn from the limelight. She knits. She plays Mahjong with girlfriends once a week. She will watch "Point Break" anytime it's on TV.

But she still wears the role of movie star about as comfortably as anyone ever has, and in person she is — to an almost disarming degree — precisely as you'd expect. She remains genuinely, breezily, unaffectedly herself, a quality that has made countless feel as if they know — really know — her. Roberts grants that the public's impression of her is "probably relatively accurate," something few who have graced so many tabloid covers in their lifetime can do. "I mean, I'm not interested in trying to seem cooler than I am or something," she says.

"I wasn't prepared for how profoundly it made me miss Garry," she said, choking up.

"I wasn't prepared for how all of the improvs that I created are in a Broadway book now," she says. "People are saying things that I was just making up, just vamping."

And long before pay equality became an industry-wide concern, Roberts was among Hollywood's highest paid stars. Asked about the #MeToo movement and Hollywood gender parity, Roberts replied, "You can never rest."

"You think that's sorted and you come around a corner and then how is it not sorted suddenly? How is it not fair?" she says, noting a few advancements that hit home for her and her family: equal pay for women surfers and Manchester United launching a women's team. "Things like this give me hope that our business can keep making strides, because every year that it's 'the year of the woman,' you kind of go: Again? Let's just have it always be the year of the artists. If we have to keep spotlighting the gender of this and the gender of that, we're kind of blowing it."

Lately, Roberts has been trying some new things. She joined Instagram in June. "Homecoming" is her first foray into a TV series. Roberts insisted Sam Esmail ("Mr. Robot") direct all the episodes and that all the scripts be completed before shooting began.

She similarly helped shape "Ben Is Back," pushing for Peter Hedges to cast his son, the in-demand breakout star of "Manchester by the Sea," a tall task because Lucas has deliberately sought to establish himself outside of his father's shadow.

"When Julia read the script and met with me, I came with a list of actors that I thought would be good for the part, and Lucas wasn't on that list," Peter Hedges said by phone. "Before I could even share that list with her she said: 'Lucas needs to play this part.' I said, 'One, I don't think he's available, and, two, I don't think he would ever want to do a film with me.' Once she signed on, she began a very persuasive and I think classy campaign. She made effort to let him know that she thought he should do the film with her."

It is, alas, hard to say no to Julia Roberts. The actress later invited Lucas to her Malibu home where she says he became part of the family, hanging out and taking her kids to the beach. Making "Ben Is Back" was for her less about channeling her own parental nightmares than fostering a relationship with her fictional son.

"Spending time with Lucas meant that I had heart-space with him, and that is what I called upon and relied upon for the movie," says Roberts. "Separation is important. Especially in the middle of the night when you're playing a scene over and over again, you just have to have so much clarity about that jumping off point. I think that helps it be super clear and fair. I don't want to drag my kids through this crap."

Like much of Roberts' best recent work, including "Wonder" and "August: Osage County" (for which she received an Oscar nomination), "Ben Is Back" revolves around family, both on and off screen. While her next film, "Little Bee," is a drama, too, Roberts hasn't turned away from romantic comedies for good.

"It's just two delicious things put together," says Roberts. "It's like spending months wrapping a present for people. They're really hard to make well, so I don't begrudge their absence because I'd rather not see a bunch of really bad ones."

But "Ben is Back" and "Homecoming" have allowed Roberts to expand on the dramatic work she did with Steven Soderbergh ("Erin Brockovich") and Mike Nichols ("Closer," ''Charlie Wilson's War"), who once said of the actress: "Her face is made by God to express thought and feeling."

What's left for Roberts to prove? To her, that's not the question.

"I've never been in the proving business, but I do reside very humbly in the I-want-to-impress-you business," says Roberts, noting her husband is at the top of that list. "I just remember the feeling of walking on the set everyday with my beloved Mike Nichols and thinking: What can I do in my work today that he'll go: 'I didn't see that coming.'"