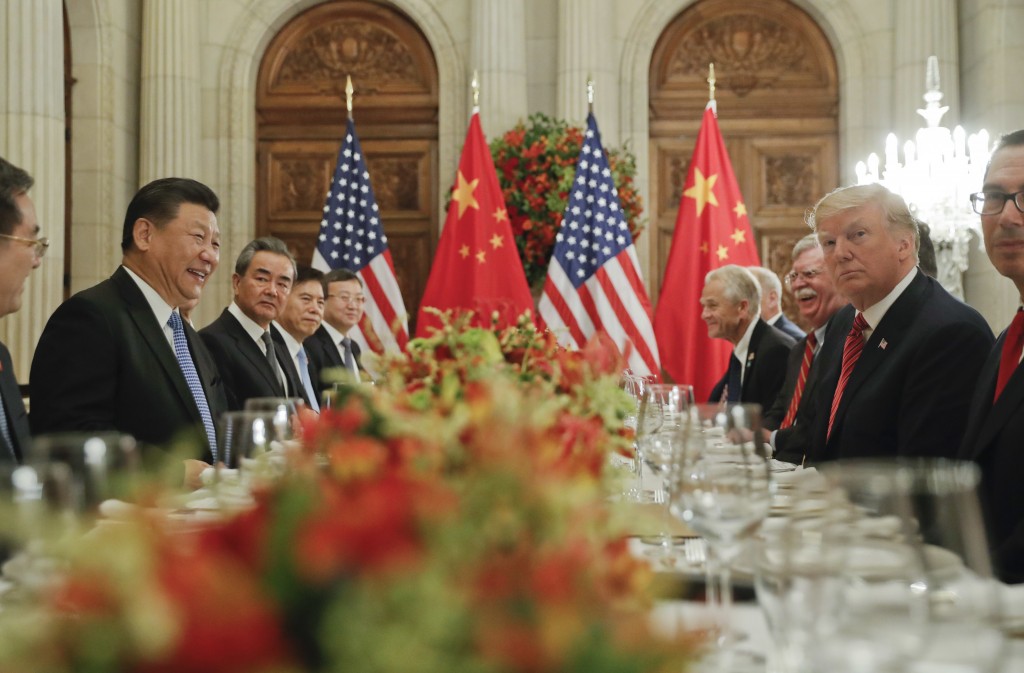 NEW YORK (AP) — The global economy was already showing signs of a slowdown when President Donald Trump reminded the world of his love of tariffs and sent a chill through financial markets.

"I am a Tariff Man," Trump announced Tuesday to signal his devotion to import taxes — a remark that served to downplay the likelihood of ending his trade war with China. Stocks sank across the world, in part over fear that an escalation in tariffs would choke off economic growth and possibly send a global slowdown into a recession.

By Wednesday, Tariff Man had tweaked his message to suggest more optimism on the odds of forging a deal with President Xi Jinping. Their meeting last weekend at an economic conference in Argentina produced a 90-day truce, a suspension of further increases in U.S. tariffs on Chinese goods and a pledge by Beijing to buy more U.S. goods.

"Not to sound naive or anything, but I believe President Xi meant every word of what he said at our long and hopefully historic meeting," Trump tweeted. "ALL subjects discussed!"

Still, Trump's rattling of the global economy came at a precarious moment, with the economic outlook for 2019 dimming and concerns about a potential recession — if not next year then soon thereafter — rising.

The economic stimulus from U.S. tax cuts is beginning to fade. Britain is struggling to leave the European Union. Italy's debt is widening. China is trying to navigate a slowdown after decades of unsustainably fast growth. Germany, Europe's largest economy, shrank in its most recent quarter.

Global growth was already slated to slip to 3.5% next year from 3.7% even without accounting for the risks of escalating U.S. tariffs and China's counter-tariffs, according to estimates by the Organization for Economic Cooperation and Development, an intergovernmental think tank of 36 nations.

Now, businesses, consumers and nations must account for the chaotic confusion injected by Trump's evolving and conflicting messages about his administration's trade relationship with Beijing, said Ian Shepherdson, chief economist at Pantheon Macroeconomics.

Shepherdson worries that the president's fondness for tariffs might itself be enough to further suppress growth.

"The uncertainty caused by the whipsawing of his trade stance means that business investment will be delayed or canceled, marginal hiring decisions will be postponed and potential overseas business partners will look elsewhere," Shepherdson said.

Trump imposed tariffs of 10% on $200 billion worth of Chinese goods in September. Those tariffs were set to rise to 25% on Jan. 1. The president had also threatened to impose tariffs on essentially all the remaining goods from China that aren't already subject to his higher tariffs. The Trump-Xi dinner negotiations, though, led the two sides to hit pause and agree to 90 days of negotiations.

Trump says he wants to shrink a gaping $336 billion U.S. trade deficit with Beijing — the gap between how much America buys from China and how much it sells — and stop the Chinese from stealing or forcing the handover of U.S. technology and intellectual property.

Complicating the problem is that all this is happening against the backdrop of weakening growth around the world. The economy of the 19 countries that use the euro currency, for example, stumbled in the July-September period. Its quarterly growth halved to 0.2%. Worries escalated after data showed that the economies of Italy and Germany, which relies on global exports, shrank during the quarter.

"The global picture is getting murkier, and that'll impact the eurozone via trade and sentiment," Erik Nielsen, chief economist at UniCredit bank, said in a note to clients.

Italy is suffering from uncertainty over its economic outlook under a new populist government. The government wants to raise public spending, thereby adding to its huge debt load of over 130% — and even rekindling concerns of a return of Europe's debt crisis.

Brexit, meanwhile, is an unknown, with Britain in the midst of political turmoil. It's possible that it could leave the EU without any deal on future relations involving trade. That's a worst-case scenario that would immediately establish tariffs and customs checks on hundreds of billions of dollars in exports between Britain and the 27 other EU nations.

White House aides have suggested that Trump is promoting tariffs merely as a tool to forge agreements that would actually eliminate all import taxes. And at the opening of this week, the administration was already claiming progress with China on the purchase of $1.2 trillion worth of U.S. goods — even though White House officials couldn't supply any meaningful details.

Then, on Tuesday, Trump seemed to thumb his nose at that White House talking point by dubbing himself "Tariff Man."

"When people or countries come in to raid the great wealth of our Nation," he tweeted, "I want them to pay for the privilege of doing so."

The problem for the global economy is that tariffs tend to inflate prices, depress trade and reduce the incomes of everyday workers. That's because companies must either absorb the higher costs created by tariffs or pass them on to their customers.

The Tax Foundation, a conservative think tank, studied the $42 billion of tariffs already imposed by Trump, which include taxes on steel, aluminum, washing machines and the duties being charged on Chinese imports. Its analysis, released Wednesday, concluded that these tariffs had reduced incomes by an average of $146 for taxpayers who earn between $27,740 and $43,800. The tariffs also cut U.S. hiring by the equivalent of 94,300 full-time jobs.

If Trump proceeds with the additional tariffs he has threatened, the Tax Foundation analyst Erica York estimates that middle-income households would lose an additional $453.

AP business writers David McHugh in Frankfurt, Carlo Piovano in London and Joe McDonald in Beijing contributed to this report.