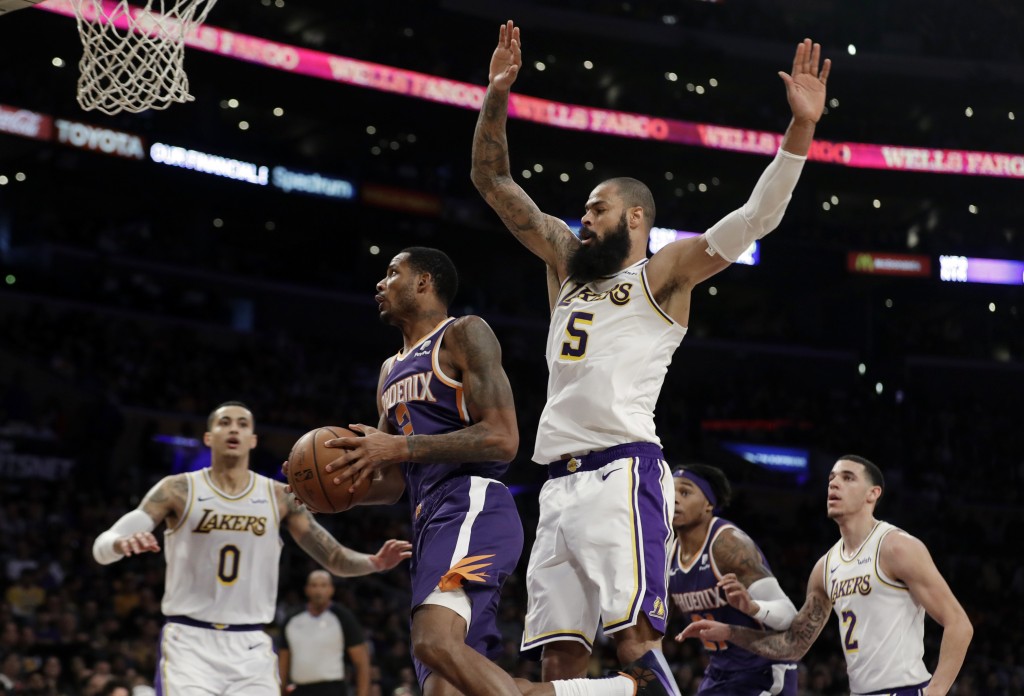 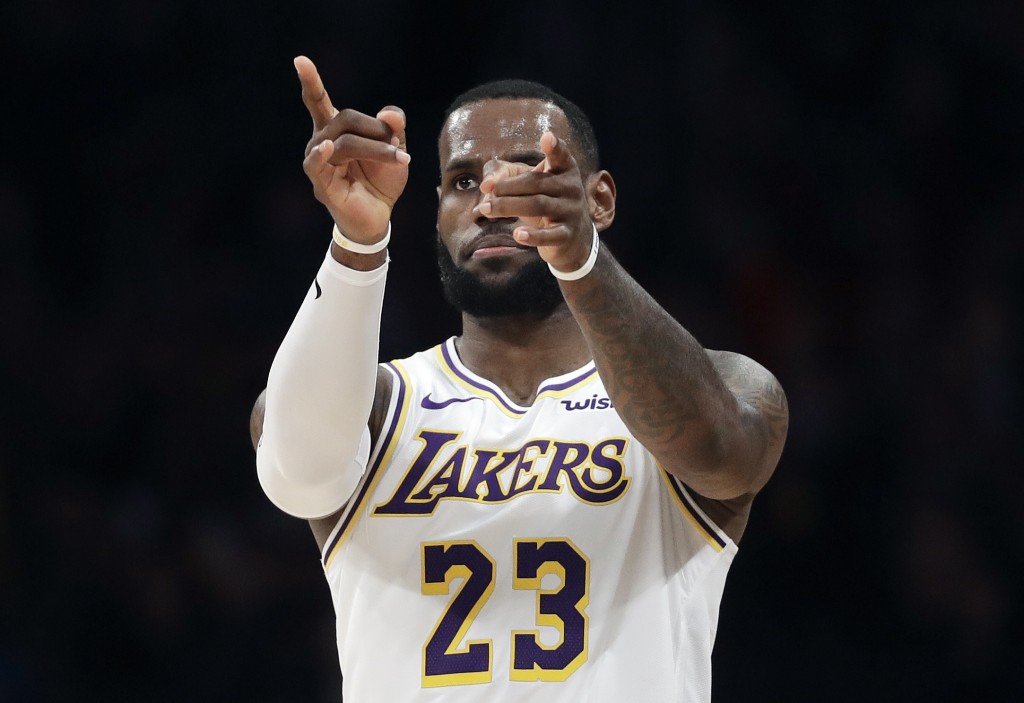 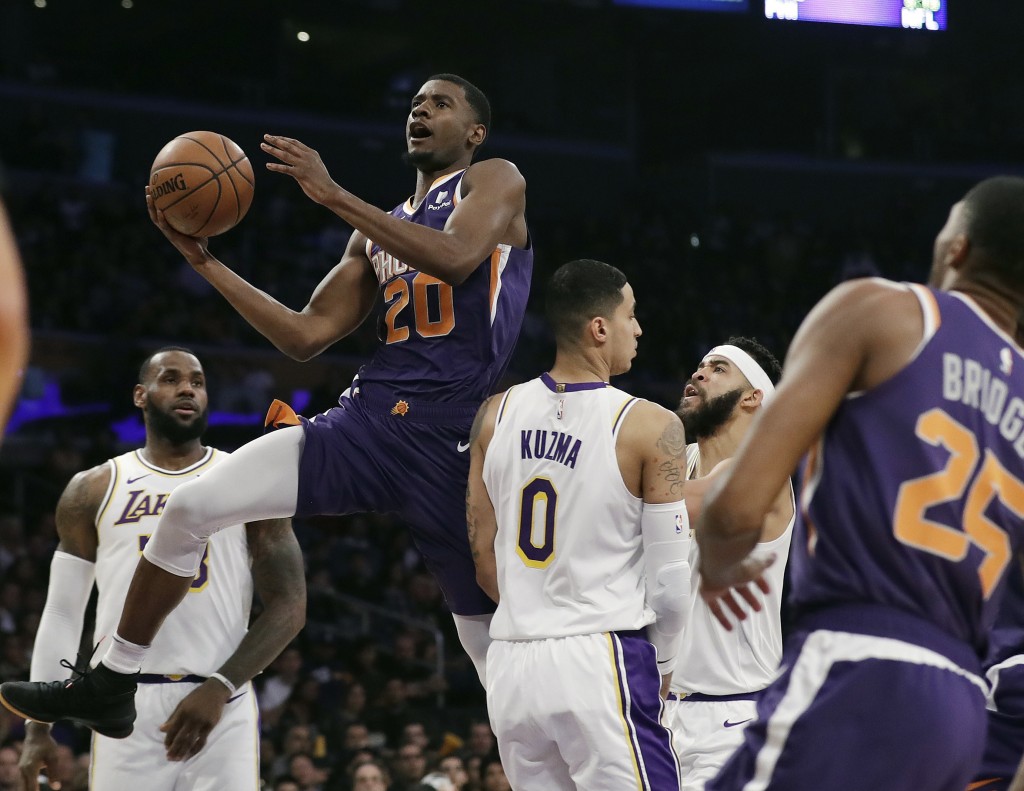 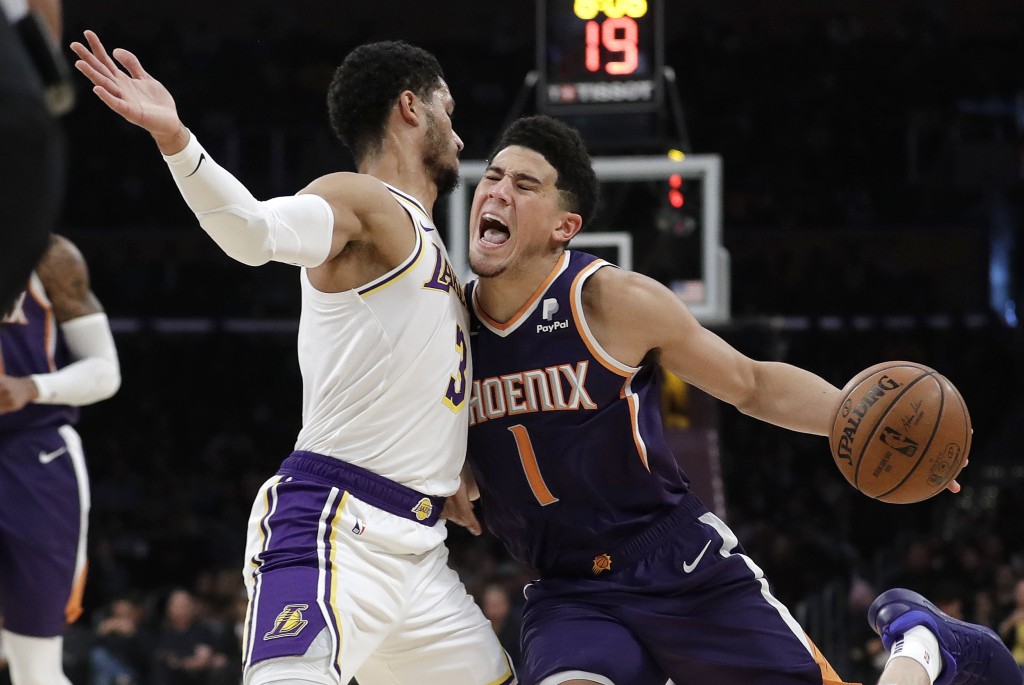 LOS ANGELES (AP) — Kyle Kuzma scored 23 points and LeBron James had 22 before both sat out the fourth quarter of the Los Angeles Lakers' third home victory in four days, 120-96 over the struggling Phoenix Suns on Sunday.

Brandon Ingram scored 15 points and JaVale McGee had 14 points and eight rebounds in three quarters of work for the Lakers. They have won 12 of 16 since their 2-5 start to James' first season on the West Coast.

Michael Beasley scored a season-high 14 points as the Lakers fell behind by 17 points in the first quarter, yet still made easy work of last-place Phoenix.

Richaun Holmes scored 15 points, and Josh Jackson and Trevor Ariza scored 13 apiece for the Suns. They have lost five straight to fall to 4-19.

Devin Booker scored six points before leaving with a strained hamstring in the second quarter. Booker hurt his leg while chasing a loose ball out of bounds, going immediately to the locker room.

Booker missed three games in October after straining his hamstring in the Suns' first game against the Lakers. He was returning Sunday from a one-game absence due to an injured left toe after stubbing it on his hotel bed during the Suns' trip to Los Angeles to play the Clippers last Wednesday.

No. 1 overall pick Deandre Ayton had 10 points and 10 rebounds for the Suns.

The Lakers didn't adapt well to the early start time, falling behind 25-8 in the opening seven minutes with a turnover-plagued beginning.

But Kuzma and James sparked an abrupt turnaround late in the first quarter, and the Lakers made a prolonged 45-18 run to a 15-point lead late in the second.

Los Angeles poured it on in the third, taking a 23-point lead with 10 point from James.

Suns: T.J. Warren missed his second straight game with ankle soreness, but coach Igor Kokoskov doesn't think it's serious. Jackson started for the second straight game in Warren's place. ... Ariza, who spent two seasons with the Lakers from 2007-09, attended Westchester High School near the Lakers' training complex before going to UCLA. He got a warm ovation from Lakers fans, many of whom would love to land his services as a 3-point shooting specialist for their team.

Lakers: Tyson Chandler had three points and 11 rebounds while facing the Suns for the first time since leaving Phoenix one month ago and signing with Los Angeles as a free agent. Chandler was an early mentor to Ayton.

Moritz Wagner scored the first 10 points of his NBA career in the fourth quarter of his fourth game for the Lakers. The first-round pick from Michigan by way of Berlin hit two free throws before getting his first field goal on a layup with 5:01 to play. He added a pair of 3-pointers a few moments later. The start of the 6-foot-11 Wagner's rookie season was slowed by a bruised knee in training camp.