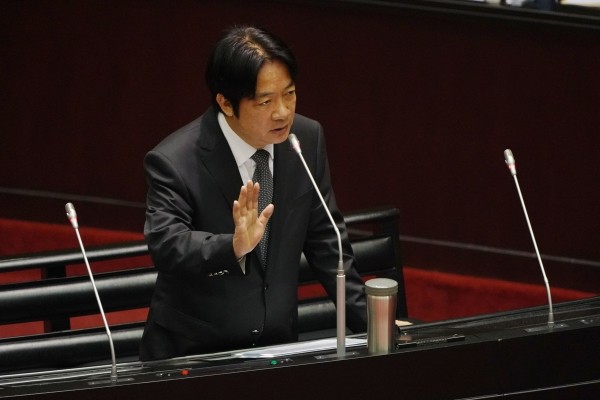 TAIPEI (Taiwan News) -- After a referendum in support of changing the Civil Code to allow for same-sex marriages was defeated, and those opposing it were passed in Saturday's elections, Premier William Lai (賴清德) is proposing creating a special law rather a change to the Civil Code.

In Saturday's nine-in-one elections, voters rejected a referendum calling for Civil Code marriage regulations to be changed to allow for same-sex marriage, while a referendum against allowing same sex marriage under the Civil Code was passed. In response, Lai said during a meeting with Democratic Progressive Party (DPP) legislators yesterday (Nov. 29) that he respects the results of the referendum and will not amend the Civil Code, instead, he recommends enacting a special law to guarantee the rights and interests of those seeking to join a same-sex union, reported Apple Daily.

After the meeting, spokeswoman for the Cabinet, Kolas Yotaka, said that the consensus among members of the Legislative Yuan and Cabinet is to "respect the results of the referendum," and the result was that it should be a law outside of the Civil Code, "of course that means a special law," reported Taiwan People News.

In response, some pro-same-sex marriage groups emphasized that if the special law is guaranteed by the Constitutional Court's interpretation of the constitution, meets the needs of same-sex partners, and is discussed between the court and LGBTQ groups, they can accept such a law, according to the Apple Daily report.

Lai's suggestion of creating a special law was in response to the passing of referendum No. 12, which states, "Do you agree to types of unions, other than those stated in the marriage regulations in the Civil Code, to protect the rights of same-sex couples who live together permanently?" The referendum was devised by Tseng Hsien-ying (曾獻瑩), president of the Coalition for the Happiness of Our Next Generation (ANGH), a group which advocates keeping the current definition of marriage under the Civil Code, and instead creating a separate law for same-sex couples.

Prior to the election, Pan Tien-ching (潘天慶), a member of the legal group working with the Taiwan Alliance to Promote Civil Partnership Rights, described Tseng's proposal as "racist" as it was discriminatory and was a waste of social resources. Pan said that Tseng's usage of family and blood ties as reasons to not allow same-sex couples the right to marry under civil law was discriminatory and no different from racism, reported CNA.

Though Lai and Kolas said that they respect the result of the referendum and will not amend the Civil Code, Judicial Yuan Secretary-General Lu Tai-lang (呂太郎) yesterday said that the referendums do not have legal precedence over the court’s interpretation no. 748 (prohibition of same-sex exclusive partnerships violates the constitution). Lu said that is because the Constitutional Court's ruling is equal to that of the constitution itself, which holds the highest possible legal ranking.

Interpretation no. 748 holds that provisions that “to not allow two persons of the same sex to create a permanent union of intimate and exclusive nature for the purpose of living a common life” violate people’s right to equality and freedom of marriage under articles 7 and 22 of constitutional law. As was the case prior to the referendum, the Legislative Yuan must decide how to guarantee these rights and freedoms by amending the Civil Code or establishing a new law.

In response to the result of referendum No. 12, the government appears to be poised to establish a new law, rather than amend the Civil Code.