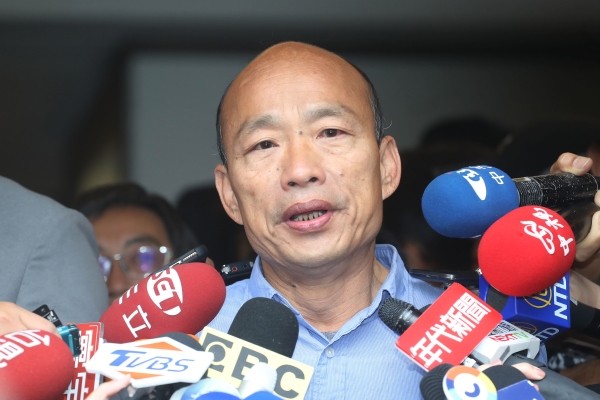 TAIPEI (Taiwan News) -- Though rumors had earlier swirled on social media in Taiwan that then Kuomintang (KMT) Kaohsiung mayoral candidate Han Kuo-yu (韓國瑜) had been convicted over a decade ago for killing a motorist in a car accident during the election, he did not confirm this until he had been elected, reported Next Magazine.

Last Friday (Nov. 23), one day before the election for Kaohsiung mayor was held, a rumor had spread through a group on the social media platform LINE that Han's Democratic Progressive Party (DPP) opponent Chen Chi-mai (陳其邁) was preparing to hold a press conference announcing that Han had been convicted for killing a motorist in a car accident. However, Chen's team denied the rumor and the press conference was never held.

In an interview with the media on Saturday night (Nov. 24), after Han had been declared the winner of the election, he finally confirmed that he had accidentally killed a person in a car accident over a decade ago. He said that in anticipation of his opponent's attacks or sudden surprise revelations, his team had made extensive preparations, but he was reluctant to expand on the details, only saying "everything depended on the court's decision."

Next Magazine uncovered the verdict in the case and released it to the public today. The accident occurred at 10:50 p.m. on January 3, 2004, when Han was driving his wife Lee Chia-fen (李佳芬) toward the intersection of Xiluo Xinshe Road and Xingnong West Road in Yunlin County's Xiluo Township, he failed to stop when the traffic light was flashing red. His car then sideswiped a heavy motorcycle speeding through the intersection at 90 kilometers per hour (well over the 50 kph limit) as the driver tried to beat a flashing yellow light.

Though Huang survived the accident relatively unscathed, Pai suffered severe injuries to his head and died after 8 days in intensive care due to intracranial hemorrhaging.

Although Huang had been speeding while trying to beat a yellow light and was driving without a license, because he had failed to stop for the flashing red light, Han was still sentenced to six months in prison for "negligent homicide" by the Yunlin District Court in October of 2006. He paid an undisclosed fine and was released with a two year suspended sentence, but it is unclear whether he served any part of the six month prison sentence.

To investigate the truth behind the incident, Next Magazine contacted the deceased man's family. Pai's mother said the day of the accident was a wedding banquet for her daughter. The whole family had traveled from Chiayi to Xiluo to celebrate the wedding, and her youngest son, Pai, and his cousin went to go to another gathering, where the cousin introduced Pai to Huang.

Pai's mother said, "This was the first time that Huang had met my son, no one expected what happened next." Pai's mother said that while Pai was in intensive care after the accident, Han never appeared, instead asking his wife and uncle to call. She said he expressed his willingness to visit, but she rejected his offer.

Pai's mother said that every time she was informed of a court hearing, her heart ached and she could not sleep at night. At first, Han's insurance company representatives were only willing to pay the minimum settlement amount and when the appraisal meeting was held, in order to refute the claim that her son had accidentally fallen to his death on his own, she even kneeled on the spot.

Finally, Han's parents-in-law met with Pai's mother, who showed them photos of the scene of the deadly accident. It was only when she told them that Pai had left behind a three-year-old daughter, and that she was going to have to raise her granddaughter to adulthood, that they offered to pay more on compensation.

In addition, after Han's father-in-law found out that Han did not give a customary white envelope at Pai's funeral, he gave one himself instead.

Pai's mother said that, after Han started appearing on TV during the frenzied buildup to the Kaohsiung mayoral election, she simply explained to Pai's daughter that her father's fatal crash involved Han. As for Han's win in the Kaohsiung mayoral race, she wished him well and said, "The past is over. I hope he can do well for the country and the people."

In response to the revelation, Han said through media consultant Pan Heng-hsu (潘恆旭), from the moment the injured man was sent to the hospital, Han felt great regret that he was not able to rescue the deceased motorcycle passenger, and it has caused a lifetime of pain and regret for himself and the family of the deceased.

Hsu Shu-Hua (許淑華), a spokesman for Han's campaign headquarters, told Newtalk that Han had paid an NT$4.5 million (US$146,000) settlement to Pai's family.

Han is scheduled to give a press conference on the matter today at 3:30 p.m.

Han dodged the question at the press conference, only saying that the incident was 15 years ago, had been perfectly handled, and he did not want to stir up the sad family matter from the past.