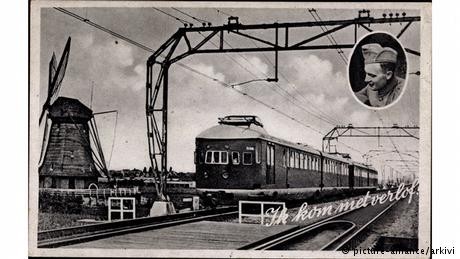 The Netherlands state-owned train company, Nederlandse Spoorwegen (NS), will compensate individuals whose Jewish relatives were deported on its trains to concentration and extermination camps when the country was under Nazi-German occupation during World War II.

Announced Tuesday on the nightly public television news show, the decision marks the first time that the train company will pay damages to individual descendants of Holocaust victims. Previously the NS had donated money to various remembrance projects.

"We have jointly decided … to found a committee," NS President Roger van Boxtel said. "This committee will find out how we can arrange financial aid to those affected."

The number of individuals to receive compensation, as well as the total to be paid out, remains unknown.

Millions made from transporting Jews

Following the occupation of the Netherland by Nazi troops in May 1940, the NS followed orders to deport Jews to the transit camp Westerbork. Around 107,000 Jews, including Anne Frank, were sent there before eventually being transported to other concentration and extermination camps, including Auschwitz and Sobibor.

The Nazis paid the state train company for transporting the Jews.

"The NS adhered to a German command to make trains available. The Germans paid for this and the NS had to make sure that the trains ran on time," Dirk Mulder of the Centre for Memory at Westerbork told national broadcaster NOS.

According to national broadcaster, the NS took in a rough profit of present-day €2.5 million ($2.8 million) under Nazi occupation for operating the trains.

The Dutch railway firm's decision to compensate descendants of deportees was the result of a confrontation between the train company and Salo Muller, a former physical therapist for the Ajax Amsterdam soccer club.

Both of Muller's parents were sent first to Westerbork and then to Auschwitz, where they were killed. He had argued that the NS profited from the transport of Jews and since 2017 has pushed for indiviudal compensation.

"For me, this [decision] means that the NS realizes that the suffering of many Jews has not ended," Muller said. "That's why I am happy the NS recognizes that it will be paid out for moral reasons."