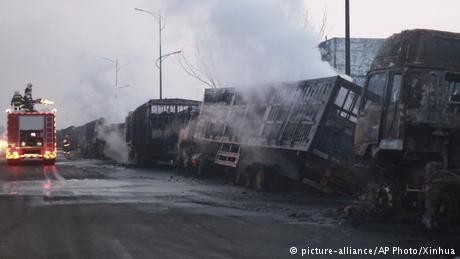 An explosion at a chemical plant on Wednesday killed 22 people and injured 22 others in the city of Zhangjiakou, which is set to host the 2022 Winter Olympic Games.

Public anger has grown in China following several deadly industrial accidents ranging from chemical plant blasts to mining disasters over the past decade.

For years, China has been rocked by industrial accidents caused by loose enforcement of safety standards. In 2015, a massive explosion at a site in Tianjin killed more than 170 people. The blast was traced back to improperly stored chemicals.

With authorities wary of social unrest, Beijing has vowed to improve industrial safety standards and increase oversight. But environmentalists say little has changed and workers are still at risk.

"Tragic accidents occur on an almost daily basis," said Greenpeace researcher Cheng Qian in a 2016 report. "The government must take urgent action to manage chemicals in a sound manner, provide a safety net for workers and citizens, and protect ecologically important areas across the country."

Read more: Is China on course with 'Made in China 2025' amid trade row with US?