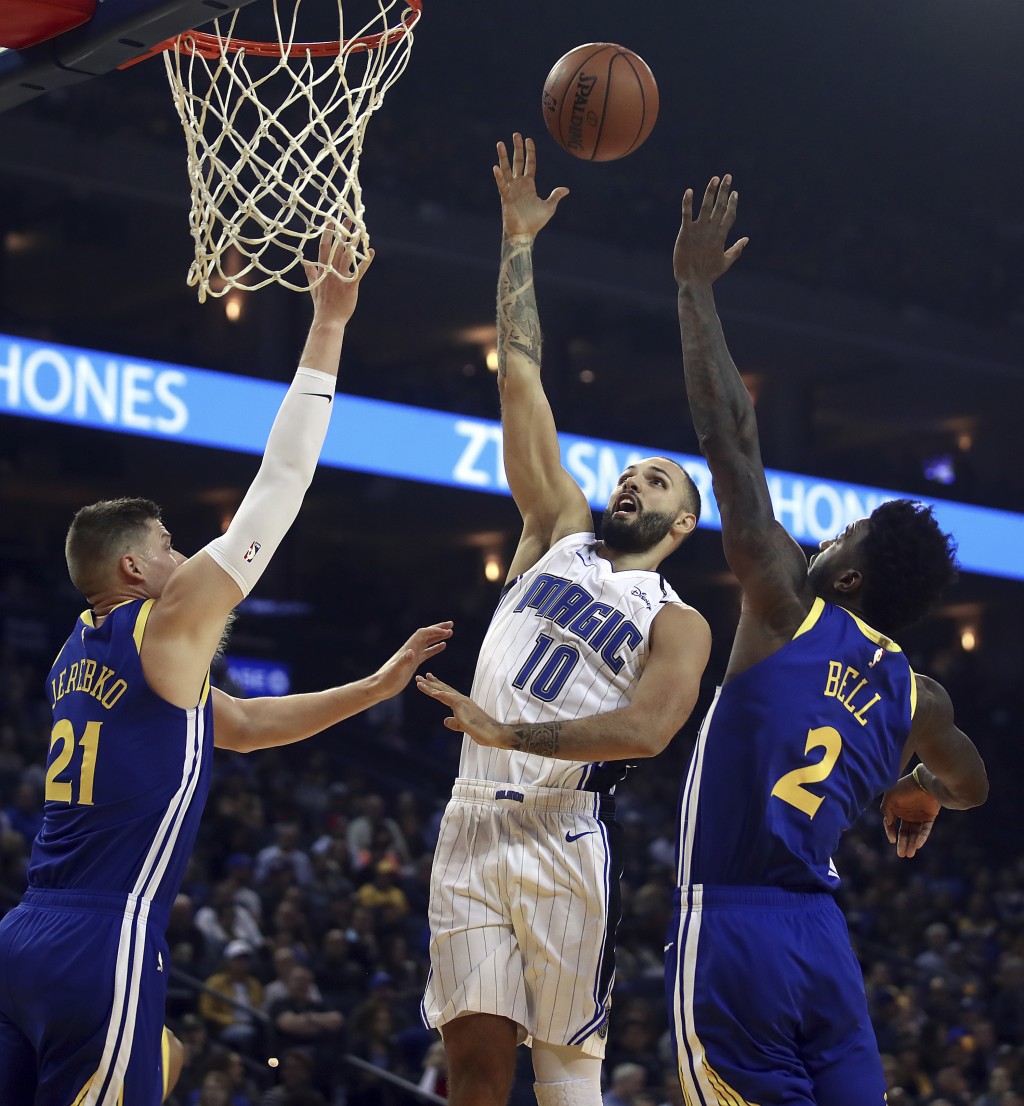 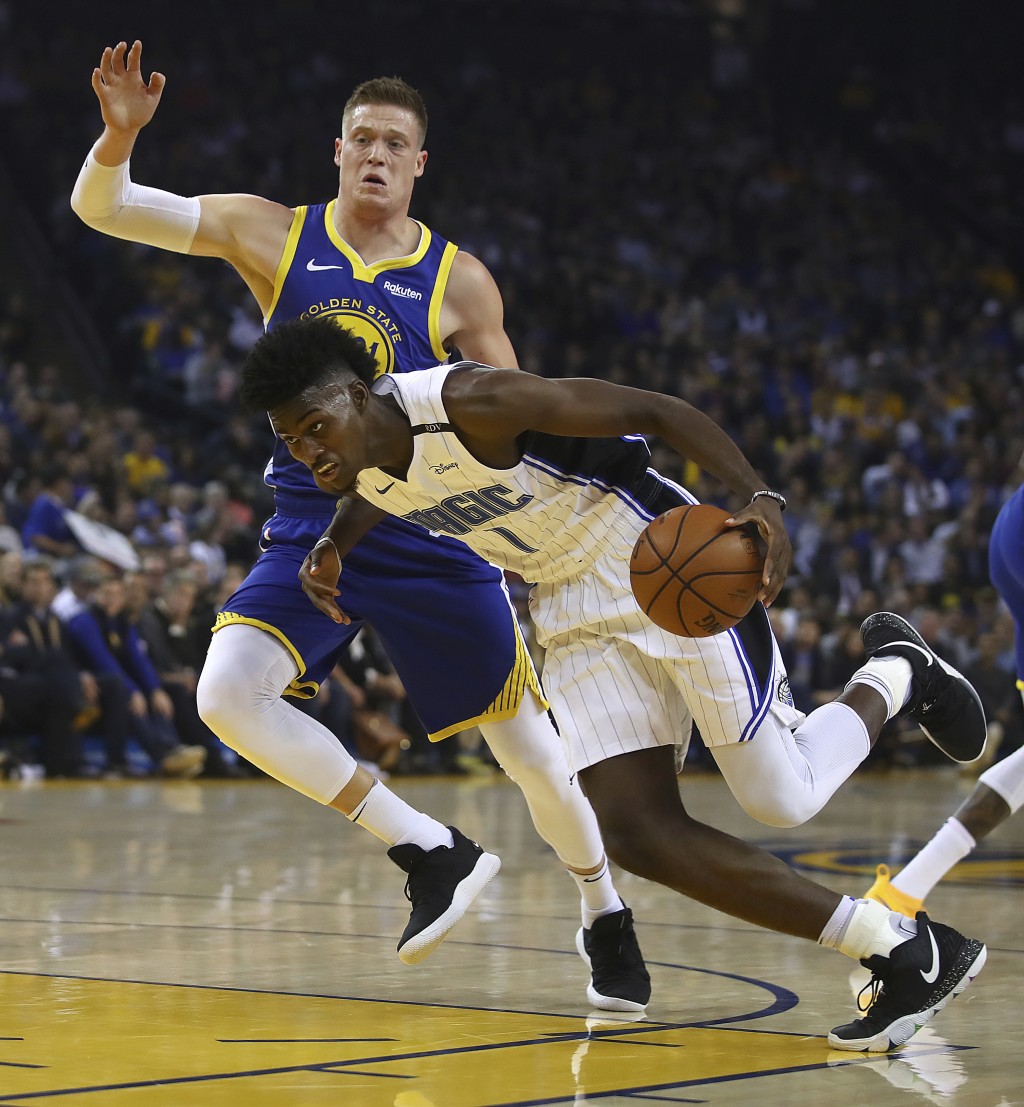 OAKLAND, Calif. (AP) — Kevin Durant scored a season-high 49 points, giving Golden State the lead on a three-point play with 1:19 left before hitting a 3-pointer with 22 seconds remaining to send the Warriors past the Orlando Magic, 116-110 on Monday night.

Durant topped his 44-point performance two nights earlier with another brilliant outing on both ends — and Klay Thompson was his scoring sidekick once more as the two-time defending NBA champions played without injured All-Stars Stephen Curry and Draymond Green.

Thompson hit his sixth 3 of the night to tie it with 1:45 left and finished with 29 points.

The past three games, Durant has scored 125 points and Thompson 91.

Nikola Vucevic had 30 points, 12 rebounds and six assists for the Magic, who coming off a victory over the Los Angeles Lakers on the road Sunday.

D.J. Augustin hit a go-ahead 3 with 2:31 left before Thompson connected.

Durant also had nine assists, six rebounds, two steals and two blocks, having taken his defense to another level the past week.

He and Thompson have carried the load as the Warriors won a third straight following a rare four-game losing streak.

Golden State closed the third on a 12-2 run to pull within 83-79 heading into the final 12 minutes. Mo Bamba's 3 with 10:35 to go gave the Magic an 88-79 lead before Thompson answered from deep the next two possessions.

Quinn Cook, starting in place of Curry, contributed eight points, six rebounds and four assists as Golden State concluded a four-game homestand over six days by beating the Magic for the 11th straight time — the Warriors' second-longest active streak against an opponent after 16 wins in a row against Phoenix.

The Warriors shot just 4 for 15 from 3-point range in the first half and fell behind 64-47 at the break. They hope two-time MVP Curry will return at some point during their upcoming five-game road trip. Curry missed his 11th straight game with a strained left groin, while Green sat out a sixth in a row and eighth in all with a sprained right toe.

Evan Fournier made four of his first six shots then missed his final eight for Orlando.

Curry scrimmaged Monday and is scheduled to go through a full practice Tuesday, making it possible he could play Thursday at Toronto.

Curry was hurt Nov. 8 against the Bucks trying to contest a shot in transition by Eric Bledsoe.

"Steph looked good today. Totally dominated the film crew," Kerr quipped. "They couldn't guard him. (Assistant) Willie Green put up a pretty good fight, but he's a couple of years past his prime."

Warriors: Durant is 29 of 30 from the free throw line the past two games. ... Golden State is 7-1 against the Eastern Conference this season. ... The Warriors won their sixth straight at home vs. Orlando. ... Green was limited to conditioning work Monday and rode the bike. He needs to be on the court a couple of times before Kerr is ready to put him back in a game. ... Key reserve Alfonzo McKinnie was sidelined a sixth consecutive game.

Magic: Continue their West Coast swing at Portland on Wednesday.

Warriors: At Raptors on Thursday trying for a ninth straight victory in the series and fifth in a row in Toronto.