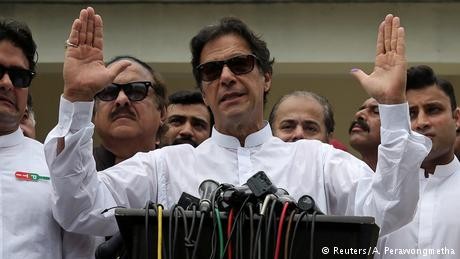 This is the third time in Pakistan's history when we are witnessing the executive authority of a political government fully aligned with the policy preferences of the permanent institutions of the state — the military and the superior judiciary.

The first instance was when, in 1971, Zulfikar Ali Bhutto of the Pakistan People's Party (PPP) became the head of the state and then the prime minister. He was preferred over the more popularly elected Sheikh Mujeeb-ur-Rehman, who had gained a decisive majority by sweeping the elections in the then East Pakistan, now Bangladesh.

The second such instance was in 1990, when Nawaz Sharif and his Pakistan Muslim League (PML-N) were pitched against the popularly elected Benazir Bhutto. Sharif became the prime minister after the powers that be cobbled together a coalition in his favor and manipulated the general elections called much ahead of the scheduled time.

In 2018, it was obvious that Imran Khan — the founder-leader of Pakistan Tehreek-e-Insaf (PTI, Movement for Justice) — was the most coveted choice for the prime ministerial slot by those dominating the power politics in Pakistan. His main adversary Nawaz Sharif had already been disqualified from running for elections by a court judgement.

In the first two cases — those of Bhutto and Sharif — it did not take them long before falling out with the same institutions that had facilitated their rise to power. Their failure owed partly to their own autocratic behavior toward their political opponents and mostly to the impatience with the political system displayed by the military generals of the times and their penchant for political interference. Although Sharif remained a part of the game when he played musical chairs of power with Benazir Bhutto in the 1990s, he was not fully trusted any further. Finally, during his third term (2013-2017), he was not only declared corrupt by the court but portrayed as a threat to strategic interests through a public campaign.

In the case of Imran Khan, there exists a chance for Pakistan being third time lucky. Khan himself said in a speech in September that he believes that there is no such thing as civil-military divide that exists in the country. One can only hope that this continues, because the wedge between the military and civilian politicians has not worked to Pakistan's benefit, be it for stabilizing the democratic process or for sustainably improving the economy.

However, what remains to be settled after Khan's government finishes its first hundred days in office is whether civilian supremacy over political matters, as enshrined in the constitution, is established by the politicians demonstrating more responsibility or Khan's government only proves to be the political face analogous to that of the Burma Socialist Programme Party (BSPP). Because if the curbs on media, constraints imposed on political dissent and muffling of critical voices continue unabated, people will begin to see it as Khan's own policy and his party as the Pakistani form of BSPP when it comes to the matters of freedom of expression and freedom of association.

Before coming to power, Khan primarily claimed to rectify what is wrong on the basis of a moral argument. Rooting out financial corruption was the key message, which to him was the main reason for an ailing economy and an inefficient, non-transparent and unaccountable system of governance. "Change" and "A New Pakistan" were the main slogans. However, in terms of governance, we observe that some key positions of authority in the government at the federal and provincial levels are held by old politicos who collaborated with the martial rule of General Pervez Musharraf, the turncoats from the political parties who Khan considers cheats and thieves, and the cronies of those shrewd old hands who remained Khan's financiers and form his cabal. From the transfers and postings of police officers on personal counts to appointing people as advisers whose only merit is being a friend to meeting the chairman of the National Accountability Bureau and asking him to expedite the cases against political adversaries, all this is neither being seen as just nor transparent governance.

When it comes to the handling of economy, the first hundred days show what is said ironically at times: the more it changes, the more it stays the same. Like all previous governments that shifted the blame to their predecessors but took more or less the same measures to fix the economy, the incumbent government solicited financial support through loans and deferment of payments for oil imports from countries like Saudi Arabia and China and sought a bailout package from the IMF.

Khan and his party were the fiercest critics of going to the IMF just on the eve of making it to power. However, what remains to be seen is that to what extent the reforms package that comes along with the concessional loaning facility of the IMF is implemented. And, whether the rich are made to bear the burden or it gets shifted to the struggling classes like in the past. Because some of those politicians with captive constituencies who had jumped on Khan's bandwagon a few months before the elections and made his win comfortable are the custodians of the old economic order.

In the meanwhile, the highest rise in prices of energy and subsequent inflation over his first hundred days has further marginalized the poor segments of the population.

Lacking a sense of history

As far as curbing corruption is concerned, something that the incumbent government has to learn to understand is that although this rhetoric was useful in the run-up to elections, the real issue of fixing the economy remains structural. Also, there is a catch here. Khan on his foreign trips continues to harp the old tune about massive corruption in society and government that he intends to fight. I as a foreign investor would think twice before investing in Pakistan. I will wait for the government to first implement its supposed reforms.

PTI is in power, not in the opposition. It is not about continuing to settle scores with local political adversaries even when you are abroad. After all, Pakistan is a developing economy which is not as bad it has always been projected. Khan lacks a sense of history but perhaps a sense of propriety is needed even more when he has become the prime minister.

Harris Khalique is a political analyst, columnist and poet. He is the author of "Crimson Papers: Reflections on the Struggle, Suffering, and Creativity in Pakistan," and has worked for a number of human rights organizations like Amnesty International and the Human Rights Commission of Pakistan.