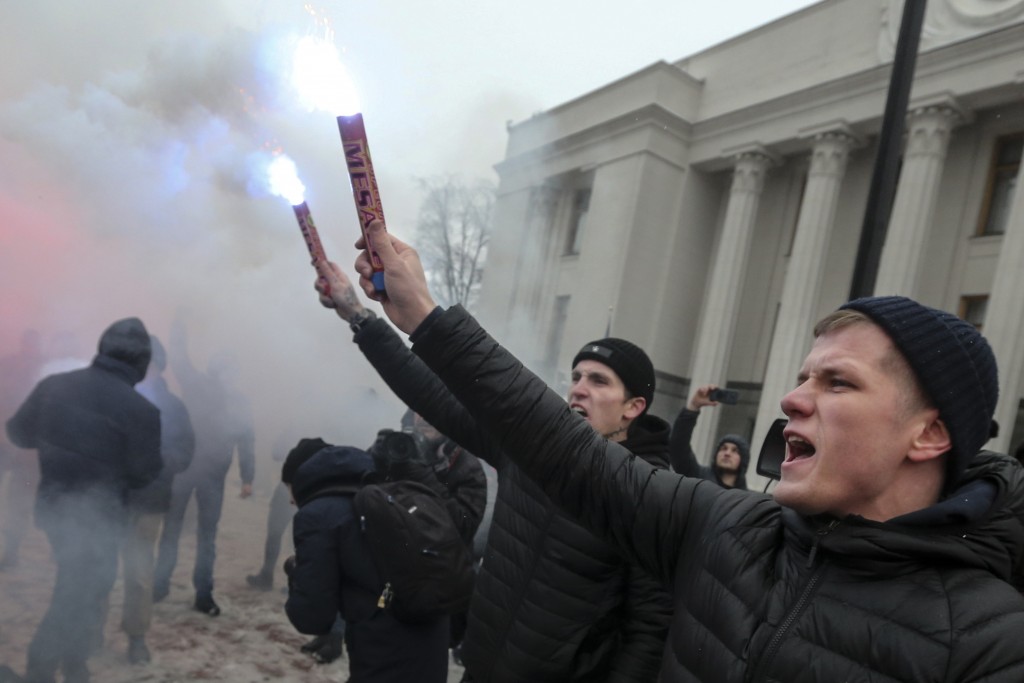 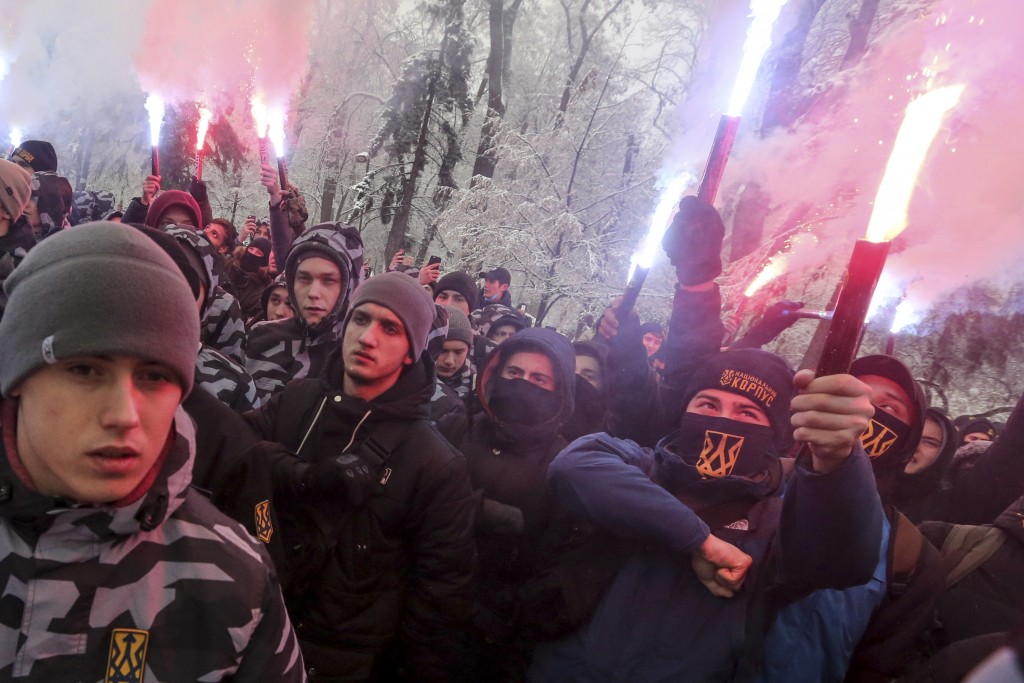 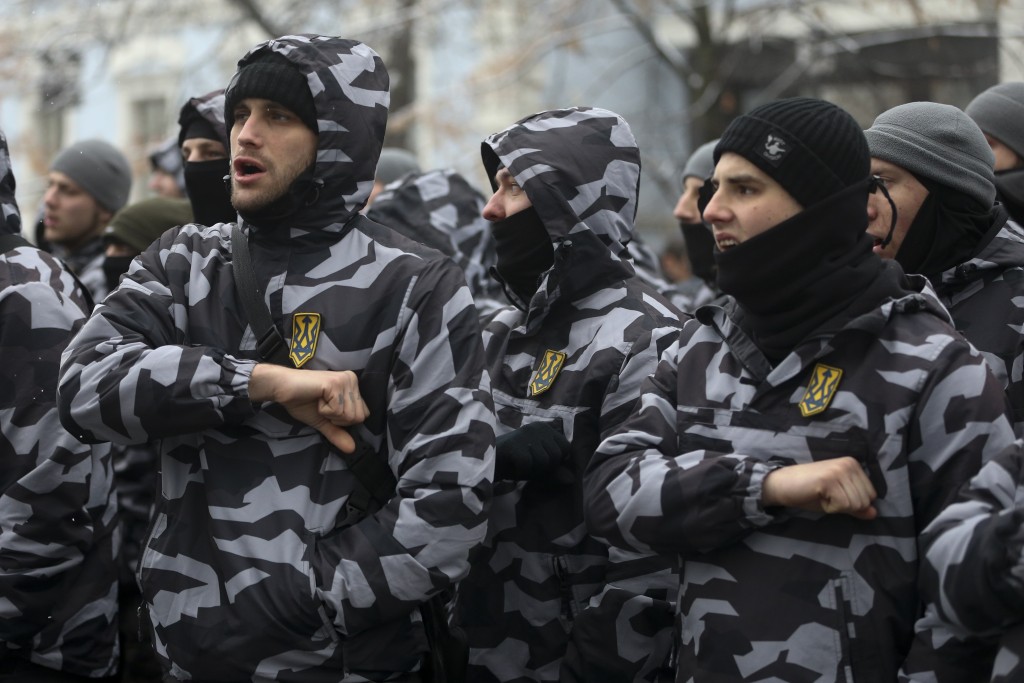 MOSCOW (AP) — Russian border guards opened fire on three Ukrainian vessels in the Kerch Strait near the Russia-occupied Crimean peninsula, raising the prospect of a full-scale military confrontation between the two neighbors. The incident comes on the back of a four-and-a-half year long proxy conflict in eastern Ukraine.

A look at the roots of the conflict and its possible developments:

Tensions have been rising in the Kerch Strait, which links the Sea of Azov and the Black Sea, for a few weeks now. Shortly after Ukraine detained a fishing vessel travelling from Crimea in March, Russia increased its military presence in the area and started inspecting all vessels traveling to or from Ukrainian ports, causing days-long delays and disrupting trade. Ukraine has protested the checks, calling them an "economic blockade." The European Union earlier this month expressed concern.

UKRAINE'S CHOICE: RUSSIA vs. THE WEST

The roots of the current conflict lie in autumn 2013 when the Ukrainian government was due to sign a deal supposed to open European Union markets for Ukrainian goods and put the country on a pathway to possible EU membership. That endangered Ukraine's ties with Russia, its closest neighbor and major trading partner.

The Kremlin vehemently opposed the deal, fearing an uncontrolled flow of goods through what was then virtually an open border. Despite his close ties to Russia, President Viktor Yanukovych publicly pledged to sign the deal — only to walk out on it at the last moment. Massive street protests followed, decrying Yanukovych for what was seen as an attempt to deny Ukrainians a European future. Riot police tried to disperse protesters, triggering clashes that saw 130 people killed in sniper fire. Yanukovych fled the capital to Crimea and was eventually whisked away by Russian special forces to southern Russia. An interim government, made up of the protest leaders, stepped in.

In February 2014, Russian officials began arriving in the Crimean peninsula shortly after the pro-Western government took power in Kiev, fanning fears of an onslaught on the Russian heritage in parts of Ukraine including Crimea. Troops without insignia soon appeared in Crimea, occupying crucial infrastructure including Ukrainian military bases. The Kremlin rejected reports that it had dispatched troops to the peninsula, and it was only years later that President Vladimir Putin publicly admitted that these were in fact Russian troops.

In spring 2014, Ukrainian troops largely did not put up resistance and retreated.

Would-be separatist commander and Russian officer Igor Girkin later recounted how he and other Russian officers forced the hand of local lawmakers to pass a motion calling for a referendum to secede and join Russia. An overwhelming majority of votes cast on March 16, 2014, supported the motion. Two days later, Moscow signed a declaration with self-proclaimed Crimean officials, sealing the annexation. Neither the vote nor the annexation was recognized by the United Nations.

Emboldened by the annexation of Crimea, local activists, propped by Russian operatives like Girkin, began taking over towns and villages in the east and taking down Ukrainian flags. Separatist leaders in the cities of Donetsk and Luhansk held contested votes in May 2014 supporting a motion to break away from Ukraine.

Sporadic outbursts of violence and clashes between Ukrainian troops and the separatists spilled over into a full-blown war in May 2014, when Ukraine launched an airstrike on Donetsk airport which was overrun by Russian Chechen fighters.

The conflict in eastern Ukraine has since killed more than 10,000 people and displaced over 1 million. Large swathes of this area remain under separatist control.

The Kremlin never admitted its role in the war, portraying it as a civil conflict. But overwhelming evidence suggests that Russia has been sending a sizeable number of troops and advisers as well as weapons to the rebels, helping to tip the conflict in their favor. Media including The Associated Press reported a massive stream of heavy weaponry and tanks crossing in from Russia.

Ukraine signed peace accords with the separatists in 2015, calling for a cease-fire and political settlement in the east. While it helped to decrease the intensity of fighting, the accords did nothing to resolve the region's political stalemate.

In the latest manifestation of Ukraine's resolve to break off with Russia once and for all, Kiev has stepped up its efforts to seek independence for its Orthodox church. The church in Ukraine has been tied to the Moscow Patriarchate for hundreds of years, although many parishes have split off over the past two decades to form schismatic churches. Calls for independence have increased since the conflict began.

The Istanbul-based patriarchate, whose head Bartholomew I is considered the "first among equals" of Orthodox church leaders, in October made the first step toward recognizing the independence of the Ukrainian Orthodox Church. The move was decried by the Russian Orthodox Church as well as the Kremlin.

While Sunday's incident — which some call the first overt military confrontation between Russia and Ukraine — raises the spectrum of a full-blown conflict, it is not likely that either side would want an all-out-confrontation. By opening fire on the Ukrainian vessels, Moscow reinforced its messaged that Crimea is Russian for good and that Moscow will not allow anyone to question that.

In Ukraine, President Petro Poroshenko is likely to benefit from the martial law that he is proposing to impose. Poroshenko's approval ratings have been in a free fall, and delaying the March presidential elections and playing up the Russian threat could help him get re-elected if the vote is held at a later date.