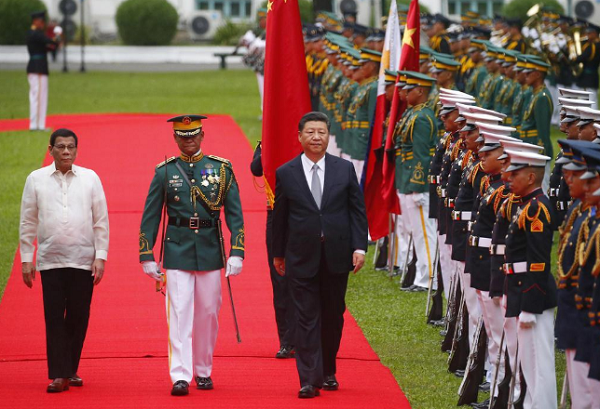 TAIPEI (Taiwan News) – A prominent member of the political opposition to the current administration in the Philippines declared that Philippine President Rodrigo Duterte is a “puppet” of the Chinese government.

Following a state visit from Xi Jinping to Manila on Nov. 20-21, Philippine Senator Leila de Lima on Nov. 26 accused Duterte of being the head of a fifth column in the Philippines, calling the Malacañang Presidential Palace China’s headquarters in the country.

De Lima has been detained in a state penitentiary since Feb. 24, 2017 on drug-related charges, which some international organizations have said are spurious and politically motivated. She is being held in the National Police Custodial Center in Camp Crame.

Sending messages from prison, she has been a consistent critic of Duterte’s strong-man politics, and his brutal drug-war. Delima, and many critics of the administration found these displays very concerning.

De Lima was quoted by the Inquirer as saying:

“Our Presidential Palace is now the headquarters of China’s fifth column in the Philippines. It is no longer a Filipino President that holds office there, but a Chinese puppet. We should no longer wonder why the Chinese flag flew high and mighty on that fateful day in Malacañang.”

De Lima claimed that Xi Jinping arrived in the Philippines as a “victorious conqueror” and said that Duterte “meekly followed” Chairman Xi as the Philippine honor guard flew the state flag of China.

During his visit, Chairman Xi reportedly expressed support for Duterte’s drug war, and pledged to increase cooperation in areas of law enforcement and combating terrorism.

China and the Philippines are also likely to inaugurate a cooperative prisoner swap program, allowing prisoners incarcerated abroad to serve their sentences in their home country, reports the Manila Bulletin.

During the state visit, the two governments signed a total of 29 memoranda of understanding (MoU), on everything from joint oil and gas ventures and education, to communications and technology, reports the Inquirer.

Critics of the Duterte’s increasingly close ties to Beijing expressed concern that some of the MoU’s will permit Beijing to intrude even further into Philippine territory in the West Philippine Sea.

The Presidential Palace has not released details of all the MoUs that were signed.

“The invader no longer needs to land its troops on our soil, when our own leaders are themselves the agents of the conqueror in our midst,” said the imprisoned Senator, calling the actions of the government “a traitorous sell-out of our sovereignty and national patrimony.”