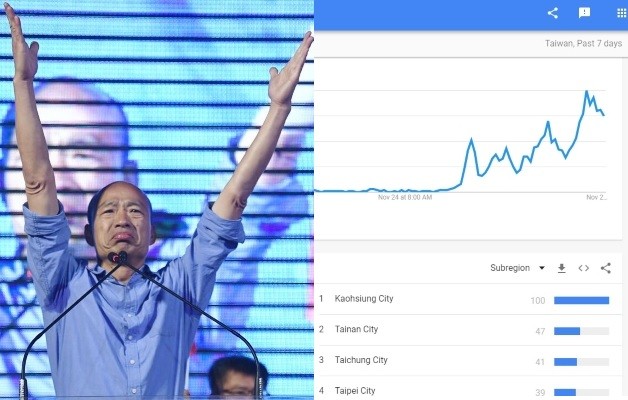 TAIPEI (Taiwan News) -- Taiwanese netizens are lamenting how poorly informed the electorate in Kaohsiung appears to be after Google searches for the Chinese Communist Party's mantra the "1992 consensus" spiked dramatically after Han Kuo-yu (韓國瑜) won his bid to be mayor of southern Taiwan's port city.

After his election win became official late Saturday night, Kuomintang (KMT) candidate Han told the media that night that he agreed with the "1992 consensus" and said that he would set up a cross-strait working group once he takes office. By 3 a.m. Sunday morning, Taiwanese netizens began frenetically searching for the term "1992 consensus" (九二共識) on Google, with IP addresses in Kaohsiung being the largest source by far.

When Taichung mayor-elect Lu Shiow-yen (盧秀燕), also of the KMT, was asked by reporters to respond to Han's statement about the "1992 consensus," she said that it can help the economy develop well. According to Google Trends data, the number of searches for the keyword "1992 consensus" soared in Taichung as well after her statement aired. Google searches for "1992 consensus" by city. (Screenshot from Google Trends)

In terms of cities and counties with the most searches for this term, Kaohsiung had the largest number of searches by far, followed by Taichung City, Taipei City, Tainan City, and New Taipei City. After news spread of the spike in Google searches for the term, many netizens began to question how well-informed the voters really were:

"So they didn't know what the 1992 consensus was, but they voted anyway?"

"This is kind of funny, not having any idea, but voting anyway."

"One must first understand before making a fortune."

Some netizens compared the situation to the United Kingdom European Union membership referendum held in 2016, after which major search terms on Google were "What is the EU," and "What is BREXIT." Searches for the term "1992 consensus" in the city of Kaohsiung. (Screenshot from Google Trends)

In a poll recently carried out by the Taiwan Cross-Strait Policy Association on 1,070 respondents, more than half agreed that Taiwan’s government should not accept the “1992 consensus.” The survey emphasized what most observers already know, which is that the “1992 consensus” is no consensus at all, much less a genuine political agreement with any legal basis, but is rather a rhetorical device and a historical fabrication.

Throughout the intervening years the term has become fossilized in the ideology underpinning the KMT's party platform as a symbolic expression of the KMT's historical ties to China, and wielded as a political cudgel to attack the DPP. Subsequently, Beijing took a cue from the KMT's criticisms of the Chen administration and the DPP, and seized on the "consensus agreement of 1992," transforming it further into a mantra for China's own cross-strait policy, refashioning the slogan into a "prerequisite" that must be "honored" before meaningful cross-strait dialogue can be achieved.

After President Tsai Ing-wen took office in 2016, she refused to recognize the "1992 Consensus," and in response, China has been seeking to punish Taiwan by excluding it from international organizations, stealing away diplomatic allies, and intimidating government bodies and corporations, such as airlines, to de-list Taiwan as a country.