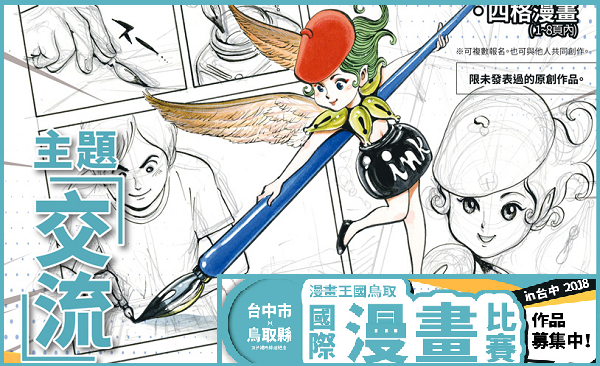 TAIPEI (Taiwan News) – The local government of a Japanese prefecture has launched a manga contest that is limited exclusively to Taiwanese artists.

The manga competition is the result of an agreement between Taichung City and the government of Tottori Prefecture, located in western Honshu, that was made earlier this month.

The plan for the contest was hatched after a friendship agreement between Taichung and Tottori's local government was made official on Nov. 2, when Prefectural Governor Shinji Hirai met with Taichung Mayor Lin Chia-Lung, reports the Japan News.

Tottori’s “Manga Kingdom Secretariat” which is responsible for managing the Taiwan manga contest, modeled it after an international competition they started in 2012.

In the 2012 competition, the top award went to a Taiwanese artist, who subsequently became a professional manga artist.

Tottori is hoping to drive up tourism from young Taiwanese travelers and boost international recognition for the prefecture by using the appeal of manga and anime. Taiwanese tourists who stayed in the prefecture last year numbered 16,510, the third highest after South Korea, and Hong Kong.

Japan News quotes Osamu Ebara, the head of Tottori’s Manga Kingdom Secretariat as saying “If we promote Tottori Prefecture to Taiwan using manga, it could be very effective in attracting more tourists.”

Currently there are 154 submissions by Taiwanese artists to the contest as of Nov. 25. The contest will accept entries through Jan. 10, 2019.

For more information check out the manga contest's official webpage (in Mandarin).