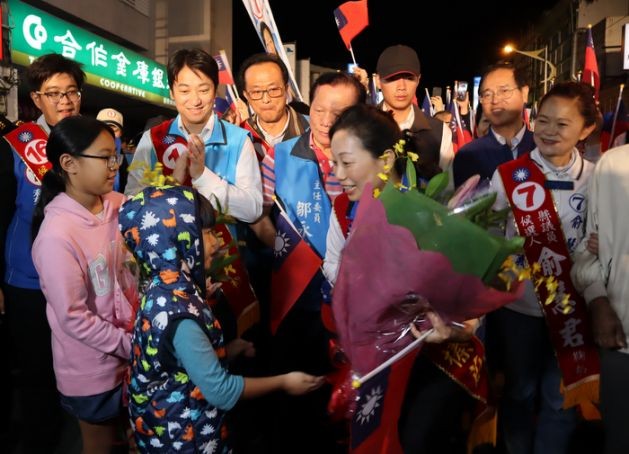 Hsu, who is one of seven successful female candidates fielded by the KMT in the mayoral and county magistrate races, is also the wife of the former Hualien County Magistrate, Fu Kun-chi (傅崐萁), who is currently imprisoned for insider trading.

Fu, who is an independent, but supported by the pan-blue camp, was sentenced to eight months in prison on Sept. 28, for violating the Securities and Exchange Act (證券交易法).

Hsu is well known to voters in Hualien, and since 2009 has been known as “Fu Kun-chi’s wife,” reports LTN.

According to reports, Hsu previously filed a divorce from Fu; however, the Ministry of the Interior revoked the filing before proceedings could begin.

Before Fu was incarcerated, on Sept. 25 the couple shared a dramatic good-bye with the national media, tightly embracing and shedding tears for their separation. Fu was first indicted in 2003 when he was part of the People First Party. The charges stem from market manipulations and illegal trading in the stock of the Hold-Key Electric Wire & Cable Co. (合機電線電纜公司).

The lawsuit dragged on for 14 years, with Fu first elected to the position of Hualien County Magistrate in 2009.

His wife, Hsu Chen-wei, who is a KMT party member previously ran for the office in 2014, facing off against her husband and four other candidates, but only receiving 3.4 percent of the vote.

When it became apparent that Fu was likely to face conviction and jail time earlier this year, his wife was ready to step in and capitalize on her husband’s network for support in her campaign.

According to Liberty Times, Fu had been grooming his wife to take the reins of government in the county for many years, with Hsu appointed to chair the Hualien China Youth Corps (救國團花蓮團) under Fu’s first administration.

She was later appointed as Captain of the Hualien’s Community Patrol (花蓮縣巡守) and. under the Ma administration, she became head of the National Women’s League (婦女後援會).

According to reports, it was known within KMT circles since 2016 that Hsu was planning to run for the office of County Magistrate.

Hsu defeated her main DPP opponent Liuh Siao-Mei (劉曉玫) with 71.52 percent of the vote according to Taiwan’s Central Election Commission.