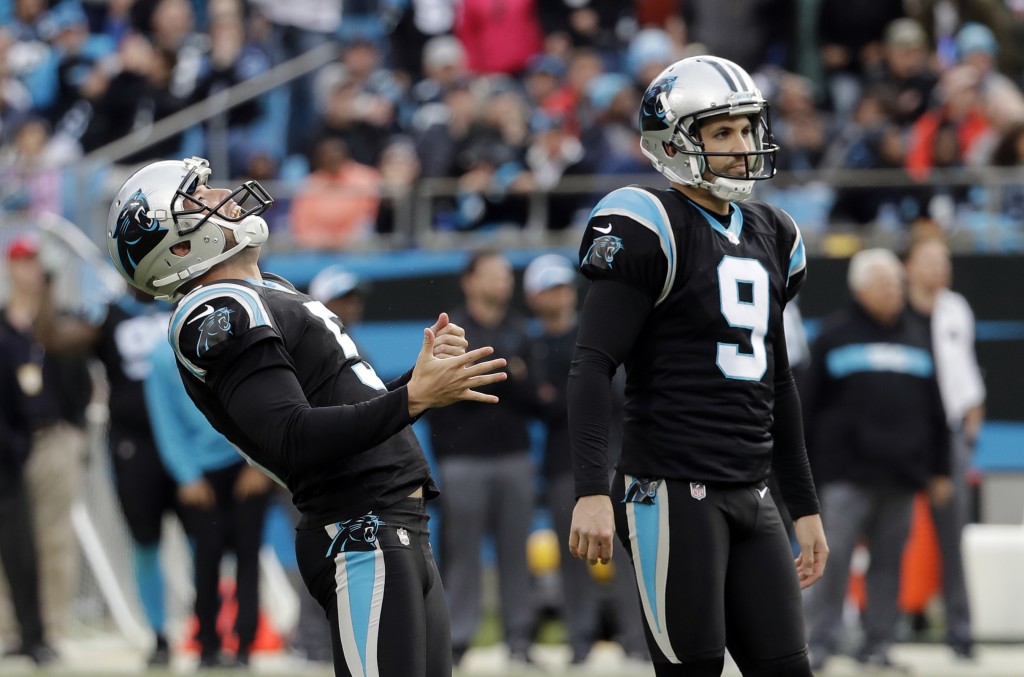 CHARLOTTE, N.C. (AP) — Cam Newton sat at his locker for several minutes after Sunday's game, his elbows resting on his knees and his hands cupped firmly around the back of his head while staring motionless at the floor.

The 2015 MVP couldn't believe how the Panthers had managed to lose their third straight game, 30-27 to the Seattle Seahawks — despite playing so well offensively for the majority of the game.

"Three weeks ago if somebody had said this was going to happen I would have slapped them," Newton said later. "But things happen and nobody is going to feel sorry for us. We are just opening up a lot of hope for a lot of other teams, and we can't allow that to happen."

But the Panthers already have.

Entering Sunday night's game between Minnesota and Green Bay, the Panthers were on the outside looking in at the NFC playoff picture. With five games remaining, they trailed the Vikings, Redskins and Seahawks in the hunt for the two wild card spots.

All of that would have been hard to imagine three weeks ago for the Panthers, who were 6-2 after a 42-28 win over Tampa Bay on Nov. 4.

Cracks in the armor began to surface on a Thursday night in Pittsburgh when the Steelers clobbered the Panthers 52-21.

Carolina followed that up with a 20-19 stinker on the road in Detroit when coach Ron Rivera unsuccessfully opted to go for 2 in the final seconds of regulation. On Sunday, the Panthers led the Seahawks 27-20 with less than seven minutes remaining after Newton connected on a 2-yard touchdown pass to Christian McCaffrey.

But a stalled late-game drive, a missed 52-yard field goal by Graham Gano and a defensive breakdown in the secondary set the stage for Seattle's comeback, which ended Carolina's 10-game home winning streak.

Carolina has a chance to right itself the next two weeks at Tampa Bay and Cleveland, but it closes the season with two games against division leader New Orleans (10-1), which has looked nearly unstoppable on offense, and one game against Atlanta, a team it lost to earlier this season on the road.

Carolina lost its season-worst third straight on a day when the offense played as well as it has all season.

Christian McCaffrey ran 17 times for 125 yards and a touchdown and caught 11 passes for 112 yards and another score to set a franchise record for total yards from scrimmage. He also became the first Carolina player ever to have 100 yards receiving and 100 yards rushing in a game as the Panthers piled up 476 yards.

Newton was solid, completing 25 of 30 passes for 256 yards and two touchdowns and running for 63 yards on eight carries. But two mistakes deep in Seattle territory loomed large. He threw an interception in the end zone and failed to pick up a first down on a fourth-and-2 run near the goal line early in the game.

"I think we have playmakers all over the field and a lot of guys did an awesome job today," McCaffrey said. "It's just a matter of finding a way to finish. We played fast and we stayed focused and at the end of the game. We've got to find a way to win. That's what the great teams do."

Carolina's defense has been leaky.

Defensive coordinator Eric Washington's unit has allowed 102 points over the past three weeks while surrendering an average of 387.6 yards per game. They've registered four sacks during that span and forced just two turnovers.

For a unit that includes a future Hall of Famer in Julius Peppers alongside Luke Kuechly, Thomas Davis and Kawann Short, those are tough numbers to swallow.

It didn't help that the Panthers lost starting cornerback Donte Jackson on the first play from scrimmage to a quad injury and turned to Captain Munnerlyn and Corn Elder. Both allowed big pass plays in the fourth quarter.

Rivera's message to the team was to "stick together" and Peppers agreed.