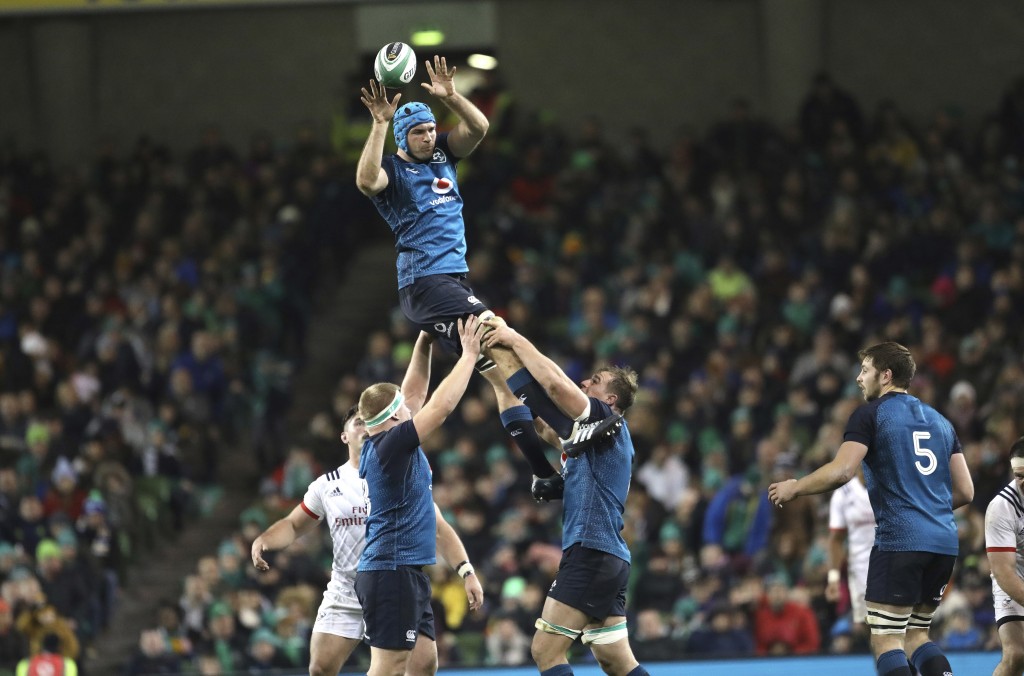 MONACO (AP) — Ireland flyhalf Johnny Sexton was named World Rugby Player of the Year at a glittering ceremony in Monaco on Sunday, leading a sweep of the major awards by an Ireland team which has swept all before it this season.

Coach Joe Schmidt, widely acclaimed as the architect of Ireland's rise over the last five years to No. 2 on the world rankings, was named Coach of the Year and Ireland was named Team of the Year in recognition of its Six Nations Grand Slam and its historic home win this month over top-ranked New Zealand.

"It's been an incredible year for us," Ireland captain Rory Best said. "I think the Grand Slam was enormous.

"I think to win it at Twickenham, which is an unbelievably tough place to go with all the pressure that is around, made the Grand Slam the highlight of the year."

Best dismissed suggestions that Ireland's 16-9 win over New Zealand in Dublin two weeks ago had made it favorite to win the World Cup in Japan next year.

"I think favorites and underdogs is a tag that is thrown around in the media more than among the teams," he said. "When you get to the top level, and when you look at the World Cup, you see teams like New Zealand which we were obviously thrilled to beat this month.

"They have been No. 1 in the world for nine years now and they are obviously a fantastic outfit. They are going to be tough to beat at the World Cup but I think below that there are a number of teams that will say that they have a real chance of going to the World Cup and winning it.

"I think for Ireland to be in that lucky position is phenomenal."

Sexton was a key member of the Ireland team as the pivot between its powerful forward pack and increasingly effective backline, forming a potent partnership in the halves with scrumhalf Conor Murray.

He became the second Ireland player to win the award after hooker Keith Wood who received the inaugural award in 2001. His rivals for the award were scrumhalf Faf de Klerk and hooker Malcolm Marx of South Africa, and winger Rieko Ioane and flyhalf Beauden Barrett of New Zealand. Barrett was attempting to win the award for the third straight year.

Best was called back to the stage to speak on behalf of Sexton who had lost his voice because of a throat infection.

Reading from notes provided by Sexton, Best said: "I'm not sure if you can understand me any better but Johnny has put a few things down here that I will read out.

"Apologies for my throat infection ... lost my voice. Thank you to my teammates and coaches. When a No. 10 wins an award like this it is due to the team around him and his coaches who make his job easier. We have some of the best coaches in the world and are led superbly by ... me (Best) ... and Pete (O'Mahony).

"Thank you so much. It is an incredible honor. I look at the other nominees and admire all of them. Any of them would have been a worthy winner."

France fullback Jessy Tremouliere was named Women's Player of the Year at the end of a season in which France won the Women's Six Nations Grand Slam and beat No. 1-ranked New Zealand for the first time. The other nominees were her France teammates Pauline Bourdon and Gaelle Hermet and New Zealand's Fiao'o Faamausili.

Springboks winner Aphiwe Dyanti was named Breakthrough Player of the Year and Australia's Angus Gardiner Referee of the Year.

All Blacks lock Brodie Retallick, a former Player of the Year, won the prize for the Try of the Year.