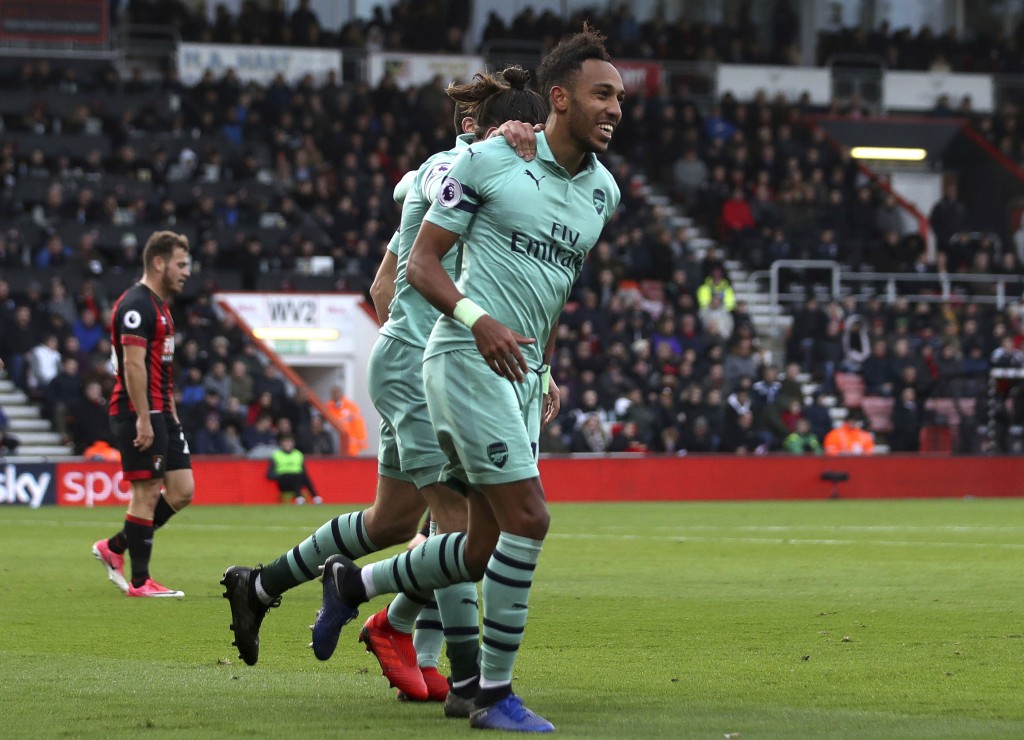 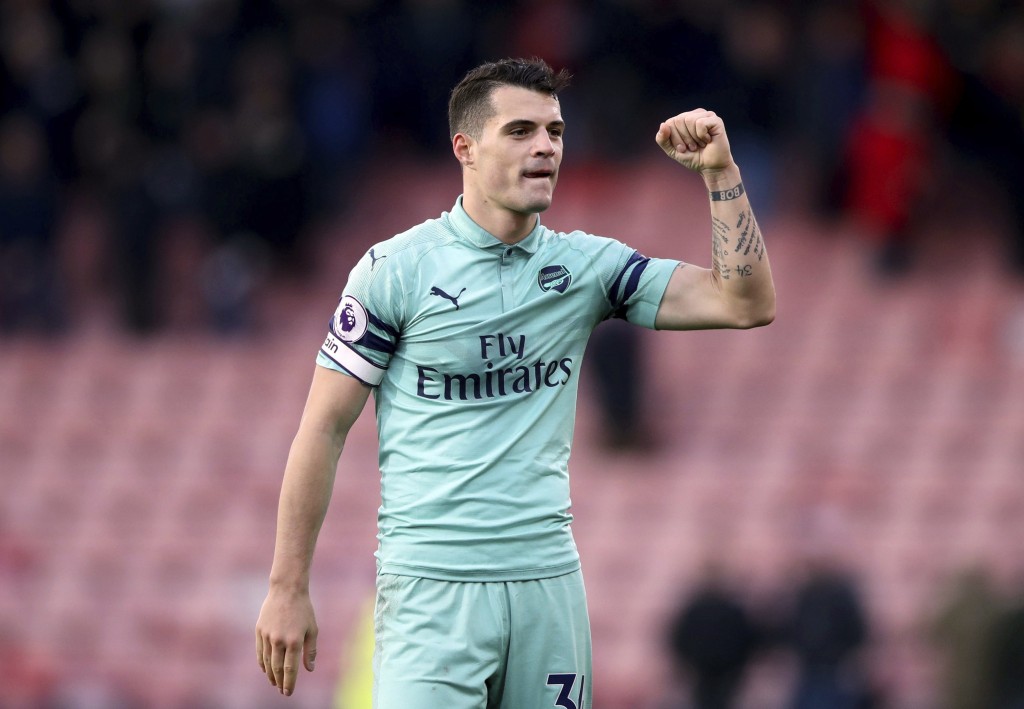 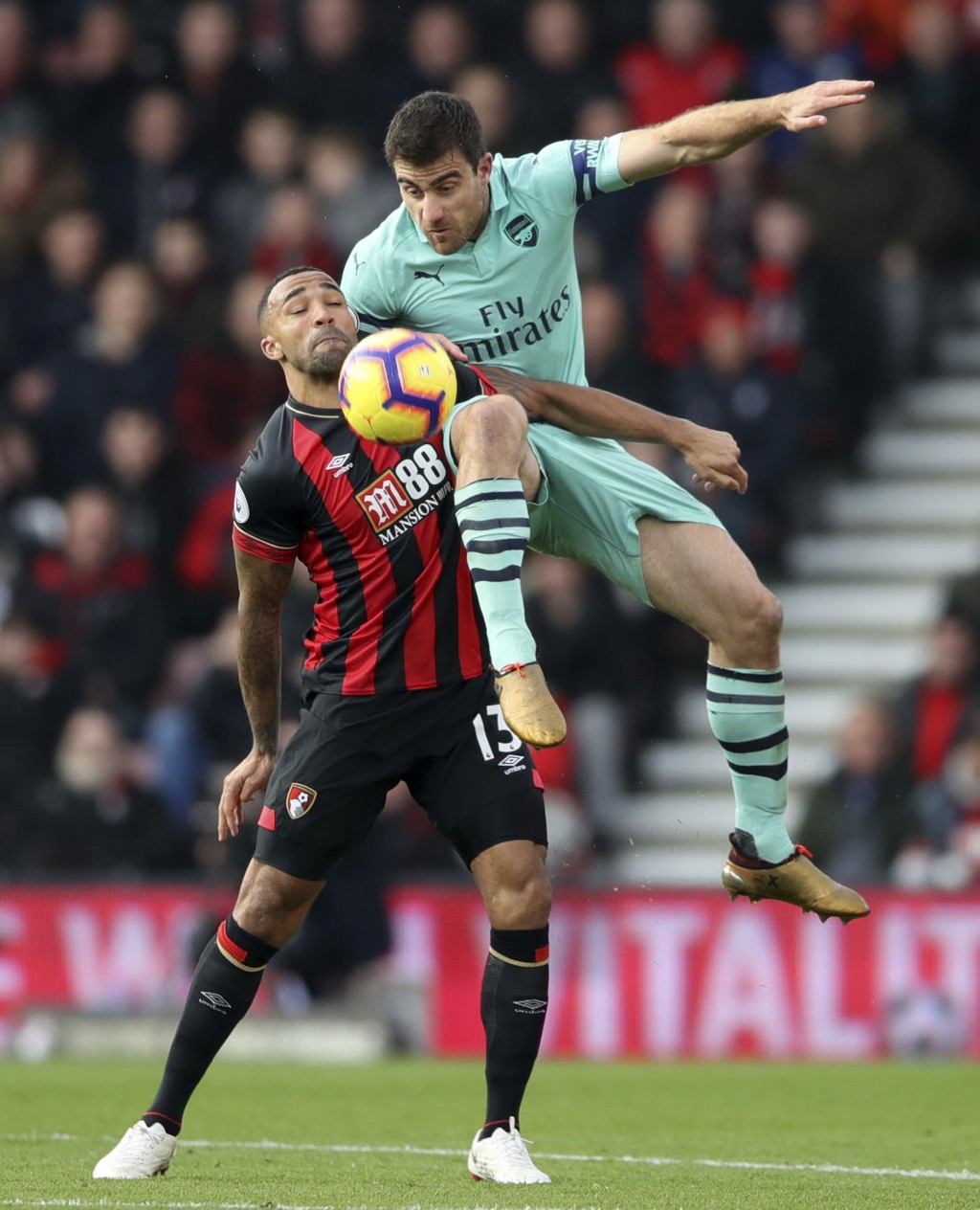 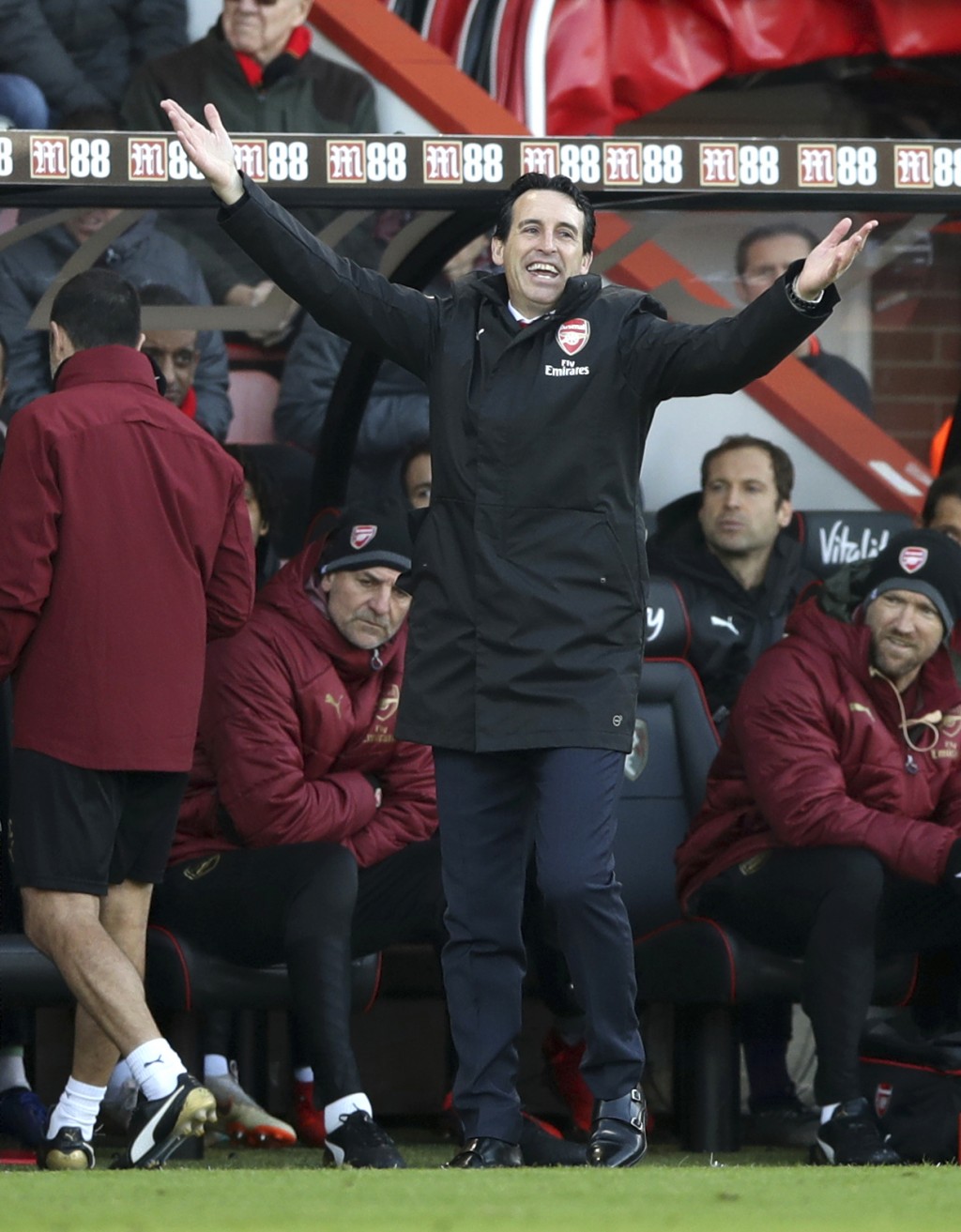 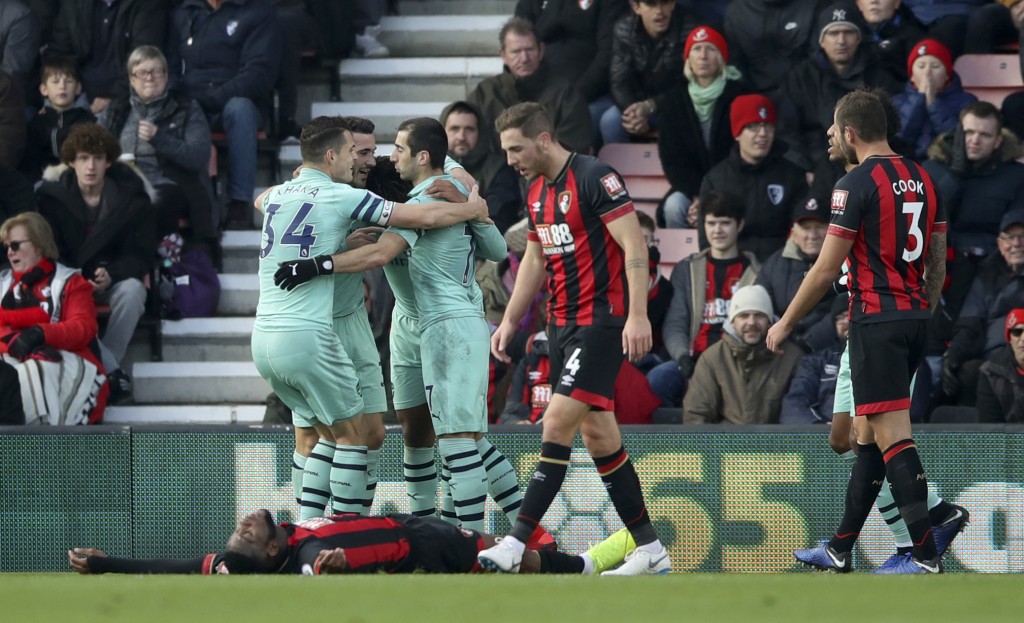 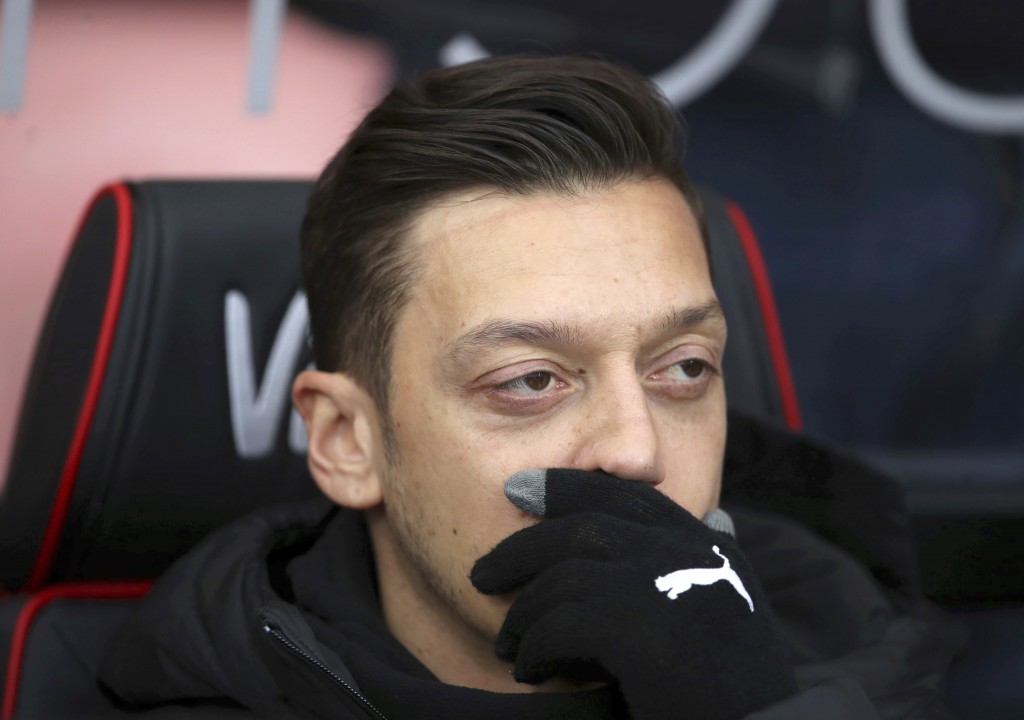 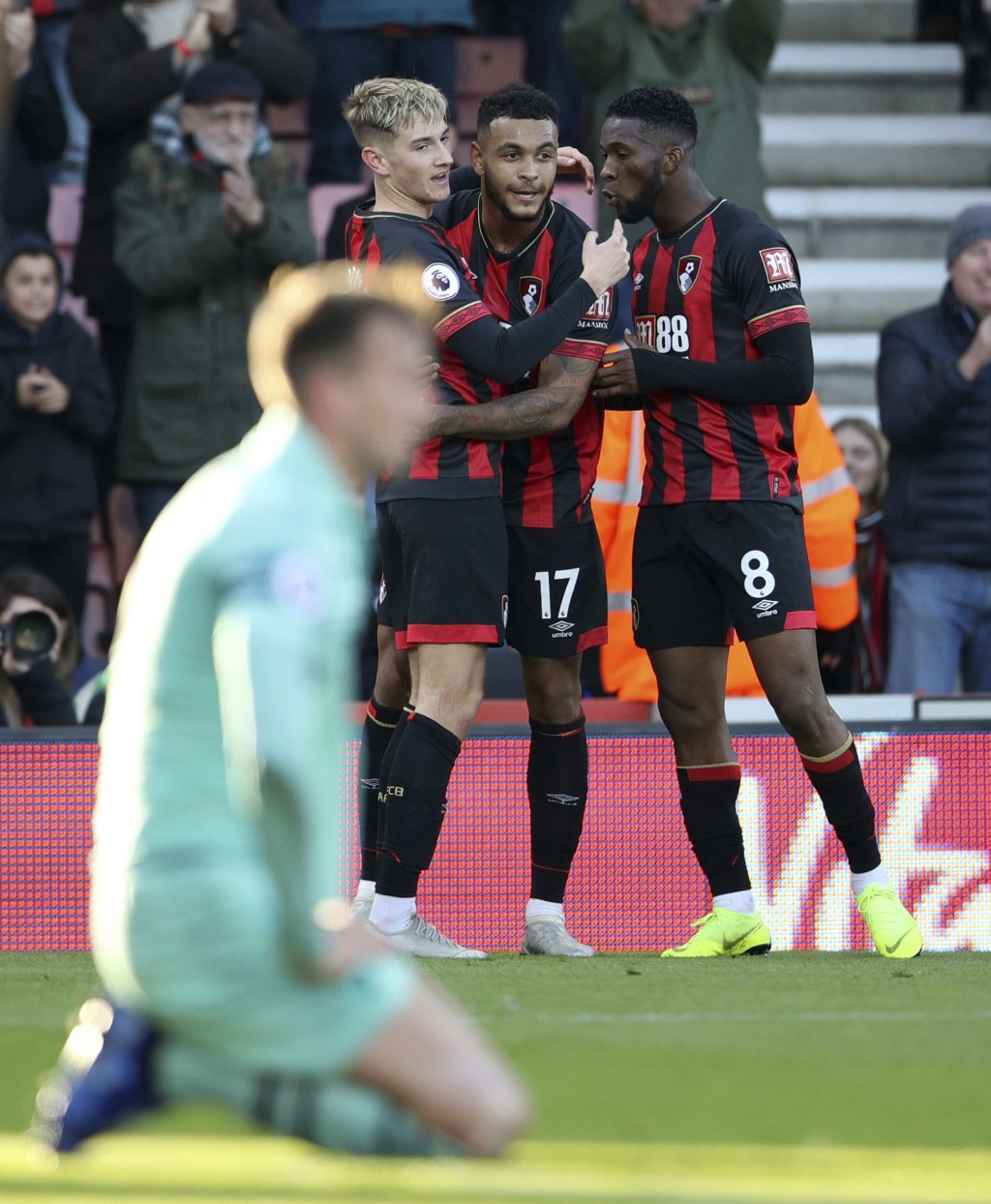 The Gunners had drawn their last three league games but Aubameyang's second-half strike was enough to extend their unbeaten run to 17 matches in all competitions.

Jefferson Lerma scored a remarkable volleyed own-goal to give the visitors the lead at the Vitality Stadium, with Joshua King levelling for Bournemouth before Aubameyang scored to seal a 2-1 victory.

Unai Emery sprung a tactical surprise by starting with a three-man defense and it paid off as Sead Kolasinac, playing as a wing-back, laid on both Arsenal goals as they moved to within a point of Chelsea in fourth place.

Alexandre Lacazette missed out with a tight groin, while the change in system meant Mesut Ozil was only among the Arsenal substitutes.

The hosts thought they were ahead early on but David Brooks was flagged offside as he slotted home King's through ball.

Arsenal went up the other end and Lucas Torreira rattled the foot of the post with an arrowed shot, with Alex Iwobi only able to lash the rebound high and wide.

Bournemouth was certainly the better team as the visitors struggled to adapt to a new formation, with Callum Wilson heading at Arsenal goalkeeper Bernd Leno as the Cherries continued to push for the opener.

King's pace was causing problems for the recalled Sokratis Papastathopoulos, who was shown a yellow card for hauling the Bournemouth man to the ground on the edge of the penalty box.

But it was Arsenal which took the lead with a half hour on the clock, Lerma accidentally turning Kolasinac's cross past Asmir Begovic with a finish any top Premier League striker would have been proud of.

Iwobi drew a smart stop out of Begovic as the visitors looked to double their advantage before the break — but instead Arsenal's run of not leading at halftime this season continued.

Cardiff is the only other top-flight side yet to hold a halftime lead in the league this season and King's smart finish with the last meaningful kick of the opening 45 minutes ensured Bournemouth went in level. Arsenal was again pushing for a second goal but, having lost possession in the Bournemouth box, a rapid counterattack ended with King converting past Leno.

Neither side could create anything of note at the start of the second half. The Arsenal fans began to call for the introduction of Ozil but were soon celebrating the lead as Aubameyang slid in to score from six yards in the 67th after another Kolasinac cross.

Lerma almost atoned for his own-goal but struck the same post as Torreira with a low drive before Leno had to be alert to push the ball behind after it looped toward goal off the foot of Sokratis.