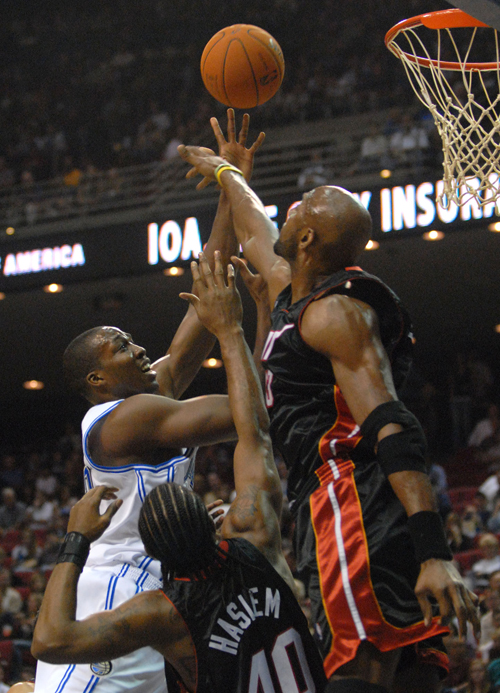 It didn't matter whether the Miami Heat couldn't find the basket with a GPS or whether their three starters (two of whom go by the handles of Shaq and D-Wade) were absent. Or if the evening's most entertaining performance was by "The Rappin' Granny" at halftime.
Go Granny, go Granny, go Granny, go.
Nothing was going to put a damper on the Orlando Magic's much-needed 97-68 victory against the Heat on Saturday night in front of a sellout crowd at Amway Arena.
Pride goeth before the fall out of the Southeast Division race.
The Magic will ring in the new year before their next game, having halted a four-game losing streak and a slump of nine losses in the past 12 games.
"We just wanted the win, however we could get it," Magic guard Keith Bogans said.
They got it, and it's a good thing for them. Losing to this shell of a Heat team - the defending champs resembled a summer-league outfit with all their injuries - could have continued to unravel their early-season handiwork.
The Magic (18-14) lost the outright lead to the Wizards with their narrow loss Friday night at Washington. They regained a virtual first-place tie in the division with the Wizards' loss to the Milwaukee Bucks on Saturday night.
The Heat (13-17) were missing starters Shaquille O'Neal, Dwyane Wade and Jason Williams and, not surprisingly, scored the fewest points in the 18-year-old series. The Magic were playing without starter Grant Hill (sore foot) and top reserve Keyon Dooling (strained Achilles). Advantage, Orlando's depth.
The Magic were charged by Coach Brian Hill to act like sharks in bloody water after tipoff. They attacked (shooting 33 free throws) unmercifully and throttled the Heat with a 21-10 second quarter to start the rout . . . and stop the slide.
"The first thing Coach (Brian Hill) said in the meeting (Saturday) was that we got to stop it right here," Magic center Dwight Howard said.
Howard led Orlando with 18 points and 10 rebounds, anchoring an impressive command in the paint: Magic 50, Heat 14. Reserve forward Trevor Ariza scored 16 points and grabbed 10 rebounds. Rookie guard J.J. Redick, activated because of injuries, scored a career-high nine points.
Heat center Alonzo Mourning's upper lip was particularly stiff after the Magic improved to 2-0 this season against Miami. "Teams are kicking us while we're down," 'Zo said. "I'm not going to forget it. . . . When we seen them again, we are going to have all our players, and then we will see what happens."
'Zo flashed his title ring and grinned, "They (the Magic) are trying to get what we already have. I know there will be different results."
Hopefully, it'll be a better game. This one was so bad that thank goodness 73-year-old Vivian Smallwood was in the house to entertain the Magic's 10th sellout crowd of the season. She's known as "The Rappin' Granny," a finalist on America's Got Talent.
n Utah rebounds from loss
At Salt Lake City, Mehmet Okur scored 20 points, Carlos Boozer added 19 points and 10 rebounds, and Utah beat Portland 96-86
Okur shot 9-of-13 and scored four points in a late 8-2 run that sealed the game for the Jazz. His runner in the lane gave Utah a 94-82 lead with 1:02 left in the game.
Boozer notched his 23rd double-double of the season and Andrei Kirilenko added 14 points for the Jazz, who have won three of four and rebounded from a 106-83 loss to San Antonio on Thursday.
In other NBA action: Charlotte 113, Indiana 102; New Jersey 100, Minnesota 92; Milwaukee 119, Washington 102; Dallas 94, New Orleans 80; Chicago 103, Cleveland 96; Memphis 110, Toronto 104; Sacramento 119, Golden State 96.