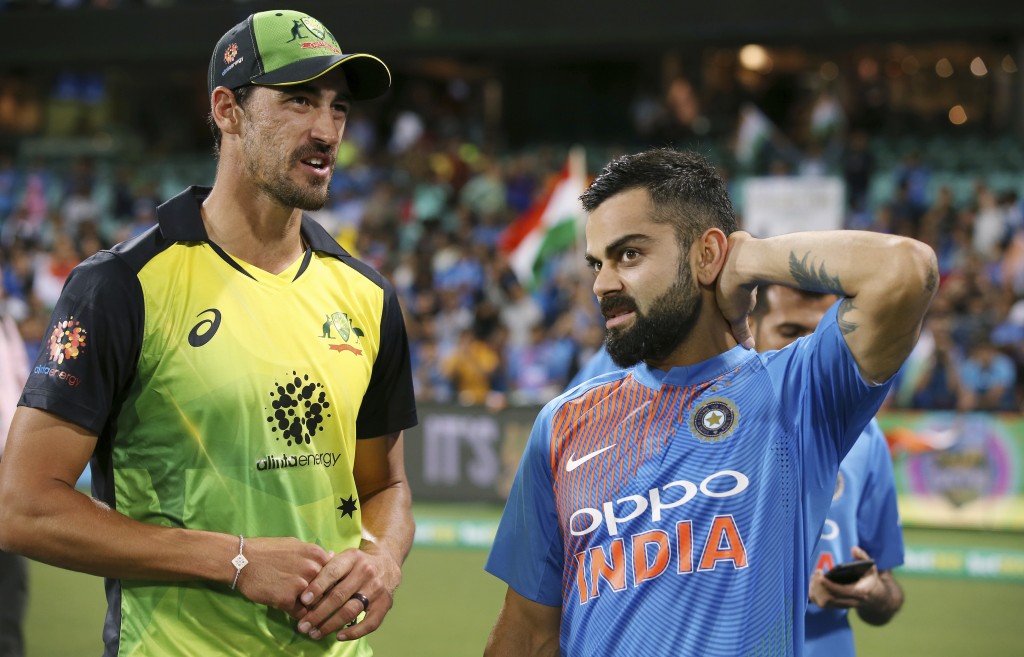 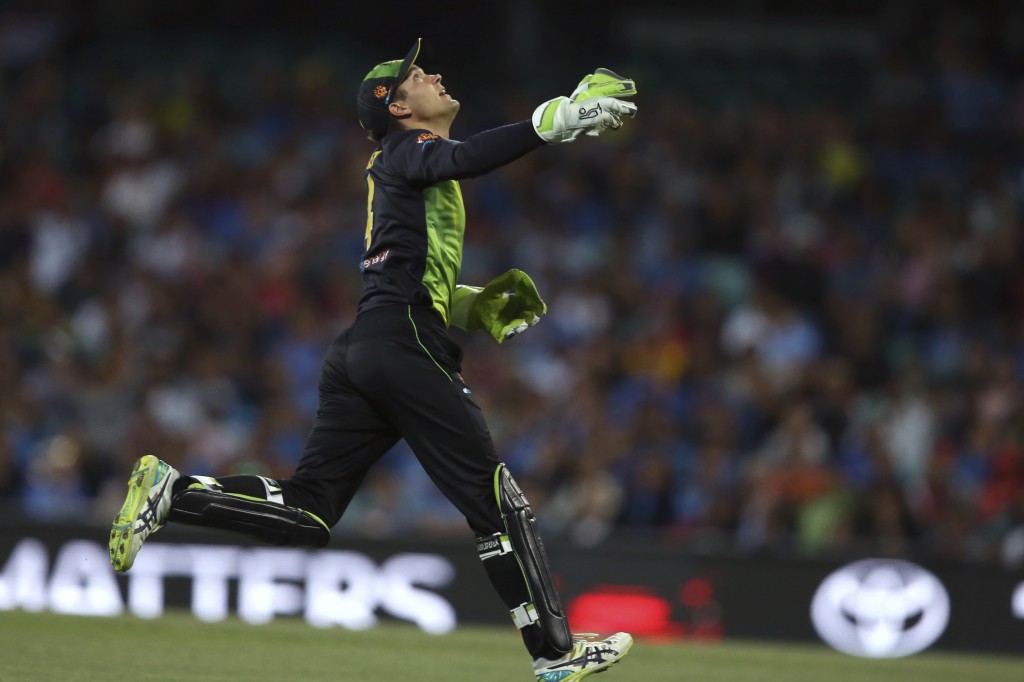 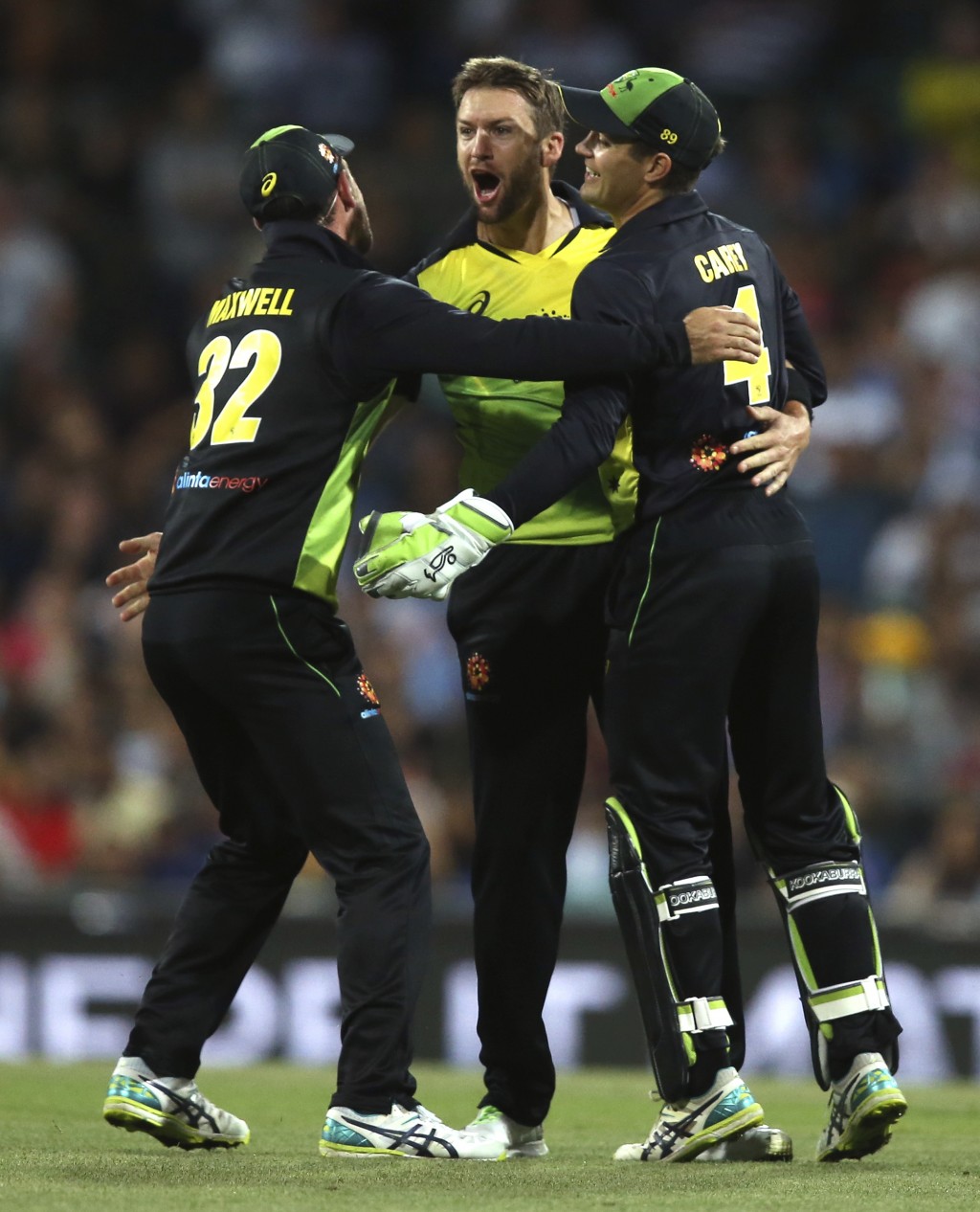 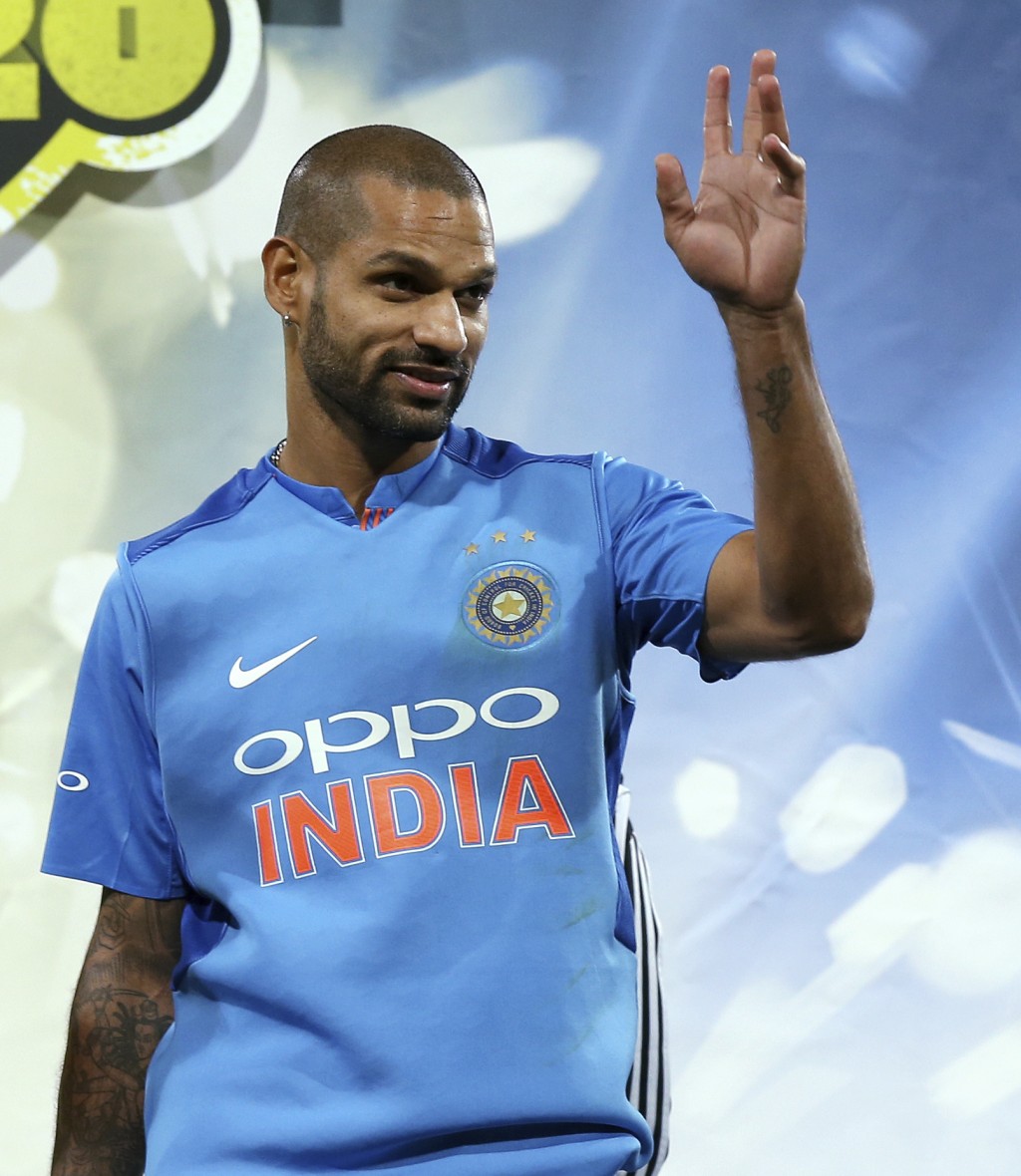 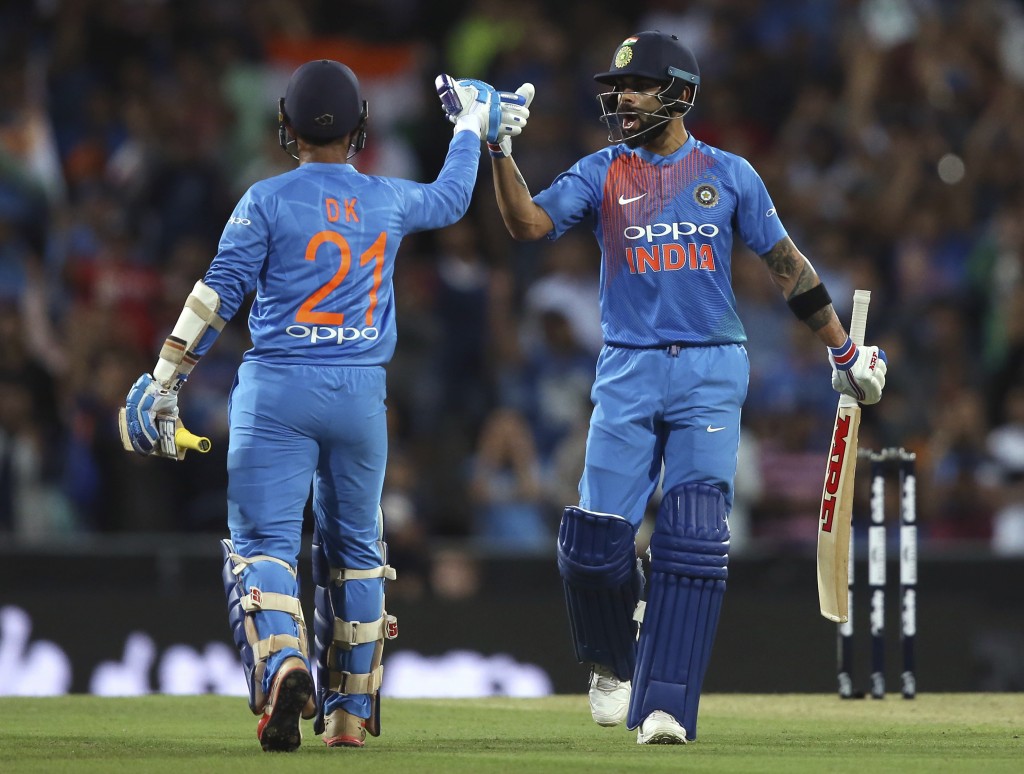 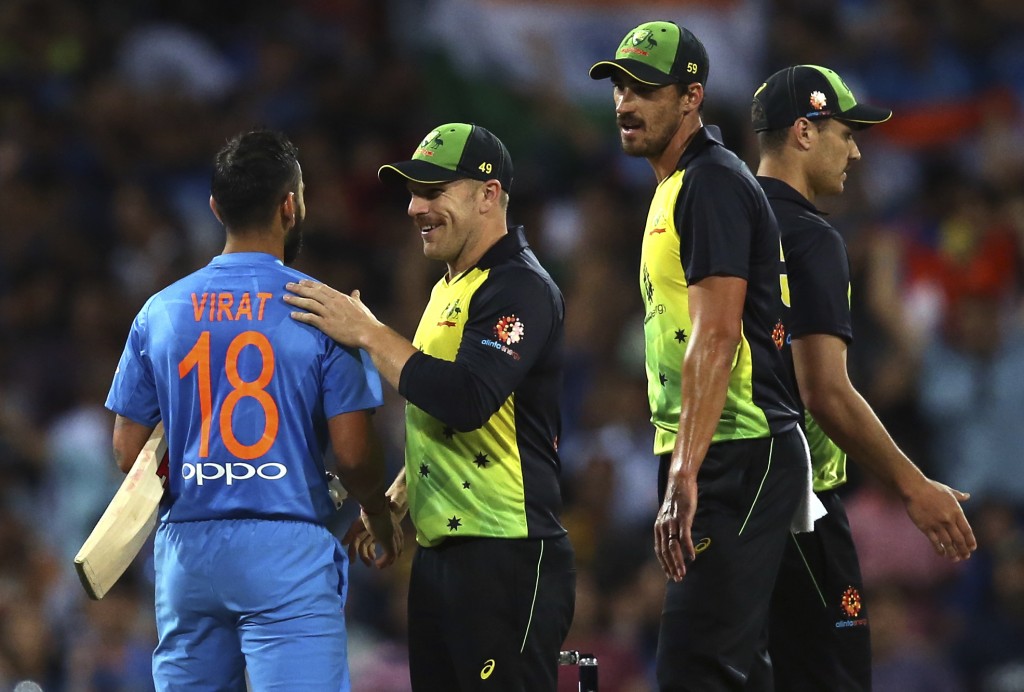 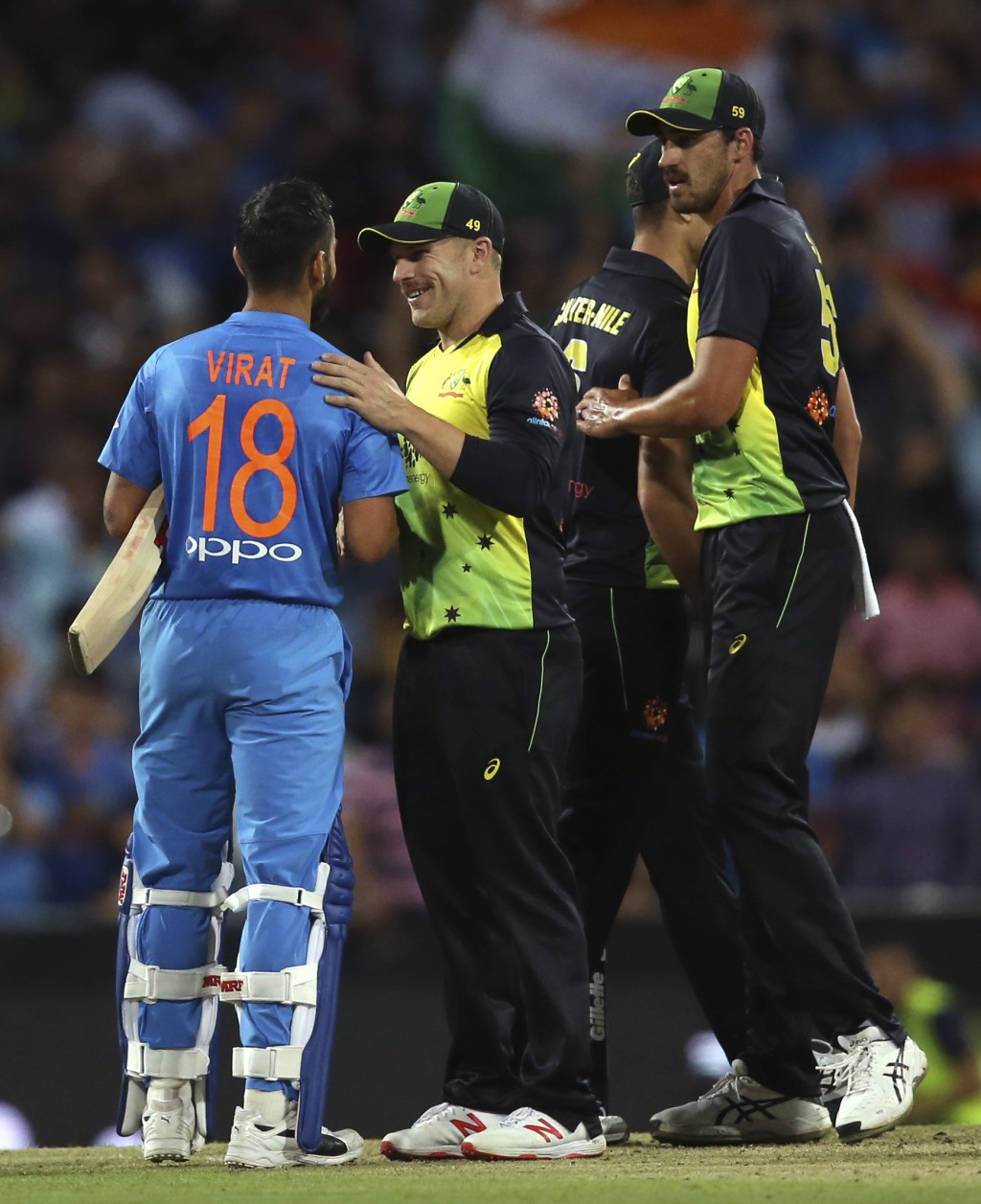 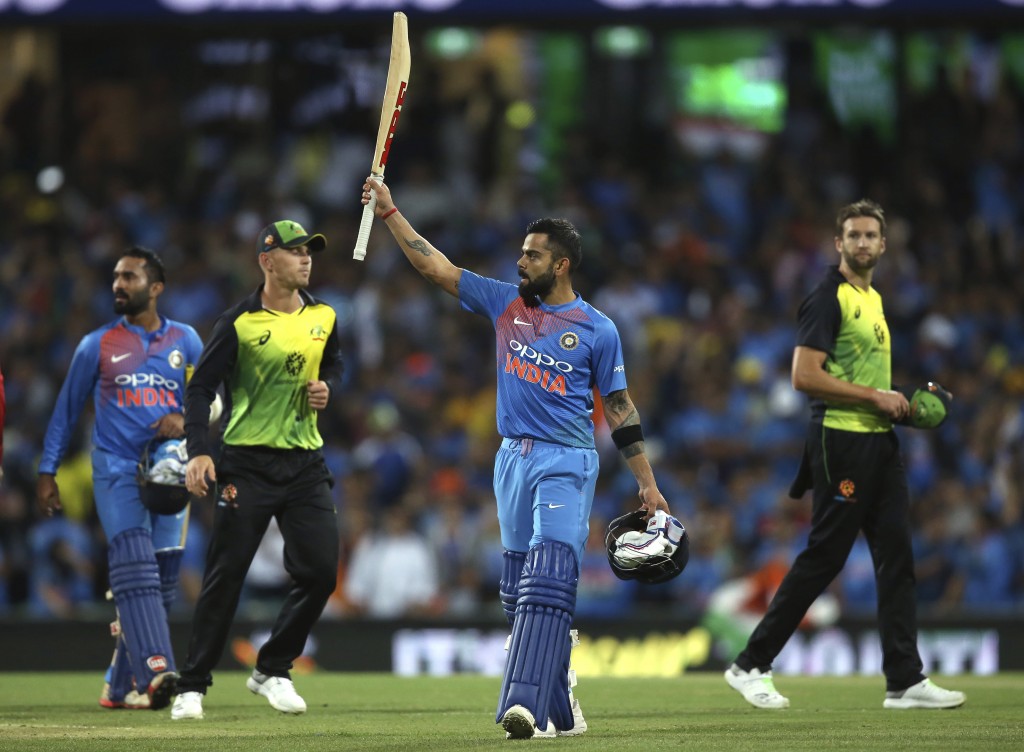 SYDNEY (AP) — Captain Virat Kohli made an unbeaten 61 to steer India to a six-wicket win over Australia in the third Twenty20 international on Sunday, tying the rain-affected three-match series at 1-1.

India produced significant partnerships at both ends of the innings to ease past Australia's competitive total of 164-6, reaching 168-4 with two balls to spare.

Shikhar Dhawan (41) and Rohit Sharma (23) put on 67 from 33 balls for the first wicket then, after Adam Zampa and A.J. Tye had helped Australia pull back the run-rate, Kohli closed out the match in an unbroken partnership of 60 from 39 balls with Dinesh Karthik (22 not out).

En-route, Kohil reached his 19th Twenty20 international half century from 35 balls, urged on by a capacity crowd at the Sydney Cricket Ground in which India fans overwhelmingly outnumbered Australians.

Australia won the first match of the series at Brisbane and the second at Melbourne was lost to rain, presenting the home side with the chance on Sunday to achieve its first ever T20 series win over India.

Captain Aaron Finch (28) and D'Arcy Short (33) set a sound platform for Australia, who elected to bat after winning the toss, putting on 68 for the first wicket. But after conceding 12 runs from his first over, left-armer Krunal Pandya fought back to take 4-36 — the best figures by a spinner in a T20 international in Australia — and Kuldeep Yadav took 1-19 as India's spinners dominated on a slow SCG pitch.

Kuldeep struck first, removing Finch to a catch by Pandya at backward square, and Australia's innings began to unravel. It lost three wickets for five runs in the space of five balls, including Short and Ben McDermott to consecutive balls from Pandya. That saw Australia slip to 76-3 after 10 overs.

Australia struggled to regain momentum, especially as it chose to bat the big-hitting Chris Lynn down the order, apparently to keep him from facing the spinners. Alex Carey helped the home side regroup, hitting 27 from 10 balls.

Marcus Stoinis added an unbeaten 25 from 15 balls and Nathan Coulter-Nile 13 from seven as Australia took 57 runs from its last five overs.

The Australian innings did not contain a six and the first of the match came in the fourth over of the India innings when Rohit flicked Coulter-Nile off his hip and deep into the packed grandstands.

Dhawan was the pacemaker, at one stage taking 24 runs in five balls with two sixes and three fours. After five overs India was 62-0 and well on the way to victory.

Zampa brought Australia back into the match when he took the wicket of Sharma. Again, when India threatened to get away, Tye produced the wicket of Rishabh Pant with his first ball and helped put the contest on a more level footing.

After 15 overs, India was 113-4 where Australia had been 107-4. But with Kohli still at the crease, the contest was very much in India's favor and he showed all of his experience in managing the run chase.

When things threatened to stall, he hit a four and a six off Tye in the 16th over to put India back on top.

India came to the last over needing six runs to win. Tye didn't concede a run from his first two balls but Kohli dispatched the next two for fours, the last one down the ground, to clinch India's victory and level the series.