TAIPEI (Taiwan News) -- Taiwan is currently feeling the impact of a northeastern monsoon, which will bring cool wind and rain through election day, while Tropical Storm Man-Yi (萬宜) has tilted toward Taiwan and Tropical Storm Usagi could affect the country as soon as Monday.

As a northeast monsoon lashes Taiwan, high temperatures in northern and eastern Taiwan have dropped by 9 degrees Celsius. The lowest urban area temperature recorded this morning was 15.8 degrees at Taoyuan's Tea Research and Extension Station, while Tamsui saw a chilly low of 17.2.

The northeast monsoon is expected to continue to bring cold and wet weather to Taiwan for the next three daysand lasting through election day (Nov. 24), according to the Central Weather Bureau (CWB). The CWB said that it is a combination of the arrival of a weather front and the northeast monsoon which is bringing the rain and cooler temperatures.

Temperatures will continue to drop on Friday, with the lows in northern Taiwan dipping to 17 to 18 degrees, while the highs in northern and northeastern Taiwan will only reach 21 to 23 degrees. There will be scattered showers over northern Taiwan, while skies will be cloudy over mountainous areas of central and southern Taiwan.

The wet and cold weather is expected to continue into election day as the tail end of the northeastern monsoon affects Taiwan. Temperatures across Taiwan will be chilly on Saturday morning, but should gradually rise during the day and the rain should gradually diminish. As of 2 a.m. this morning, Tropical Storm Man-Yi, the 28th tropical storm of the year, was 2,830 kilometers east-southeast of Taiwan and was moving northwest at a speed of 33 kilometers per hour (kph). The Man-Yi has a radius of 150 kilometers and is packing maximum sustained winds of 100 kph, with gusts of up to 126 kph.

Though the storm was originally expected to head far to the east of Taiwan, due to weak air flow and cold air in the north, Man-Yi's path will be variable over the next five days. It is not expected to affect Taiwan's weather in the short term, but continued monitoring is needed to determine its ultimate path.

A tropical depression hovering over the Philippines is expected to become Tropical Storm Usagi (天兔), the 29th tropical storm of the year today, and could possibly develop into a typhoon. Usagi is expected to move west toward Vietnam, and as it does so, the wind and rain of its periphery could affect Taiwan.

Depending on the amount of moisture brought by the periphery of Usagi, the plains and mountainous regions of central and southern Taiwan could see increased rainfall beginning on Monday. 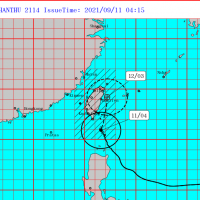