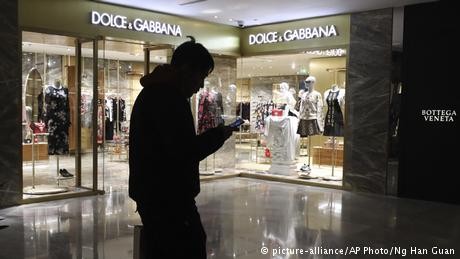 Dolce & Gabbana canceled a fashion show in Shanghai on Wednesday after a series of promotional videos were criticized as racist and full of outdated stereotypes by Chinese celebrities and social media users.

The controversial commercials, which have since been deleted from the company's Weibo account, featured a Chinese woman struggling to eat pizza and spaghetti with chopsticks.

The row was further compounded by screenshots circulating online appearing to show co-founder Stefano Gabbana making disparaging remarks about China while defending the promotional videos in an Instagram chat.

The Italian luxury fashion house apologized for the insulting remarks but said Gabbana's Instagram account had been hacked and the comments were not genuine.

"We are sorry for the impact and harm these untrue remarks have had on China and the Chinese people," it said.

In a statement from Milan headquarters, designers Gabbana and Domenico Dolce said: "What happened today was very unfortunate not only for us, but also for all the people who worked day and night to bring this event to life."

Earlier, a host of celebrities, such as actress Li Bingbing and singer Wang Junkai, said they would boycott the Shanghai show.

Zhang Ziyi, who starred in "Crouching Tiger, Hidden Dragon," said on social media that the Italian brand had "disgraced itself."

China is a critical market for luxury brands such as Dolce & Gabbana. Chinese customers account for over a third of all luxury purchases. That figure is expected to rise to 46 percent by 2025.

Dolce & Gabbana has 44 boutiques in China, including four in Shanghai.