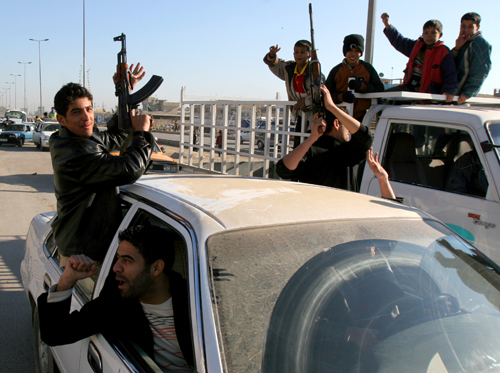 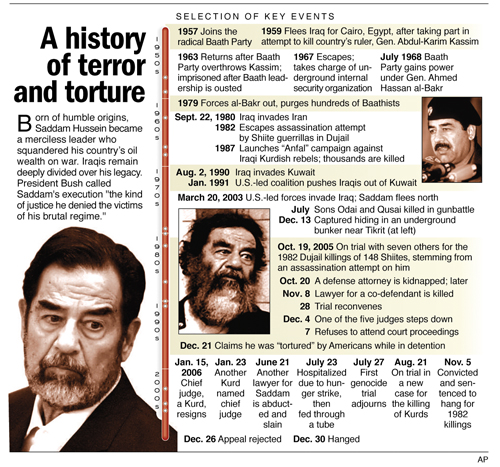 Saddam Hussein was hanged for crimes against humanity at dawn yesterday, a dramatic, violent end for a leader who ruled Iraq by fear for three decades before he was toppled by a U.S. invasion four years ago.
"It was very quick. He died right away," one of the official Iraqi witnesses told Reuters, saying the ousted president's face was uncovered, he appeared calm and said a brief prayer as Iraqi guards walked him to the gallows and put the noose round him.
"We heard his neck snap," Sami al-Askari, a political ally of Iraq Prime Minister Nuri al-Maliki, told Reuters after the indoor execution at a Justice Ministry facility in northern Baghdad.
As Maliki's fellow Shi'ite Muslims, oppressed under Saddam, celebrated in the streets, the prime minister called on Saddam's Sunni Baathist followers to end their insurgency. U.S. President George W. Bush hailed a "milestone" for Iraqi democracy.
"Saddam's execution puts an end to all the pathetic gambles on a return to dictatorship," Maliki said. "I urge ... followers of the ousted regime to reconsider their stance as the door is still open to anyone who has no innocent blood on his hands to help in rebuilding an Iraq for all Iraqis."
A Reuters witness said a car bomb exploded in a market in the Shi'ite city of Kufa in southern Iraq and there were many casualties.
Bush, who called Saddam a threat even though alleged nuclear and other weapons were never found, said: "Bringing Saddam Hussein to justice will not end the violence in Iraq, but it is an important milestone on Iraq's course to becoming a democracy that can govern, sustain, and defend itself."
The deaths of four troops pushed the American death toll to just four short of the emotive 3,000 mark. Bush already faces mounting public dismay at the war as Iraq slides toward all-out civil war between Saddam's fellow Sunnis and majority Shi'ites.
Despite fears of a backlash from Sunni insurgents, initial reactions were fairly muted as Iraqis woke to begin a week of religious holidays for Eid al-Adha. Unlike at previous times of tension, no curfew was imposed on Baghdad after the execution.
Jubilant Shi'ites, oppressed under Saddam, danced in the streets of Najaf and cars blared their horns in procession through Baghdad's Shi'ite Sadr City slum.
The main Sunni television channel in the capital gave little coverage to the news - though it did show old footage of Saddam meeting former U.S. Defense Secretary Donald Rumsfeld at a time when Washington helped Iraq against Islamist Iran in the 1980s.
State broadcaster Iraqiya on the other hand ran graphic footage of Saddam's agents beheading and beating their victims. It promised to air film of the execution later.
"He seemed very calm. He did not tremble," one senior witness to the execution told Reuters. Saddam, 69, was bound and shackled but his face was uncovered as he met his death.
The former president recited the Muslim profession of faith "There is no God but God and Mohammed is his prophet" but made no other remark as uniformed guards took him to the scaffold.
National Security Adviser Mowaffaq al-Rubaie told state television Saddam seemed to him "a broken man" on the gallows.
Saddam's appeal was rejected four days ago and the rapid execution will delight Shi'ites, but may anger Saddam's Sunni minority, as well as some Kurds who were hoping to see him convicted of genocide against them.
The execution was a triumph for Maliki, whose grip on his fragile national unity coalition has been questioned.
After complaints of political interference in the trial, however, the speed of the execution may fuel further unease about the fairness of the U.S.-sponsored process.
"The timing of the execution and the sudden way it has been done may irritate people," Saleem al-Jibouri, a spokesman for the main Sunni party in the national unity government, said.
Saddam's half-brother Barzan al-Tikriti and former judge Awad al-Bander will be hanged after the week-long Eid al-Adha holiday, which begins formally at noon, officials said.
Saddam's daughter Raghd, in exile in Jordan, wants her father buried in Yemen, a source close to the family said.
A senior Iraqi official said the family could claim the body. It might also be sent to Saddam's home town of Tikrit, where the governor had declared a four-day curfew.
U.S. troops are on alert for trouble from insurgents among Saddam's Sunni minority. While there were some protests at November's verdict by a U.S.-sponsored court, few Sunnis have deep feelings about the fate of the fallen strongman.
An execution at the start of Eid is highly symbolic. The feast marks the sacrifice the prophet Abraham was prepared to make when God ordered him to kill his son and many Shi'ites could regard Saddam's death as a gift from God. Such symbolism could further anger Sunnis, resentful of new Shi'ite power.
Saddam was found guilty over the killing, torture and other crimes against the Shi'ite population of the town of Dujail after Shi'ite militants tried to assassinate him there in 1982.