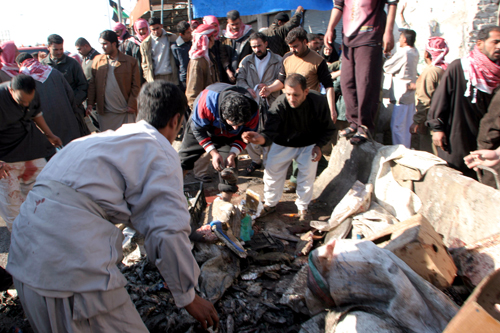 A bomb planted on a minibus killed 17 people in a fish market in a mostly Shiite town south of Baghdad yesterday, while police imposed curfews in some Sunni areas to prevent any outbreak of violence after Saddam Hussein's execution.
The blast occurred in Kufa, a Shiite town 160 kilometers south of the Iraqi capital, but there was no indication it was related to Saddam's death. At least 26 people were wounded, said Haidr Nahi, service director of the al-Furat al-Awssat Hospital where victims were taken.
Television footage showed hundreds of men in traditional Arab headdresses swarming around the vehicle's charred frame, toppled on its side in the street. Ambulances and fire trucks pulled up to the site, and a coffin could be seen being loaded onto the top of a car.
The U.S. military announced the deaths of three Marines and two soldiers, making December the year's deadliest month for U.S. troops in Iraq with the toll reaching 108.
The Marines, all assigned to Regimental Combat Team 5, died Thursday of wounds from fighting in western Anbar province, the U.S. military said. A soldier assigned to 1st Brigade, 1st Armored Division and also died in combat in Anbar, and another was killed by a roadside bomb in a northwest section of Baghdad, the military said.
Their deaths pushed the toll past the 105 U.S. service members killed in October. At least 2,997 members of the U.S. military have been killed since the Iraq war began in March 2003, according to an AP count.
Saddam was hanged early yesterday, after his conviction last month for crimes against humanity in connection with the 1982 killings of 148 Shiites. Iraqi and American officials have expressed concern about the potential for a spike in unrest, but Saturday's violence was not heavier than usual.
Curfews were enforced in Saddam's hometown of Tikrit and in Samarra, both in the predominantly Sunni Salahuddin province north of Baghdad.
On Friday, a suicide bomber killed at least nine people near a Shiite mosque in Baghdad, and 32 tortured bodies were found across the country.
American troops killed six people and destroyed a weapons cache in separate raids Friday in Baghdad and northwest of the Iraqi capital, the U.S. military said. One of the raids targeted two buildings in the village of Thar Thar, where U.S. troops found 16 pounds of homemade explosives, two large bombs, a rocket-propelled grenade, suicide vests and multiple batteries, the military said.
Iraqi forces backed by U.S. troops entered a mosque southeast of Baghdad, capturing 13 suspects and confiscating weapons, the U.S. military also said.
December was also shaping up to be one of the worst months for Iraqi civilian deaths since The Associated Press began keeping track in May 2005.
Through Thursday, at least 2,139 Iraqis have been killed in war-related or sectarian violence, an average rate of about 76 people a day, according to an AP count. That compares to at least 2,184 killed in November at an average of about 70 a day, the worst month for Iraqi civilians deaths since May 2005. In October, AP counted at least 1,216 civilians killed.
The AP count includes civilians, government officials and police and security forces, and is considered a minimum based on AP reporting. The actual number is likely higher, as many killings go unreported.