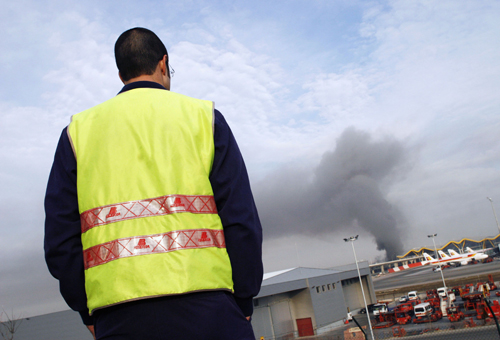 A bomb exploded yesterday at Madrid airport, injuring two police, in an attack claimed by the Basque separatist group ETA, officials and media said.
If confirmed, it would be the first attack by the Basque militants since it declared a ceasefire in March.
The bomb in a Renault van exploded in a car park at Madrid airport at about 9:00 a.m., witnesses said.
The explosion was heard several kilometers away and a large column of black smoke rose above the airport's new terminal four. Flights were halted and witnesses said all access roads to the airport were closed by police.
Police had sealed off the zone around the van after an anonymous caller, saying he was speaking for ETA, telephoned Basque road safety authorities to warn that the bomb had been placed, a Basque officials said.
The Madrid fire brigade was also warned about the bomb, police said.
ETA often uses the Basque emergency road service to warn of imminent attacks.
Media reports said two police, who were near the van when it exploded, suffered minor injuries. This was not confirmed by authorities.
The armed Basque separatist group has observed a ceasefire since March 24 and has not claimed responsibility for any blasts since March 9.
The new attack came amid increasing doubts about the state of attempts to convince ETA to make a permanent peace accord. The militants have been fighting for almost four decades for a Basque state in northeast Spain. Their attacks have left about 850 dead.
On Friday, Spain's prime minister predicted an improvement in the Basque region in 2007 following a start to dialogue with ETA.
"The situation will be better in a year," Prime Minister Jose Luis Rodriguez Zapatero told journalists, reporting that negotiations were proceeding "discreetly."
But the population of the northern province proved less optimistic about peace prospects, according to a latest opinion poll.
This reported 64 percent of Basques believed it possible that ETA might resume its campaign of violence.
Zapatero insisted that the situation had improved.
"It's better with a permanent ceasefire than when bombs go off as was happening a year ago," the Socialist prime minister commented.
"It's also better than four or five years ago when we had tragic lethal attacks."
ETA's last killing was in May 2003.
But many observers are skeptical about whether ETA really wants to negotiate an end to violence.
Doubts have been prompted by developments including a recent arms theft in France for which ETA was held responsible, the discovery of an arms cache in the Basque country, and a return to street violence in the province.