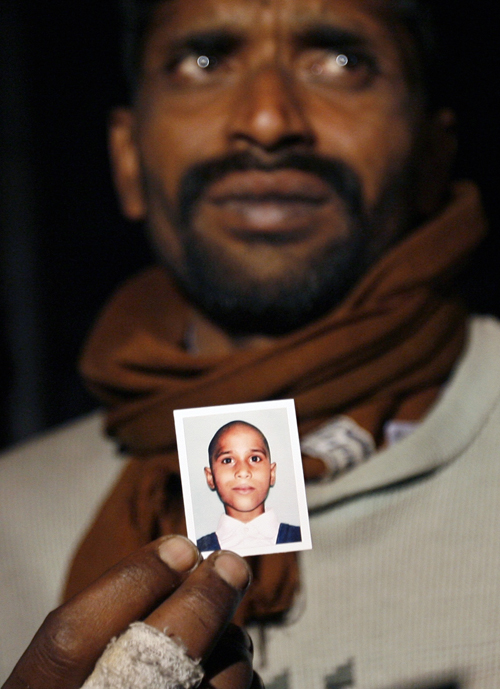 Indian police said yesterday they have discovered 15 skulls at a house near New Delhi where a domestic servant has confessed to sexually assaulting and killing children and women.
The servant, who police referred to as Satish after his arrest Friday, confessed to killing at least nine children and five women, said a police officer associated with the investigation.
The man admitted beheading his victims after sexually assaulting them. He then dumped their body parts either in the backyard of the house or into a sewer drain in front of it, said the officer, who didn't want to be named because he was not authorized to speak to journalists.
Residents of Noida, a township east of New Delhi, said 38 children had gone missing in recent years from the neighborhood around the house. Yesterday's recovery heightened fears that the accused could have killed more children.
Police officer Ramesh Bharatiya said investigators had so far found 15 skulls in the house and parts and bones from an undetermined number of bodies dumped in the yard around the suspect's home.
Plastic bags containing bones, bracelets and clothes were discovered as they dug in the drain in front of the house yesterday.
The owner of the house was also arrested, but it was not immediately clear if he was involved in the crimes.
Satish was traced after he started using a missing girl's mobile phone, and when police went to his house, they were tipped off to the bodies by the smell of decomposing corpses, Noida's police chief, R.K.S. Rathore, told reporters Friday.
Rathore said Satish - who was yesterday still being questioned by police - admitted to luring children to the residence with chocolate and sweets.
Residents of Noida blamed police for not acting on complaints about missing children.
"We told police that we suspected this man, but they repeatedly ignored our complaints," said Kuldeep Kumar, whose 4-year-old nephew has been missing since February 23.
Most of the missing children belonged to impoverished families.
"We are poor people. We can't go to the police station every day," Kumar said.
Anger among local residents exploded as some demanded the alleged killer be handed over to them. "We will kill him," said Kamlesh who goes by one name, whose 8-year-old daughter has been missing since July. "We will cut him into pieces."